The UK’s largest supermarket chain faces the threat of strike action by thousands of distribution staff at more than half its depots in the busiest week of the year.

Workers at 13 out of 22 Tesco regional distribution centres across the UK have voted in favour of strike action over pay, showing the rising power of distribution industry workers in a tight labour market.

Staff in Livingston, Scotland will strike from December 20 only, while those in two locations in Northern Ireland will walk out on December 16.

Those represented by Usdaw, the shopworkers’ union, at nine sites, including the Livingston facility, will also strike from December 20 until Christmas Eve.

Tesco has offered both sets of workers a 4 per cent pay rise, but the unions have pointed to the latest retail price inflation figure of 6 per cent. Unite also recently secured a 5 per cent pay rise for distribution centre workers at rival Wm Morrison.

“Our members have sent a clear message”, said Joanne McGuinness, Usdaw national officer. “We hope that the company is listening and that they will return to the negotiating table with a better deal.”

Sharon Graham, secretary-general at Unite, said her members “have gone above and beyond the call of duty to keep Tesco’s shelves filled throughout the pandemic”.

“At the very least, the UK’s largest and wealthiest retailer should be making our members a decent pay offer.”

Christmas Day falls on a Saturday this year, giving the unions more leverage because that leaves a full trading week beforehand. Supermarkets have already dispatched long-life goods such as alcohol and Christmas puddings to stores earlier than usual, so that distribution capacity can be prioritised for fresh produce in the final week. 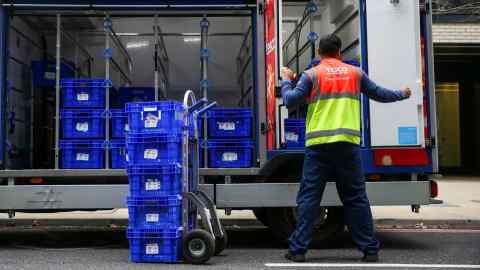 The increased militancy of distribution staff is partly a reflection of their growing power in the labour market. Thousands of eastern European workers are thought to have returned to their home countries during the pandemic, leaving many retailers needing to push up pay rates to attract and retain both warehouse staff and truck drivers in addition to their seasonal hiring in stores.

Hourly rates vary by location at Tesco, but they are above the £9.55 per hour benchmark paid to store staff — a discrepancy that is common to all supermarkets and the basis of several large equal-pay lawsuits currently moving through UK courts.

Tesco said it recognised that distribution staff “have worked tirelessly through the pandemic” and that the pay offer it had made, one of the highest in the past 25 years, “is a fair recognition of this”.

It added that it was “disappointed” by the votes for strike action but had “contingency plans in place to help mitigate any impacts. We have worked hard to deliver Christmas for our customers and are confident we will be able to fulfil our plans.” 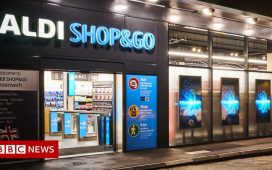 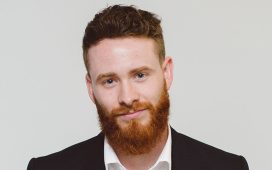