Tell-tale body language signs that someone is into you


Look, it’d be great if everyone would just clearly state when they fancy the pants off us.

But alas, we are awkward beings who, whether out of an attempt to be mysterious or a fear of rejection, keep schtum about our romantic feelings.

How can you tell if someone is attracted to you, if they won’t just come out and say it?

Body language is key, say the team at Busuu, a language-learning community.

‘First dates can be a nervy affair and it can be really difficult to gauge whether somebody likes you straight off the bat,’ say the site’s experts.

‘It’s important to not only be able to recognise these visual cues but to actually demonstrate them yourself.

‘Eye contact, an open body stance, and a warm smile are all perfect non-verbal cues to show your date that you’re attracted to them, but you’re also being attentive and care about what they have to say.’

So, what non-verbal signals should you look out for?

The Busuu team reckon this is a ‘subconcious action that can be a key indicator that your date may be sexually attracted to you’.

When you’re attracted to someone, you’ll get a surge of dopamine that can make your pupils dilate.

The difficult thing is spotting this. Do you know what size your date’s pupils usually are? It’s unlikely.

Perhaps just bear this in mind as you gaze into each other’s eyes – teeny-tiny pupils probably aren’t promising.

This is far easier to spot. If they’re maintaining good eye contact with you, not only may they be attracted to you, but they’re also trying to be sincere, listen to what you say, and make a real connection. All good things.

‘If your date seems to be leaning in – both when you’re talking or if they close the space between you – it shows they’re interested in you and they’re engaged in the conversation,’ say the experts.

‘On the other hand, if the person seems to be keeping their distance, they aren’t necessarily not attracted to you. First dates can extremely be daunting and physical distance could just be a result of nerves or shyness.’

An easy one. Smiling shows happiness, which definitely happens when you’re interacting with someone you fancy. You know this.

‘There is a good chance that if your date is lost for words, they might be anxious and a little nervous, too,’ say the Busuu team. ‘People can become tongue-tied when they find someone attractive.’

Their toes are pointing towards you

You’ve probably read this one before, but if you are struggling to get a read on someone’s feelings, take a quick peek at their feet.

If they’re pointed your way, they’re at the very least engaged in what you’re saying.


MORE : 10 mistakes you’re probably making on dating apps (and what to do instead)


MORE : How to deal with IBS when dating and staying the night

See also  Leading questions: 'Should I make contact with my father, whom I have never met?'
Share on FacebookShare on TwitterShare on PinterestShare on Reddit
newscabalSeptember 11, 2021 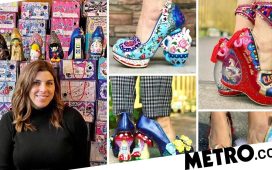 Self-confessed shoe addict has collection of 500 pairs worth over £30,000

10 of the best autumn sun holidays in southern Europe

Shimmer in silver makeup – but keep it modern

I was seeing a man for a few months. Why am I so heartbroken?

Breaking up, but living together: how lockdowns lead to ‘nesting’