US conglomerate General Electric has confirmed it will build an offshore wind blade manufacturing facility in Teesside — creating 750 jobs — after the area was named as one of eight low-tax free ports in last week’s Budget.

The factory is expected to open in 2023 to supply the Dogger Bank offshore wind project 130km off the Yorkshire coast, which will become the world’s biggest scheme of its kind when completed in 2026

Confirmation of GE’s plans, first reported by the FT in November, is the first big investment in offshore turbine-making in the UK for five years and comes as a big boost to Boris Johnson’s environmental agenda.

The British prime minister has pledged to attract £20bn of investment in offshore wind by 2030 as his government seeks to quadruple capacity to 40 gigawatts as part of its promise to create green jobs.

While the UK has the world’s biggest offshore wind market, just 29 per cent of the capital expenditure, which accounts for the lion’s share of overall spend on these projects, goes to British suppliers.

But the choice of Teesside will leave other areas of the UK, including Humberside and Scotland that had sought to woo GE, disappointed. Questions around how Scotland in particular can capture more offshore wind work have intensified after BiFab, a producer of giant foundations for offshore turbines, collapsed into administration last year although two of the company’s yards have since been rescued.

The government said GE had selected Teesside in part because of its new free port status alongside £20m in state funding to create the Teesworks Offshore Manufacturing Centre next to the port, where the blade-making plant will be built.

The port upgrade was one of two announced for the east coast of England on Wednesday. Another £75m will help fund the construction of the Able Marine Energy Park at Immingham on the river Humber. The two investments could create up to 6,000 jobs.

But despite the boost provided by the GE announcement, Johnson is facing criticism from environmentalists on several fronts.

On Wednesday, green campaigners accused the UK government of failing to deliver on its pledge for a “green Brexit”, calling into question the government’s commitment to maintaining EU-level environmental standards in the future.

A coalition of 12 leading environmental groups including WWF, Friends of the Earth and the Marine Conservation Society, warned that the government’s landmark Environment Bill could “erode vital safeguards” for people, plants and animals.

Their intervention came in response to the launch of a government consultation around “five principles” that would underpin future government policy following the UK’s departure from the EU.

The work fronted by environment secretary George Eustice is designed to develop a draft policy on how to apply the five tenets, including “polluter pays” and the so-called “precautionary” principle that takes a “better safe than sorry” approach to regulating environmental impacts.

But Ruth Chambers of the Greener UK coalition — which also includes the National Trust and the Royal Society for the Protection of Birds — said the draft policy concealed loopholes that left the door open to the degradation of standards.

The group said that compared with EU law — which bound all ministers and UK authorities to consider the five principles when making decisions that would affect the environment — the UK draft would reduce the scope, placing a legal duty only on some ministers.

Carve-outs for the Treasury and defence ministry could have ramifications for big infrastructure projects, or potentially protected nature sites, they added.

“This [draft policy] statement means the environment will now be considered an afterthought. It will erode vital safeguards that keep people safe and protect wildlife,” said Chambers.

Johnson is keen to burnish Britain’s commitment to its 2050 “net zero target” ahead of the UK hosting the COP26 global climate talks in Glasgow in November.

But over the last week, the prime minister has ditched his green agenda in favour of more populist offerings. The Budget confirmed a freeze on fuel duty for the 10th successive year as ministers shied away from angering motorists during the pandemic. 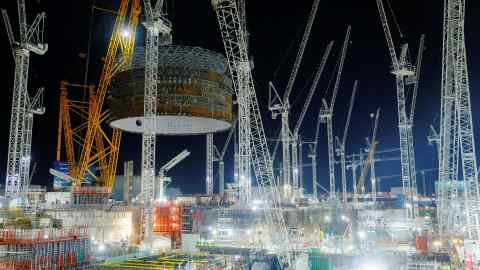 Bright Blue, a moderate Conservative think-tank, described the move as “unnecessarily expensive” and warned that it undermined “the UK’s global leadership on climate ahead of the vital COP26 summit.”

This week, Johnson authorised a consultation to halve the “air passenger duty” paid by people taking domestic flights to try to help the ailing aviation industry. Jenny Bates, climate campaigner for Friends of the Earth, said the decision “beggars belief” as it would encourage more flying.

Sam Hall, director of the Conservative Environment Network, said he understood the urge to help the aviation sector, but said the government was “going in the wrong direction with this particular policy.”

Similarly, ministers have remained silent over the controversy for a new deep coal mine in Cumbria — which would be Britain’s first for 30 years — despite their avowed determination to phase out coal use.

Meanwhile, the CBI will urge ministers on Thursday to do more to punish polluters. Britain’s biggest business lobbying group will call on Johnson to overhaul the tax system to motivate greener behaviour, with a review of fuel duty alongside reform of business rates, VAT and capital allowances to encourage companies to invest in low carbon buildings and zero emission vehicles.

The CBI wants a comprehensive review into fuel duty to create “a progressive tax system based on real world data to incentivise low emission driving.”

What is behind the dispute over fishing rights around Jersey?