The most topical joke of the night is about partygate, but even without it, John Godber’s play could hardly be more on the nose. The playwright has not just warmed over Teechers, his widely performed 1987 comedy, he has fast-tracked it into today – Ofsted inspections, hand sanitisers and all.

To mark the 50th anniversary of Hull Truck and the 35th anniversary of the play, Teechers Leavers 22 hits home not only with the same laughter and punchy theatricality as the original but also with the same political rage. The faster the jokes come about unruly pupils and unrulier staff, the more the anger builds at an education system custom-built to sell young people short.

Godber, who has just had the adjacent studio theatre named after him, began his career with a string of stripped-back physical comedies that put the focus on the actor. Here, in Mark Babych’s production, he fields just three performers to give life to a post-pandemic Whitewall College where the kids have recently done their BTec drama exam on Zoom.

Levi Payne, Purvi Parmar and Martha Godber are like the primary coloured strips on Caitlin Mawhinney’s assembly hall set: bright sparks hopelessly trying to make the place look less institutional. Together, they are a formidable unit. Tight and joyful, they allow each other space for swaggering solo turns without ever letting the rhythm drop between them.

They are gobby as the pupils and flustered as the teachers, switching between parts with dazzling speed. In a role first taken by her father, Martha Godber plays a working-class drama teacher who dares to see the potential in the disillusioned pupils. But winning them over turns out to be a lot easier than conquering a school hierarchy that, with its eyes on “specialist technology status”, sees creativity as an optional extra.

What defeats her is not Parmar’s Oggy Moxon, the lumbering school thug, nor Payne’s infatuated Salty, doing his homework on his mobile phone for want of a computer. It is the injustice of an education system that favours the privileged. Over the road, St George’s private school flourishes while the Whitewall kids are abandoned. A raucous comedy ends on a note of bitter, wordless fury. 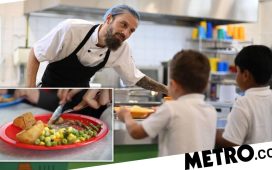