It was all over bar the shouting, but there was plenty of shouting to come. Schalke had finally come to the end of the Bundesliga road at Arminia Bielefeld and though the final destination was not a surprise, it was still hard to take. Youth product Timo Becker wept on the bench and the general manager, Gerald Asamoah, a hero on the pitch in better times, only just held back his own tears in front of the television cameras.

“We knew what to expect,” said Asamoah after relegation was confirmed. “But when the time finally comes, when you realise it’s now over … that’s brutal.” His words would have been fitting final ones for the evening, but it wasn’t over. Between 500 and 600 supporters were waiting at Veltins-Arena as the squad returned from Bielefeld at around 1am, and what began as a civil exchange quickly escalated with objects thrown at the players and police intervention required.

A club statement issued on Wednesday morning made it clear they understood the emotion of the situation but underlined that “some currently unidentified individuals overstepped boundaries that are non-negotiable for FC Schalke 04” and promised a full investigation, while the Players’ Alliance formed in the aftermath of lockdown also condemned the attacks. “I just ran,” one anonymous player told Sport1. “Some of us have been kicked and kicked. I’m shocked and don’t know how we can play the next games.” Some players are reportedly upset that the club put them in the position to be confronted by angry supporters in the first place.

Now is an opportunity for reflection and to calm tempers. There will be no immediate aftermath, with scheduled weekend opponents Hertha Berlin still in quarantine; their next match, rearrangements notwithstanding, will not be until 8 May at Hoffenheim, one of the two red-faced losers to Die Königsblauen this season. One would not bet on a repeat, but more important is the time in between now and then.

With four matches left in this season from which it is impossible to save any pride, the balance sheet reads two wins, seven draws and 21 defeats. If there is any relief it is that Tasmania Berlin, promoted with little notice ahead of the 1965/66 season, will remain statistically the worst team in Bundesliga history (and Tasmania are relieved about that too, having built the club’s whole branding around that hapless campaign). But they still need a win or two more draws to beat the second-worst season ever recorded, by Wuppertal in 1975 (when two points were awarded for a win).

The minority’s expression of their despair might have been unacceptable yet it was an indicator of how deeply the pain of not just the last season, but of the past 18 months, has been felt. In a week where football conversation has been taken over by a prospective Super League – a discussion in which Schalke’s name would have merited at least a mention in dispatches in the not too distant past – their fall is still remarkable. Mesut Özil, Jermaine Jones and Julian Draxler were among the club’s high-profile former players who expressed sorrow about the relegation on social media.

How did it come to this? On the pitch, Schalke said goodbye with barely a whimper. They rarely looked as if they had a foothold in Tuesday night’s game at last season’s second-tier champions Arminia, the pre-season relegation favourites and no stranger to money worries themselves but still fighting the odds, a concept that seems foreign to the current set of players wearing royal blue. Fabian Klos scored Arminia’s winner and missed the chance for a second from the penalty spot – denied by Ralf Fährmann, who was cast off last season but has been one of the team’s rare saving graces in recent months. Short of a late effort slashed over by Sead Kolasinac, the visitors created next to nothing. “The performance in the (game) in East Westphalia matched the entire Schalke season,” wrote Kicker’s Schalke correspondent, Toni Leito. “It was not suitable for the Bundesliga.”

One wonders how much that etiquette will stick to some of these players, wherever they might end up next season. Many of them were once valued but they have simply not turned up week after week. Nine of Tuesday’s starting lineup have played in the Champions League, seven of them for Schalke. “Everyone in this team has to question themselves,” said Asamoah. “If you’re bottom of the table and have 13 points, and if you say you gave everything, then I don’t know what I would do with such a person.”

A loyal support has been resigned for a while. Der Westen reported this week that plummeting viewership of Schalke matches has become a concern for Sky, with the broadcaster recording fewer than 40,000 viewers for last weekend’s 4-0 hammering at Freiburg. It was the third successive match for which the team has attracted an audience of less than 50,000. One of the best-supported clubs in Germany, they typically pull in upwards of 600,000 in the good times.

There is, ostensibly, a plan in place. Dimitrios Grammozis was appointed as the club’s fifth coach of the season last month, with regrouping in the second tier very much in mind. Yet some are nagged by the sense that even a small involvement in this season’s catalogue of failure, which has very little to do with Grammozis, could cling to him if some seeds of future success are not sown before the summer.

“Even after the game against Freiburg,” said Grammozis before Tuesday’s loss, “I can’t say that I get the feeling from any player that he doesn’t want to give everything for the club every day.” Many supporters would beg to differ. A lot needs to change for Schalke not to become the next Hamburg – the former top-flight ever-presents fighting desperately to avoid a fourth straight season in the second tier – or something even worse. 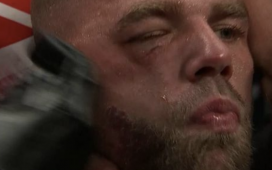 Saunders' corner interaction with trainer before Canelo fight was stopped 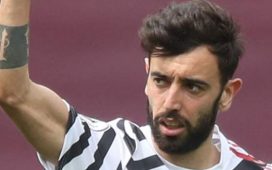 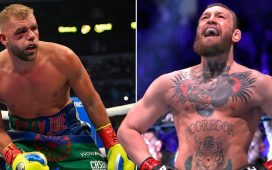 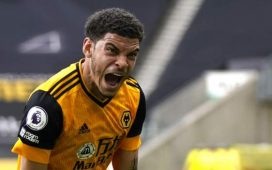