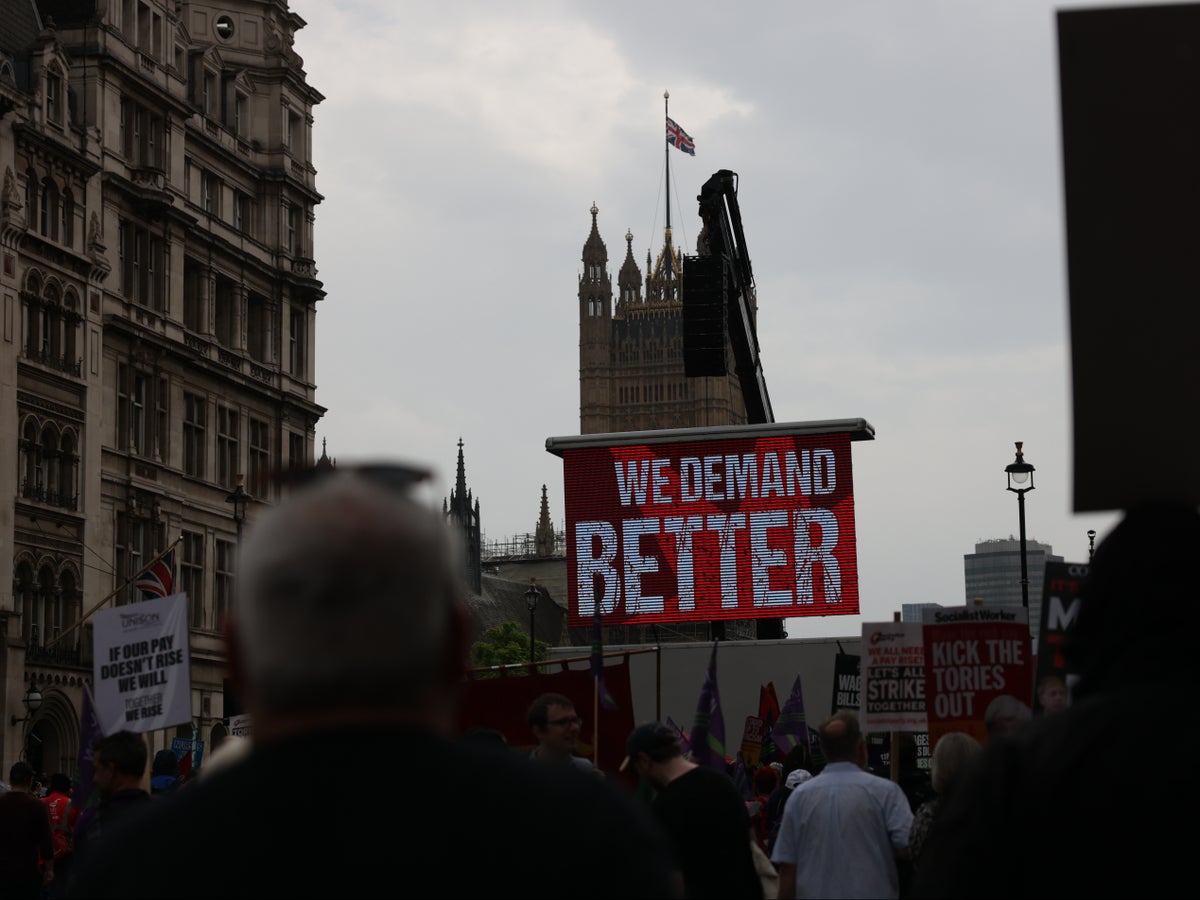 Union bosses have warned about the prospect of strike action among teachers and NHS staff if the government does not boost pay amid soaring inflation.

It comes as Britain braces for disruption on the railways as staff stage mass walkouts on National Rail and Tube lines next week.

Thousands of public sector workers took to Parliament Square on Saturday to call for more support during the cost-of-living crisis.

Among those were teachers, whose union bosses are calling for a pay uplift.

Kevin Courtney, joint general secretary of the National Education Union, toldThe Observer it planned to ballot members unless it received a pay offer much closer to inflation by Wednesday.

Unless the government significantly increased what was floated by the education secretary earlier this year, members would be balloted to gauge reactions and a second ballot could be held on strikes, he said.

“If there is no significant improvement on 3 per cent – which will leave an 8 per cent gap with inflation this year alone – we cannot avoid a ballot,” he told the newspaper.

“The mood among teachers has changed. Last year the issue was mainly workload. This year it is workload and pay.”

He added: “Teachers are doing calculations to see what their hourly pay works out at. Pay is already down 20% on 2010. The strains are showing. One in eight of new graduate teachers are leaving in their first year.”

The NASUWT teaching union said it would also ballot members for industrial action if the pay increase fell short of demands. The union is asking for 12 per cent, given the current cost of living crisis.

“Teachers are suffering, not only from the cost of living crisis, which the whole country is grappling with, but 12 years of real terms pay cuts which has left a 20 per cent shortfall in the value of their salaries,” its general secretary, Dr Patrick Roach, said.

He added: “We will not allow cuts to our members’ pay and attacks on their pensions. If a pay rise is not awarded, it will be won by our members in workplaces through industrial action.”

Unison, the country’s biggest union which counts NHS staff among its members, has also reportedly warned the government there could be industrial action in hospitals without a pay deal close to inflation.

“The government has a simple choice,” Christina McAnea, its general secretary, she said.

“Either it makes a sensible pay award, investing in staff and services and reducing delays for patients. Or it risks a potential dispute, growing workforce shortages and increased suffering for the sick.”

The Department for Education spokesperson said: “We are taking action to support teachers to stay in the profession and thrive, working to deliver pay increases and pay awards for new and experienced teachers.”

They said it had invested £760,000 into a new mental health support scheme for new leaders and had launched a wellbeing charter that commits to reducing unnecessary workload and championing flexible working.

The Department of Health and Social Care said: “NHS staff received a 3 per cent pay rise last year, increasing nurses’ pay by £1,000 on average despite a public sector pay freeze, and we are giving NHS workers another pay rise this year.

“No decisions have been made and we will carefully consider the recommendations from the independent pay review bodies.”

‘I thoroughly enjoyed it’: man sits GCSE maths exam at 92