Tu Ching Liang adjusts his yellow novelty hat, as disco lights bounce off the medical mask across his face, and speeds up his taxi.

“No one is as lucky as me, walking out the door every day rushing to go to work and not make any money,” he says, laughing.

It’s a cold day in central Taipei. Three weeks of near constant rain have worn people down and they morosely splash through shallow puddles and struggle with their umbrellas against the wind. But inside Tu’s yellow taxi – identifiable from the outside by a pink neon star on the dashboard – it’s warm and we’re listening to a previous passenger gleefully warble Despacito.

In a city that loves to sing you can find karaoke just about anywhere, including in numerous taxis. The local taxi app even has “karaoke” as a selection alongside “English-speaking driver” or “wheelchair accessible”. Stumble off the pavement and into a car, and you might find a microphone thrust into your hand and an iPad ready to play Youtube clips of any song you can think of, with lyrics.

“I’ve been driving a taxi for 27 years, giving money [as rewards for singing karaoke] for eight years, and filming videos for six years. I’ve filmed 10,000 videos,” he says.

“I was on TV shows from 10 different countries.”

To get into Tu’s taxi is to make a deal. Sing for your chauffeur. If you don’t sing you don’t get a discount, and you can’t win any prizes, or start recording an interview for the Guardian … I panic and can’t think of a song so Tu chooses for me and it’s a punishment: Celine Dion’s My Heart Will Go On.

Tu says many people are too embarrassed to sing, but he pushes them anyway. “It’s to train their courage. To train them become a superstar,” he says with phenomenal optimism.

He only occasionally gives forewarning that the speakers are on the outside of the car and turned up loud.

If Tu likes a singer’s effort he’ll discount the trip for them, sometimes giving a cash prize. Usually, people tip him more than the fare would have been.

What began nearly a decade ago as a game, offering passengers a discount if they could guess a song title, has evolved into something of a social media empire. Cameras inside Tu’s car capture every performance – the good, the bad, the shy, the drunk – which he uploads to YouTube. Some have been watched more than 2m times.

“I’m an international influencer,” he says, erupting into laughter again.

As we drive around the eastern districts looking for passengers Tu scrolls through some of his favourite and famous passengers. He claims to have discovered the singing career of Edward Chen, a Taiwanese actor and heart-throb who Tu claims (with some creative licence) was given a recording contract after his karaoke taxi performance.

“People pay to go to concerts and see people sing, but here they pay me to sing to me,” he says. His dream is to one day have Ed Sheeran as a passenger.

The car pulls up outside a bar and Tu pulls out the microphone. “Anyone wants to be on TV? Anyone? You can get on British media. Do you want to? Can you sing?”

It’s mid afternoon and there are no takers. “People at night are more brave,” he says.

In these pandemic days, Taipei life is comparatively normal by international standards – until last month, it hadn’t recorded a locally transmitted case since April – but there are no tourists because of the border restrictions. Tu says it hasn’t affected him too much even with competitors driving around, and he mostly relies on local business.

“Taiwanese love singing,” he says. “So it’s normal there are many [taxis with karaoke]. But it’s hard to both film and sing, like what I do. And police can fine me for the speakers outside. That’s also difficult.”

At the end of the day Tu agrees not to inflict my murder of the Titanic song on the internet, but he can’t help having one last laugh, and as he drives away the recording blasts through the taxi’s external speakers. Maybe it’s the weather-induced despondency, or maybe everyone is just used to seeing Tu in the traffic, but thankfully no one seems to notice. 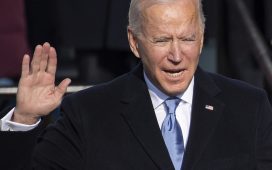 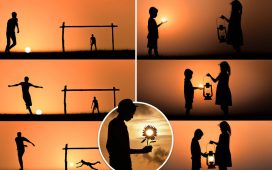 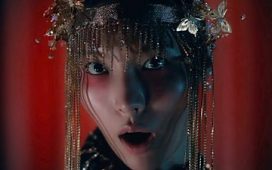 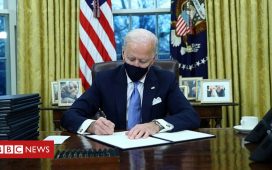 Biden gets to work on reversing Trump policies with executive orders