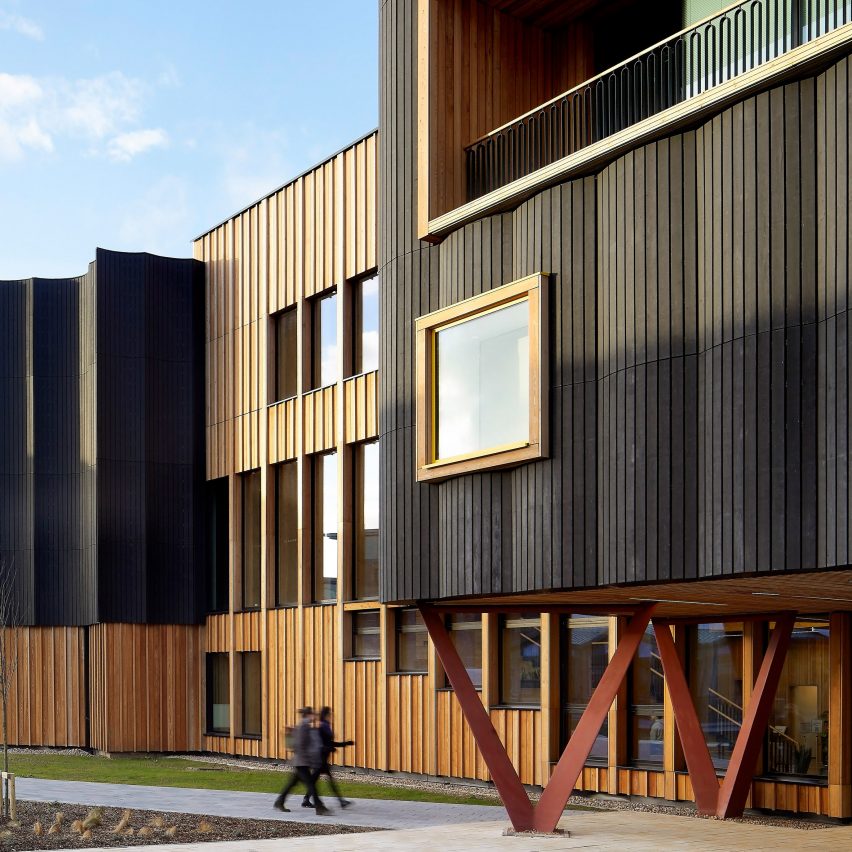 The building, located at the heart of the inner-city campus in York, provides the university with teaching facilities for its music and computer science departments.

Externally, the Creative Centre is distinguished by its facades, which are decorated with various timber finishes to create what Tate+Co calls a “supertexture”.

This mix of cladding, including black-painted larch, denotes the different facilities housed inside and is also an effort to break up the building’s visual mass.

“You want to have a bit of texture, a bit of variation and light and shade,” he continued.

“If you do that vertical cladding across a whole wall, you lose it somehow, it just doesn’t work,” Tate told Dezeen.

The Creative Centre was commissioned by York St John University to replace some of its dated student accommodation on the site that was no longer required.

Its entrance is positioned on the right-hand side of the front elevation, marked by V-shaped columns that are angled inwards to encourage people to enter.

There is a large adaptable theatre, a recital room and TV studio, alongside a number of smaller rehearsal rooms and computer suites.

The spaces for the different departments are divided into three semi-independent blocks – two positioned at the front of the building and one along the back – which make up the building.

They are distinguished externally and internally by their different forms and facade finishes but linked by a large central atrium at the building’s heart.

The atrium, described by the studio as a “living room”, is fitted out with bleacher-like seating and lit by large windows and skylights in its glulam roof. It is designed to be used as anything from a casual breakout area to a flexible teaching space or theatre foyer.

“It’s not just circulation space, it’s designed as third spaces that act as areas where students can come out and different departments can bump into each other,” said Baker-Falkner.

The building’s structure is largely built from glulam and cross-laminated timber, which is exposed internally and combined with steel and concrete elements.

Timber has been used throughout to add warmth to the spaces, while also reducing the embodied carbon of the project.

The structure was developed by Tate+Co with the engineering firm Atelier One to achieve large spans, ensuring each floor is column-free.

This makes the structure easily adaptable and extendable, enabling the university to reconfigure the building into wide-open spaces or more cellular divisions to meet its future needs.

Another highlight of the building is its 200-seat auditorium, designed to host live performances by students as well as community events.

Inside, there is a generous stage with a fully-accessible technical level overhead, enveloped by wood-lined curved walls that help to enhance acoustics. 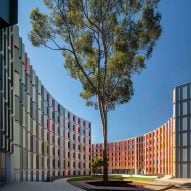 The proximity to the York Minster cathedral is celebrated throughout the Creative Centre through carefully placed windows in the atrium, recital hall and critical listening room, as well as in some of the timber detailing.

Another collaborator on the project was the design consultancy Atelier Ten, with which Tate+Co collaborated to achieve BREEAM Excellent, which is the second-highest rating awarded by the sustainability performance framework BREEAM.

The Creative Centre is complete with a landscape design that links it with the adjacent teaching space called the Design Centre.

A wider masterplan for the site, which is now under development, will also see a wildflower meadow introduced beside it while establishing the building as a central hub for the university.

Other recently completed university buildings featured on Dezeen include an aluminium-clad facility at the University of Cambridge by Jestico + Whiles and a pair of Columbia Business School buildings by Diller Scofidio + Renfro.

Elsewhere, Grafton Architects recently completed the Town House for Kingston University, which became the first university to ever win the Mies van der Rohe award. The award jury said its win “shows that there is a need for public educational projects with the quality of this one”.

The photography is by Hufton+Crow.

Cracking the code to sending a letter | Letters

MYOP in Arles 2022: Work in Progress – in pictures

‘Eventually it will just be a barcode, won’t it?’ Why Britain’s new stamps are causing outrage and upset

‘Gods that walk among us’: the photographer bringing glamour to portraits of community leaders

Dying of Covid, my 93-year-old artist father was given hours to live. Surely he couldn’t paint himself out of this one? | Nigel Featherstone

In the Black Fantastic review – spectacular from first to last