Tallulah Willis is a buzzed beauty after her famous father Bruce Willis, 65, treated her to a dramatic haircut on Tuesday night during their self-isolation with mom Demi Moore, 57.

In the snapshots, Tallulah proved to be the spitting image of Demi from her G.I. Jane days as she posed stoically before a scenic backdrop. 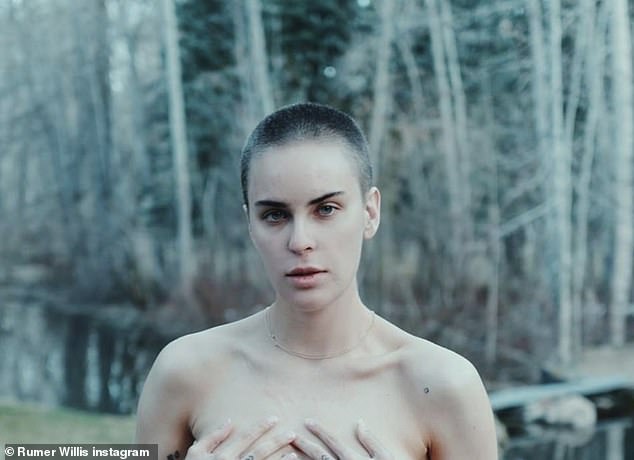 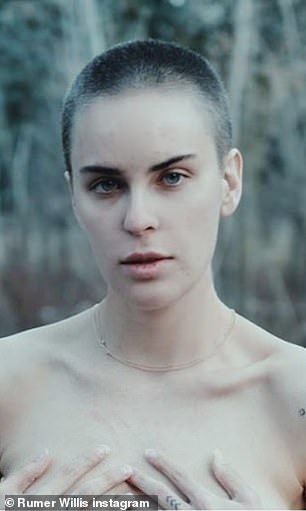 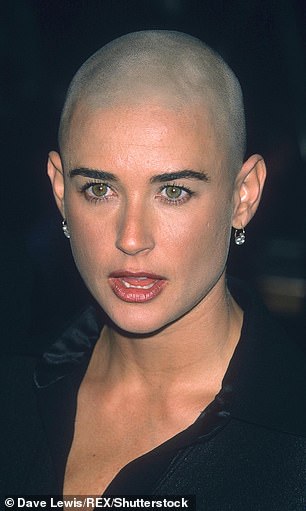 Double take: In the snapshots, Tallulah proved to be the spitting image of Demi from her G.I. Jane days as she posed stoically before a scenic backdrop; Demi (right) in 1996

Demi famously sported her buzzcut back in 1996 specifically for the beloved Ridley Scott film.

Tallulah showcased all of her best angles, in the pictures that have since amassed more than 20,000 likes on the platform.

The first shot had Tallulah facing the camera head-on, while she concealed her bare chest behind her tatted hands.

The second shot, edited in black-and-white, had her posed with her arms wrapped around her as she rested her chin on her shoulder.

The finale photo, shared to Rumer’s Instagram Story, featured the youngest child of Bruce and Demi showing off her chiseled jawline for the camera. 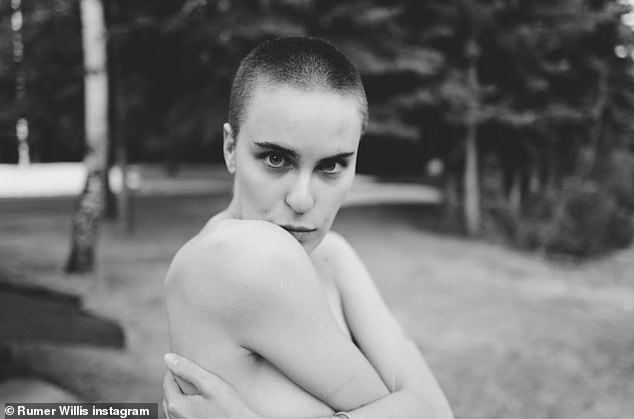 Artsy: The second shot, edited in black-and-white, had her posed with her arms wrapped around her as she rested her chin on her shoulder 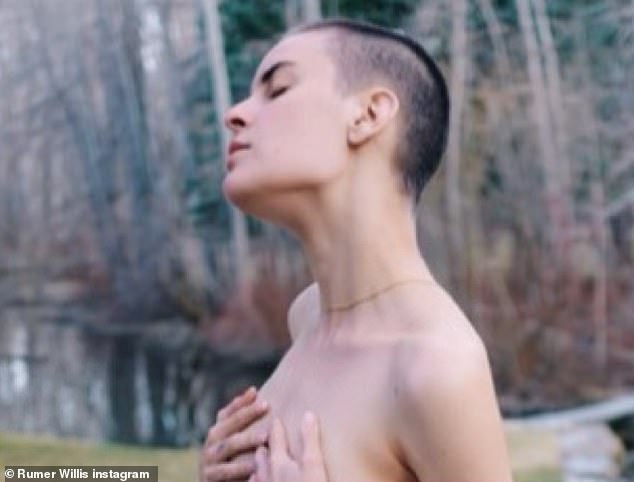 Grand finale: The finale photo, shared to Rumer’s Instagram Story, featured the youngest child of Bruce and Demi showing off her chiseled jawline for the camera

Fans of the famous family first got a preview of Tallulah’s edgy new ‘do, when Tallulah’s filmmaker boyfriend Dillon Buss recorded Rumer cleaning up the cut with a trimmer.

‘I get very serious while shaving heads’, Rumer shared as she reposted the clip on her own Instagram account.

Though Rumer may have done the detail work, it was dad Bruce who initially hacked away at Tallulah’s head.

While Bruce buzzed away, Rumer was heard telling her younger sibling, ‘Gorgeous, look at that. You look like Joan of Arc, dude!’ 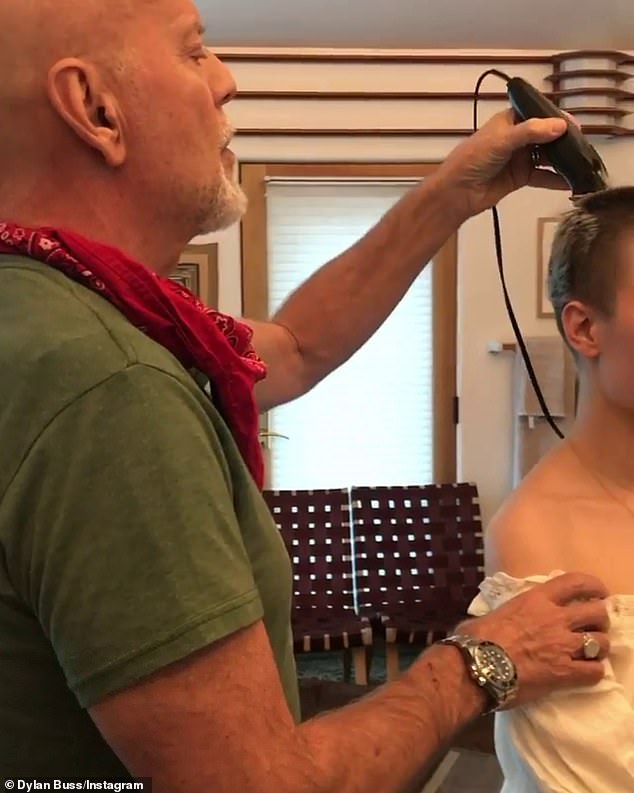 From hardman to hairdresser: Bruce Willis has been keeping himself busy during lockdown by shaving his daughter Tallulah’s head on Tuesday 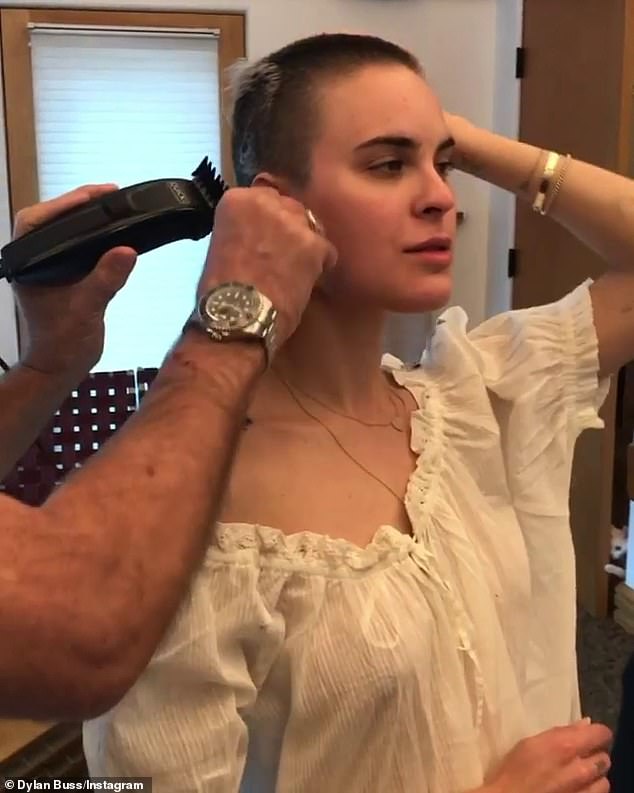 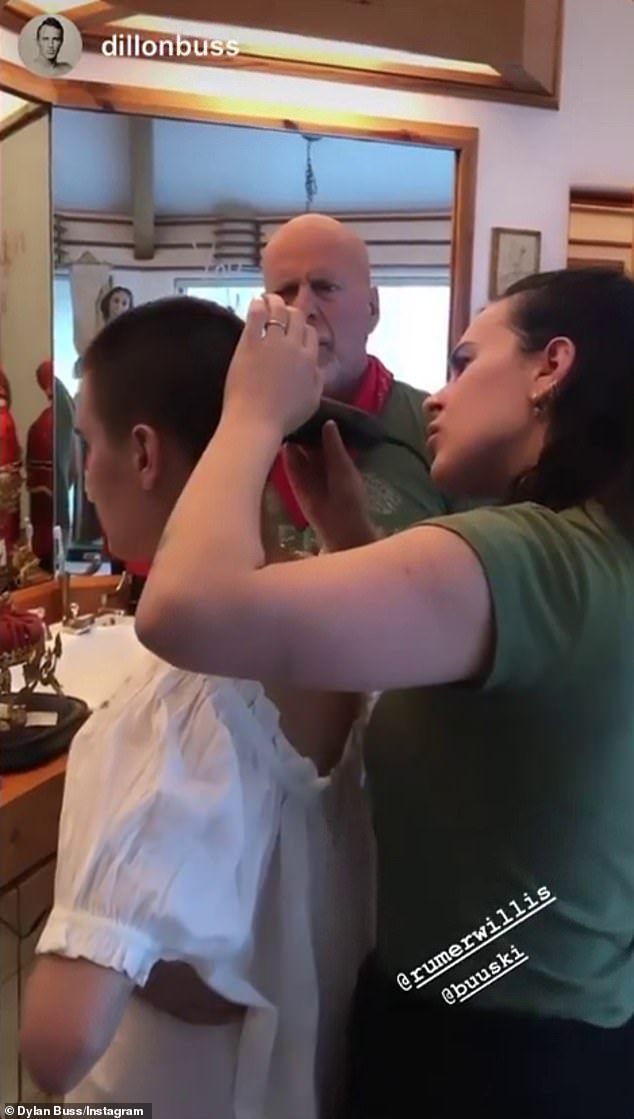 It seems the Willis clan have been getting along famously ever since surprising fans by appearing to reveal they were quarantined together.

In the two decades since their 13-year marriage ended, they have worked hard to build a happy friendship.

Also joining the exes are Scout, 28, and the girls’ respective partners. 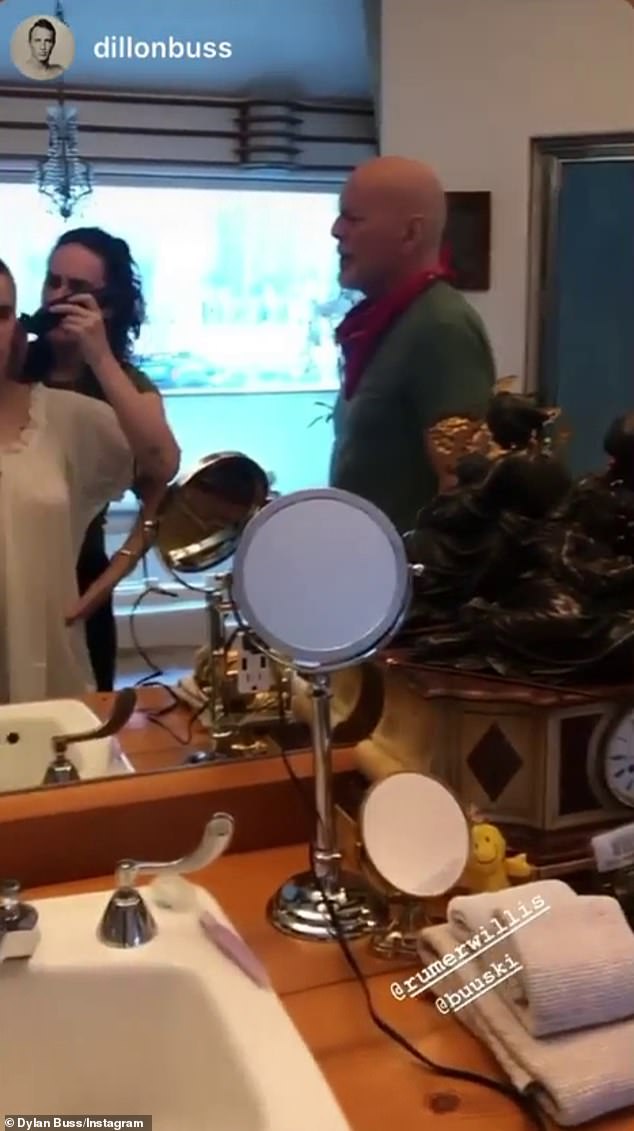 Impressed: Rumer is heard telling her younger sibling, ‘Gorgeous, look at that. You look like Joan of Arc, dude!’

Bruce’s wife Emma Heming and his youngest daughters – Mabel, eight, and Evelyn, five – are not in isolation with them.

Bruce and Demi posted a picture of themselves with their daughters on Monday, while wearing matching striped onesies.

It’s not known if Bruce is living with the family or visiting them, which begs the question of whether or not the family were adhering to social distancing measures. 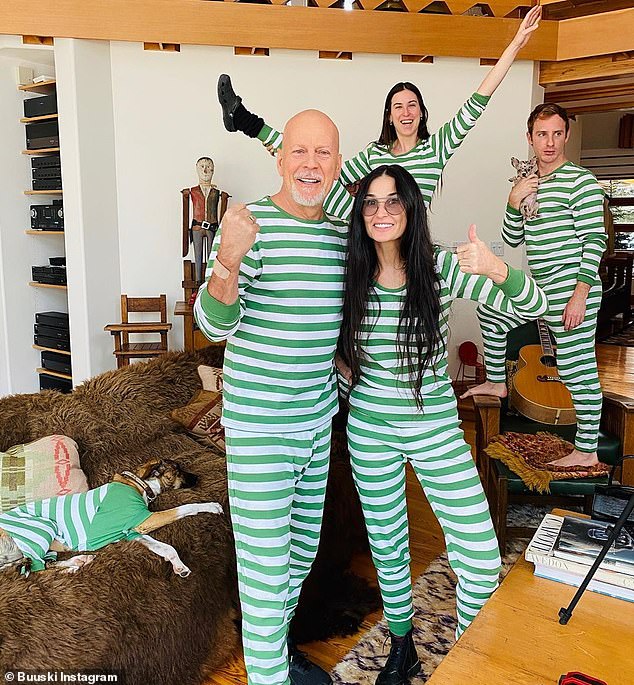 What about social distancing? Demi and Bruce wore matching pajamas to quarantine with their adult children and partners 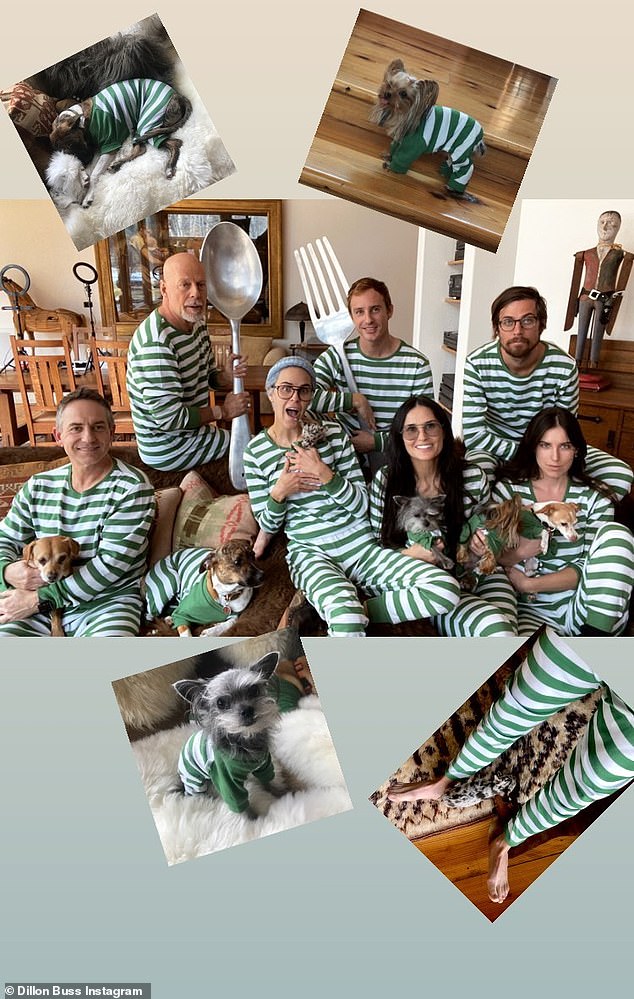 Get together: A second image posted to Dillon’s page shows the sisters, joined by Scout’s boyfriend Jake Miller, (far right) and Tallulah’s boyfriend Dillon Buss (centre) posing with a giant fork and spoon and their pooches

In a picture posted to the Instagram page of daughter Tallulah, Bruce and ex-wife Demi stand together, arms thrown around one another.

Scout stands behind them with a leg thrown into the air and grinning widely, while at her side is Tallulah’s boyfriend Dillon, holding pet dog cowboy. 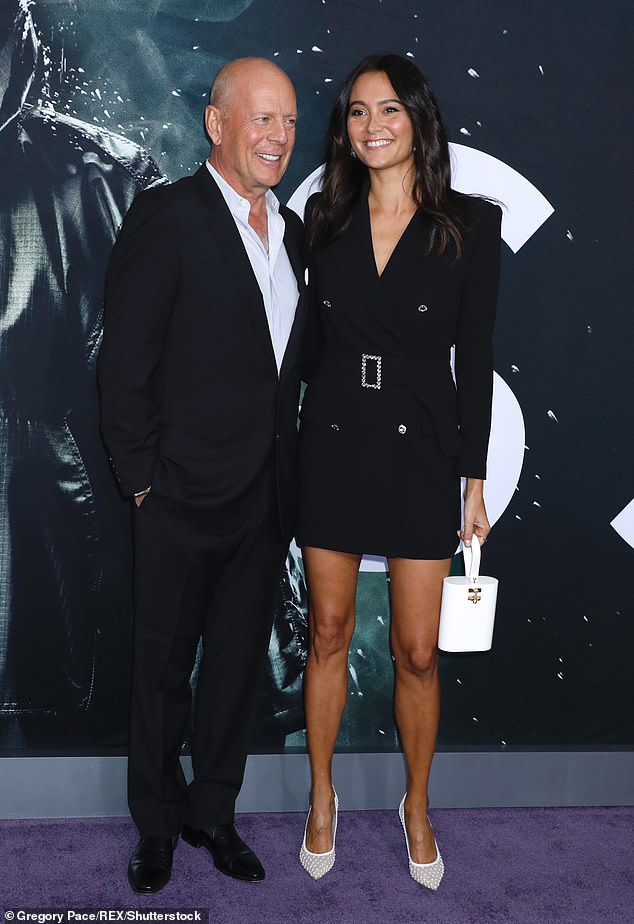 Happy couple: Bruce is seen with his wife Emma Heming in January 2019 at the premiere of Glass in New York – she has not yet been pictured at Demi’s house

While some people thought the picture was amazing, writing: ‘Family goals’ and ‘This is fabulous,’ others weren’t so sure.

Some followers questioned whether Bruce should be there at all, if he is in fact not living there full-time, in order to adhere to social distancing measures.

Bruce’s wife Emma was not pictured with them and wrote in the comments: ‘Not many can pull that color off! Lookin good squad.’ 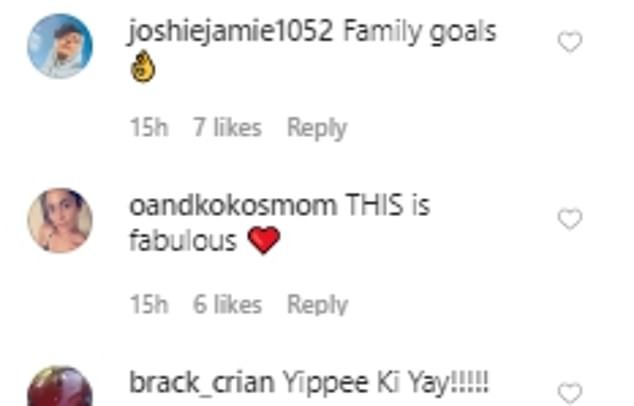 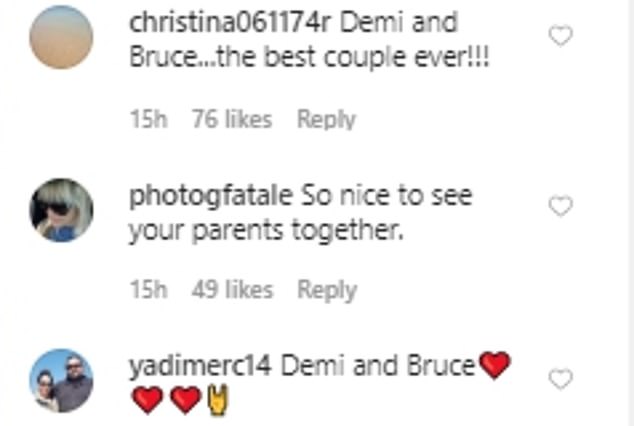 Into it: Some people, including Bruce’s wife Emma, loved the snap and thought it was ‘family goals’

A second image posted to Dillon’s page shows the sisters, joined by Scout’s boyfriend Jake Miller, posing with a giant fork and spoon.

A source confirmed to PEOPLE: ‘The two exes reunited during their self-isolation,’ however that still doesn’t clarify if Bruce is there full time.

Demi and Bruce were married from 1987 to 2000 and share three children, with oldest daughter Rumer, 31, not seen in the family pictures.

Following their break-up, both Bruce and Demi remarried.

Bruce was present Demi wed now ex-husband Ashton Kutcher in 2005, while last year Demi was on-hand at Willis’ vow renewal ceremony to wife Emma Heming, with whom he has two daughters.

The group regularly celebrate milestones as one big happy family, and Bruce and Emma even supported Demi at the launch of her memoir, Inside Out, last year. 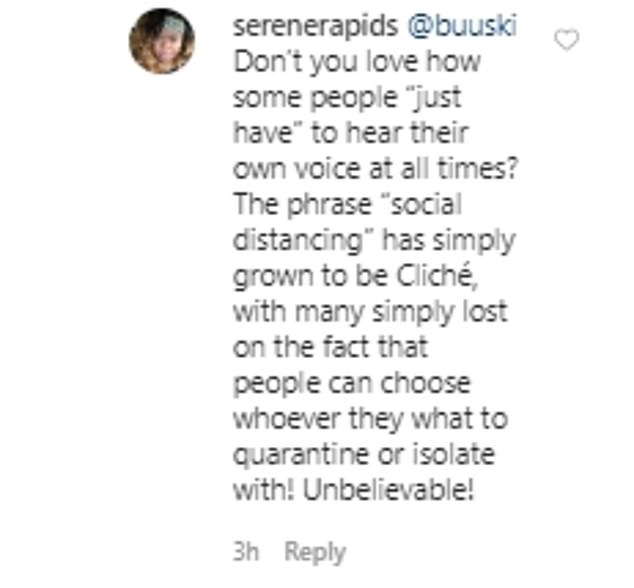 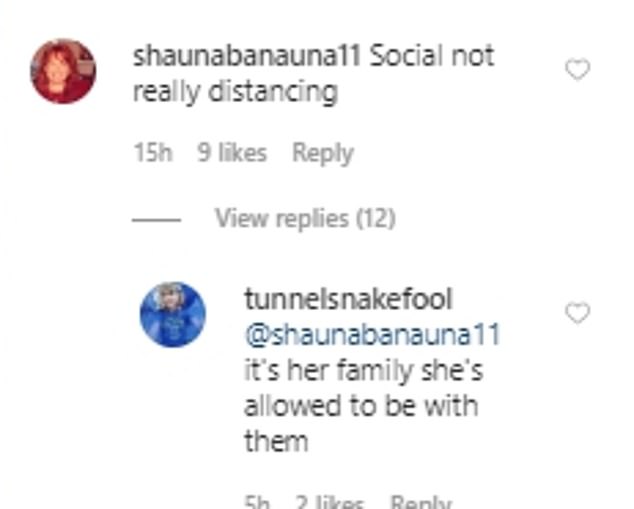 Bafta TV Awards: Chernobyl and The Crown among nominees

Holly Willoughby reveals some This Morning mistakes are due to dyslexia: ‘I don’t let it have power over me’