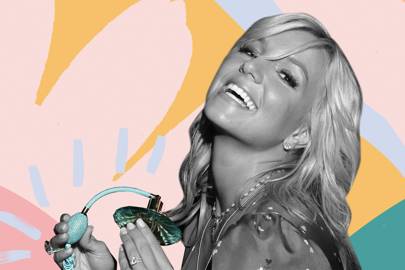 Cast your mind back to 2004. 52 million people tuned in to watch the final ever episode of Friends (*sob*), The X-Factor began, Mean Girls was released (yep, a whole 17 YEARS ago) and we spoke about it all on MSN Messenger. Britney Spears also released “Oops!… I did it again” – perhaps the most colossal of all her pop bangers – and forayed into the world of fragrance for the first time. A venture so successful that she went onto release a whopping 23 (!) Britney Spears perfumes – the debut scent being Curious and her most recent, 2019’s Prerogative Rave (“The new uninhibited fragrance for all”). In 2004, Britney was at the top of her game.

Before we venture further, let’s get one thing straight: Britney Spears was *not* a phase. Instead, an icon; the voice of a generation. The 39-year-old pop QUEEN lived in my head rent-free then, and she continues to do so today – aided in part by the tragic and inhumane conservatorship that triggered the #FreeBritney fan movement and this week’s UK release of the long-awaited New York Times Framing Britney Spears documentary. Britney Army 4eva.

While Toxic is absolutely my go-to karaoke hit, whatever the mood of the night, it’s Britney’s perfumes that undoubedtly take up the largest spot in my heart. Perhaps because Fantasy – in all its pink bejewelled glory – was the first fragrance I ever owned.

Forget your Chanel Coco Mademoiselle and your Le Labo Santal 33 for a hot minute. Britney’s perfumes are good. They’re nostalgic. They’re affordable. A quick spritz of Midnight Fantasy is like a trip down memory lane. Fantasy in Bloom was named Fragrance of the Year at the Hollywood Beauty Awards in 2018, and in March of the same year it was estimated that Britney makes $50m [£36m] from her fragrances every year. Impressive, right?

To celebrate my undying love for Britney Spears’ perfumes, I’ve ranked her most popular scents in order of deliciousness, from Midnight Fantasy to Curious and VIP Private Show. A Britney Spears perfume museum for your perusal, if you will. So go on, take a trip down memory lane and treat yourself to a spritz. We love ya, Brit.

We’re all to blame for what happened to Britney Spears