After losing the competition’s leading runscorer, Babar Azam, early on, Banton took centre stage and brought up his maiden T20 century with his fifth six.

Craig Overton then took three wickets in an over to help bowl out Kent.

The victory lifts Somerset, who began by losing three of their first four games, up to third in the South Group, two points behind Kent, who have now lost three of their past four matches after starting with five straight wins.

Kent had won 12 of the previous 16 T20 meetings between the sides and got off to the perfect start when Pakistan’s Babar, the number one T20 batsman in the world, was run out for just nine.

But Banton, who faced only 52 balls, dominated a stand of 42 with James Hildreth and again with Abell to set Somerset on course for their fourth total of more than 200 in their past five innings.

He brought up his century with a huge six over square leg off Daniel Bell-Drummond but was then caught at long-on off the next ball to give the Kent batsman his first T20 wicket.

But Overton (3-32) removed Bell-Drummond, Sam Billings and Mohammad Nabi in the space of five balls to put Somerset on top as Kent collapsed to 151 all out. 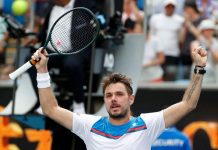 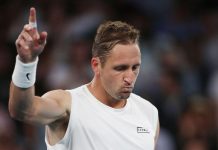 'Blessed' Sandgren hopes to keep dream alive with Federer up next