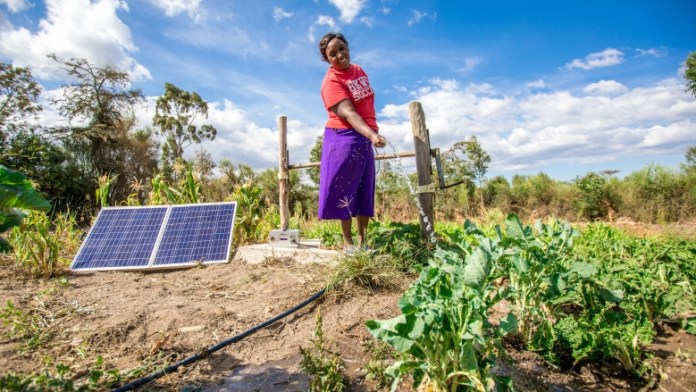 Electricity access is essential for people’s lives and livelihoods; from using fridges for storing food and medicine; charging mobile phones to stay connected; lighting up households and schools at night to powering local businesses.

Most people in many rural areas of Nigeria lack access to electricity and only few can afford costly diesel-powered generators that lead to pollution and noise endangering people’s life.

Solar-powered mini-grids could be the answer to rural communities’ access to electricity because it is well-suited to small, remote communities, renewable energy mini-grids can now be the cheaper, greener option.

Grid extension works by extending a national electricity grid to households and communities without access.

Extending the grid is cost-effective in connecting large, densely-populated communities who live close to the grid, but the cost of extension rises exponentially when the population density increases.

For those living in the most remote areas, standalone solar systems operating independently of the grid can meet electricity needs such as phone charging and lighting but may struggle with larger electricity loads such as powering machinery and agricultural equipment.

The Federal Government in order to address the lack of access to electricity is driving a robust solar system strategy that would help in delivering power supply to Nigerians especially the rural populace.

Others, he said, were 208KW in College of Health Technology, Mubi, 36KW in Michika Maternity Hospital and 36KW in PHC Ga’anda.

Mamman said: “As at today, at least more than 40 New Mini-Grid projects have been commissioned across the country providing reliable power supply to over 40,000 people in Off-Grid areas. These projects are mostly developed through public-private partnership, confirming the confidence in the private sector.

“The ministry will also provide five million households with solar home systems under the Nigeria Economic Sustainability Plan which is aimed at increasing electricity access and reducing the effect of the COVID-19 pandemic”.

The minister said the projects were conceived under a technical assistance grant initiative funded by the European Union (EU).

“The project is implemented by the Department for International Development (DFID) with oversight function provided by the Ministry of Power,” he said.

Mamman said that the projects were implemented under a framework which provided sustainable, reliable and affordable energy supply consistent with the nation’s commitment to achieving the United Nation’s Sustainable Development Goals (SDGs).

“We are grateful to the EU and their implementation partners who collaborated with us to develop these projects,” he said.

He added that providing reliable electricity supply would improve the lives of people through improved health care and education as well as job creation.

“Our being here today reflects a deliberate demonstration of the importance both the state and Federal Government attached to the provision of electricity in remote and underserved rural communities all over Nigeria by using distributed power generation with locally available resources such as solar.”

The project, which is one of the many solar mini projects to be inaugurated under the Nigeria Electrification Project (NEP), will provide clean, safe, affordable and reliable electricity for the community members.

The REA Managing Director, Ahmad Salihijo Ahmad, emphasised the Federal Government’s commitment to meeting its developmental goals by providing electricity access for all.

Reiterating REA’s role, he stated that “as an agency, we are responsible for powering unserved and underserved communities. Therefore, it is fulfilling every time homes, businesses, schools and medical centres are connected to sustainable solar power.

”Almost immediately, we are able to witness rural communities being transformed with clean energy through the jobs that are created during construction, to their micro and small businesses scaling to larger capacity, thanks to reliable electricity.”

The chief of Shimankar Community, Miskoom Danjuma Manu III, expressed gratitude to the Federal Government and the private sector developer for providing electricity to the community.

“Our businesses are now fully operational; especially at night. Our businesses are growing; we can buy and enjoy cold beverages in the provision shops. Today is indeed the beginning of better things to come for Shimankar.”

He also mentioned that the solar hybrid mini grid in Shimankar aimed to provide reliable electricity to 1,972 households, 273 commercial users, 5 productive users and 19 public users in the community to improve the socio-economic life of the community.

“It is a thing of pride that GVE, an indigenous Nigerian firm, can be a part of developing Nigeria’s rural areas. Thanks to this project, Nigerian solar developers, like myself, can access these investment opportunities and participate in growing Nigeria’s evolving off-grid sector.”

For mini-grids to be economically viable, Nigerians called on governments to integrate them into national electrification plans, set up a coherent enabling environment and learn from other countries to see what works.

With these various infrastructure put in place by the Federal Government, the rural areas through the solar mini-grids will be provided with cleaner, cheaper and more inclusive rural energy. (NAN Features)