A pall of sadness and uncertainty enveloped the camp of the All Progressives Congress (APC) in Bayelsa State, yesterday, as the Supreme Court sacked the governor-elect, David Lyon, and his running-mate, Biobarakuma Degi-Eremienyo, barely 24 hours to their inauguration as governor and deputy.

The confusion was in relation to the interpretation of the court ruling, which said the candidate that came second with the required constitutional requirement should be issued the certificate of return.

While supporters of the Peoples Democratic Party (PDP) insisted that their candidate, Senator Douye Diri, was governor-elect, APC supporters said he did not meet the constitutional requirement.

Also, the judgment has put the visit of President Muhammadu Buhari, who was billed to inaugurate the national headquarters of the Nigerian Content Development and Monitoring Board (NDCMB), on hold.

Buhari, who was expected to attend the inauguration of Lyon before inaugurating the edifice has reportedly cancelled the visit.

Members of the armed forces that have mobilised to the Samson Siasia Stadium venue of the inauguration of the NDCMB headquarters along OxBow Lake Road, were demobilised when it was clear the President would no longer attend.

In a unanimous judgment delivered by Justice Ejembi Eko, the court ordered the Independent National Electoral Commission (INEC) to issue a fresh certificate of return to the governorship candidate of the PDP, Senator Diri Duoye, who scored the highest number of votes and the constitutional required geographical spread.

Lyon was sacked for presenting a running-mate who supplied false information in his INEC Form CF-001.

The apex court agreed with the trial court that the case of forgery was established against the APC candidate’s running-mate, going by the multiplicity of names on his certificates.

Documentary evidence tendered before the court showed that the APC deputy governor-elect had multiple names in his various certificates.

READ  Money will be paid by NSFAS to students from today

The court held that there was no reasonable explanation as to why he should present or claim his name and personal identification and or documents of qualification in five different persons’ names being also different from his known or official names supplied by him without any evidence of change of names.

“The documents bearing such different names are on their faces and real value contain false information. The notary public before whom he made the deposition ought to know that he did not issue the certificates and was only helping to do that which is absolutely wrong in law.

“The said affidavit of correction and confirmation of name does not conform to the proper manner of changing or correcting a name.

The court further held that there was no nexus between the names on the certificates with the name of Biobarakuma. The suit was founded on section 31 (5) of the Electoral Act, 2010 (as amended), which the court held was predicated on documentary evidence.

The apex court agreed that, by section 31(6) of the Electoral Act, 2010, if the court determines that any information contained in the affidavit or any document is false, the court shall issue an order disqualifying the candidate from contesting the election.

The judge said  Degi-Eremienyo gave false information in relation to his educational qualifications and held that all his documents bore different names.

Shortly after the verdict, various groups of youth, women and PDP faithful poured into Government House, chanting victory songs. Cabinet members who were already seated in the Executive Council chambers went into jubilation as they put the session on hold.

Reacting yesterday, INEC spokesperson, Festus Okoye, said the commission would go back to its operations department and find out which political party came second in the polls as required by the courts.

“The Supreme Court has directed the commission to issue the Certificate of Return (CoR) to the political party that placed second in the Bayelsa governorship election and which also has the geographical spread in the election.

But the Chief Press Secretary to INEC, Rotimi Oyekanmi said INEC had not been served with the judgment details.

“No action can be taken until we are served,”  he said.

Nobody’ll be sworn in, judgment lacks fruit of justice – APC

However, the APC has threatened to explore every legal window to seek redress on the Supreme Court judgment, as it insisted that the opposition party candidate or any other party was not qualified to be sworn in.

Addressing a press conference at the party’s national headquarters in Abuja, the national chairman of the party, Adams Oshiomhole, said the judgment did not only lack the fruit of justice but also constituted grave danger to Nigeria’s democracy.

He insisted that, according to the judgment, which ruled that the next party with the highest number of votes should be issued a certificate of return, PDP did not meet the constitutional requirements.

Oshiomhole maintained that the next candidate, PDP, did not have one-quarter of the total lawful votes cast in the election in two-thirds of the eight local government areas.

“As a political party, we respect the rule, we respect and have confidence in the judiciary. However, this judgment lacks the fruits of justice. For me and our party, at the heart of election is the issue of who did the people actually vote for?

“Where justice and democracy thrive on the altar of technicalities, it constitutes danger to our democracy. Nobody has raised issues whether David Lyon and his running-mate won overwhelming majority.”

The PDP, in a statement by its spokesman, Kola Ologbondiyan, dismissed the comments of the APC chair as “inconsequential ranting” and cautioned him to steer clear of Bayelsa.

The opposition party admonished Oshiomhole “to be careful with his utterances and not use any forms of venomous garrulity and clear misuse of language to destabilise our nation and truncate our hard-earned democracy.”

“The people of Bayelsa know as a fact that the INEC, under our laws, cannot take instructions from any individual, let alone a factional national chairman of a dysfunctional political party like the APC,” he said.

While commending the Supreme Court for its courage and foresight in the discharge of its functions, the All Progressives Grand Alliance (APGA), in a statement by it national chairman, Dr. Victor Oye, urged the justices not to budge in the face of mounting criticisms by disgruntled and “egoistic” persons.

“We find it unfortunate and reprehensible that some intemperate members of the public should use uncouth and abusive language to address the learned jurists of the highest court in the land.

“It is also our stand that anybody dissatisfied with any judgement of the court should appeal to God or remain silent. We will never be a party to devious designs of some overzealous politicians to disparage and impugn the integrity of the justices of the Supreme Court for whatever reasons.”

Atiku said: “I congratulate Senator Douye Diri and his running-mate, Mr. Lawrence Ewhrujakpor. I also felicitate with the PDP. The Lords Justices have given us another opportunity to show Nigerians that power belongs to the people, and we must make good use of this opportunity,” he said.

Okowa described the ruling as a welcome development for the PDP, Diri and Ewhrudjakpor.

“We are happy because the Supreme Court has once again restored the confidence of the people in the judiciary. This victory is a clarion call on the party and the governor-elect to take steps to reconcile all aggrieved party members who defected or worked against the party in the November 16, 2019 governorship election in the state.

“This is very important, because there is need to rebuild the confidence of the people in our party, going forward,’’ the governor said.

But in the a Senior Advocate of Nigeria (SAN),  Ebun-Olu Adegboruwa said the different court’s verdicts on electoral matters constituted serious indictment of INEC and the political parties.

“The Constitution states clearly that sovereignty belongs to the people. The concept of election is to allow the people choose their leaders freely.

“We must avoid situations whereby leaders emerge through the courts, as that will be circumventing the will of the people.Let us allow the people to choose their leaders.

“These tribunal/court cases in Imo, Bayelsa, Zamfara, etc, constitute serious indictment of INEC and the political parties.  There is no legacy that the present administration has bestowed upon us as a nation in the area of electoral reforms, but rather things have gotten worse.”

Woman Confronts Husband’s Side Chic In A Supermarket (Video)

‘We are the cause of our own problem’ — Lagosians speak on scarcity of face masks, sanitisers 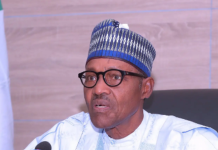 CAN asks Buhari to protect Christians from Boko Haram and bandits