Wigan Warriors had Zak Hardaker sent off as their 100% Super League start was ended by Catalans Dragons.

First-half tries from former Wigan players Michael McIlorum and Sam Tomkins were reward for their dominance of territory, possession and the ruck.

Arthur Mourgue was a livewire and capped his performance with a try to establish control after the break.

Hardaker was sent off late on for use of the head, leaning into England team-mate Sam Tomkins with the game well gone.

Fresh from humbling St Helens in last week’s encounter, Catalans Dragons showed just why they are among the title hopefuls in 2021 with a display of power, precision and rhythm that completely quelled the scoreless Warriors.

The visitors, who flew in and out in a day amid Covid-19 restrictions, were buzzed early on by a marauding McIlorum from close range and just could not get a foothold as the Dragons won the collisions and kept battering the defensive line.

Drinkwater had the ball on a string with the boot to create tries for Tomkins, and then for himself, while Mourgue’s try caught the Wigan defence off guard from a smart offload.

To add to Wigan’s woes, John Bateman received a painful and messy cut to the head, and they missed the sparkle normally offered by the absent Bevan French.

See also  Deontay Wilder explains why he turned down £100million to fight Anthony Joshua
Share on FacebookShare on TwitterShare on PinterestShare on Reddit
newscabalMay 29, 2021 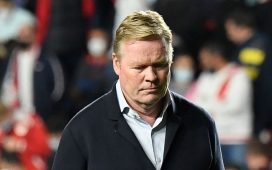