Leeds Rhinos put in a dominant display to stun Castleford Tigers with 11 tries as they coasted to a much-needed Super League victory.

Jordan Turner got Cas off the mark before Tom Briscoe began a breathtaking first-half spell from Leeds.

Jack Broadbent, Kruise Leeming, Richie Myler and Luke Briscoe sent them in at the break with a sizable 32-6 lead.

Castleford, who came into the game without full-back Niall Evalds, back-row Adam Milner and prop Lewis Bienek, made the perfect start when Turner crossed but things soon soured for the hosts.

Leeds made no changes for the trip to the Jungle after they slipped to ninth in the table following a fifth league defeat of the season in Sunday’s loss to Hull.

They looked reinvigorated despite conceding early as Briscoe’s opener for Leeds, his first of two tries on the night, set the tone for a comfortable performance as they ran in six tries without reply before the half-time hooter.

Despite their fine start to the season, Cas came into the game off the back of two consecutive defeats, and never looked like challenging a comeback after Leeds’ stunning first-half flurry.

Gannon’s try, just past the hour mark, came after the teenager did well to race on to Gale’s cross-field kick and also helped them cross the 50-point mark before the Leeds skipper’s late try of his own.

“It was tough to watch. I’m a proud man and I’ve always been a winner and that was so disappointing, it’s hard to put into words.

“It’s a terrible loss but it’s not the end of the world and one thing we have got is an opportunity next week [in the Challenge Cup semi-final] to put that straight.

“I know people are getting hot under collar and frustrated but they can’t be more frustrated than me. It’s massively disappointing that we get the fans back in and we haven’t performed.”

“We came back pretty ruthlessly. I was also pleased with our response to last week when we didn’t take our opportunities, we certainly fixed that up tonight.

“It was a tremendous exhibition of attacking rugby in the first half and we scored tries in a number of ways, that’s the pleasing thing.

“It will do us the world of good, to get that feeling of what our style of brand of rugby feels like. We’ve shown bits this year but not set after set like tonight.”

See also  5 talking points as Italy need penalties to see off Spain and make the final
Share on FacebookShare on TwitterShare on PinterestShare on Reddit
newscabalMay 28, 2021 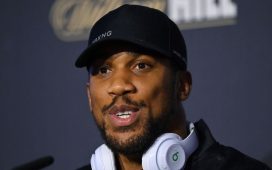