Sign up to myFT Daily Digest to be the first to know about Scottish independence news.

Scotland’s first minister Nicola Sturgeon on Tuesday claimed an “undeniable” mandate for another independence referendum as the parliament in Edinburgh approved the appointment of two Green party ministers to her government.

The move sealed a power-sharing deal between Sturgeon’s pro-independence Scottish National party and the Greens, and means her government is now assured of a parliamentary majority as it seeks a rerun of the 2014 referendum on leaving the UK, when Scots backed staying by 55 per cent to 45 per cent.

The SNP fell just short of a majority in the Edinburgh parliament after elections in May by winning 64 seats. But the pro-independence Scottish Greens, the SNP’s more leftwing rival, secured eight seats on a party manifesto that backed a second referendum.

“The mandate for that is undeniable — between us, the SNP and the Greens won 72 of the 129 seats in this parliament and each one of us was elected on a clear commitment to an independence referendum,” Sturgeon told the chamber at Holyrood in Edinburgh.

The UK government has so far waved aside SNP calls for another referendum, although Scotland secretary Alister Jack last week told Politico that one could be held if opinion polling consistently showed 60 per cent of Scots wanted it.

The appointment of Scottish Green co-leaders Patrick Harvie and Lorna Slater to Sturgeon’s government, which was approved in a parliamentary vote of 69 to 56, is the first time their party has had ministers in any UK administration.

Sturgeon said the power-sharing deal — under which the SNP and the Greens agreed to work together on climate change and other policies but still differ on issues such as the use of gross domestic product data as a core measure of economic success — was a “leap of faith” aimed at promoting more co-operative politics.

But the opposition Scottish Conservatives accused the SNP of introducing what they called the radical “anti-business” Greens to government in order to make up for its “failure” to win a majority in May.

“This is a nationalist coalition with one overriding goal: separating Scotland from the UK,” said Douglas Ross, Scottish Tory leader.

Senior Greens hope that with ministers taking a direct role in promotion of green skills, more energy-efficient buildings and travel and the creation of a national rent control scheme, the deal will show voters they can have an impact in government while retaining a distinct identity from the SNP.

But Anas Sarwar, leader of Scottish Labour, said the Greens could not pretend to be in government and opposition at the same time.

“I fear they will very quickly realise that the SNP’s rhetoric does not match reality,” he added. “And I think they will also come to realise that co-operation, to Nicola Sturgeon, means rolling over and doing what you are told.”

Ross Greer, a Green member of the Scottish parliament, said the appointment of Harvie and Slater as ministers was a historic moment.

“The need for radical transformation of our economic and social systems could not be clearer,” he added.

While their deal with the SNP will provide the Scottish Greens with ministerial jobs, it will have an immediate cost for the party.

Under a ruling by parliamentary presiding officer Alison Johnstone, Harvie and Slater will lose their rights to challenge Sturgeon at her weekly first minister’s questions session and will have their public funding cut. 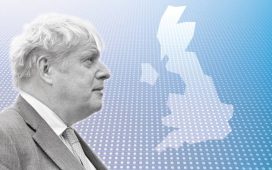