The Barcelona and Argentina star has “already been told of his win”, says the Daily Mail, even though the official ceremony is not until Monday 2 December.

According to Mundo Deportivo a team from France Football magazine, the Ballon d’Or organisers, travelled to Barcelona to tell the 32-year-old in person.

Messi and great rival Cristiano Ronaldo have both won the award five times and they are favourites along with Liverpool defender Virgil van Dijk.

England cricket captain Joe Root has dropped out of the top ten of the International Cricket Council’s Test batting rankings for the first time since August 2014.

The 28-year-old only scored two and 11 in the first Test defeat against New Zealand this week.

3. Williamson to apologise to Archer

New Zealand cricket captain Kane Williamson will apologise to Jofra Archer in person after the England bowler suffered racial abuse from a supporter during the first Test this week.

Williamson told stuff.co.nz: “It’s against everything that we as Kiwis are about. I certainly hope nothing like that ever happens again.

“I can only apologise on behalf of Kiwis to Jofra, not only from our team and how we look to conduct ourselves, but what we expect of Kiwis in general.”

4. The Hundred to start at The Oval

The first match of The Hundred men’s cricket tournament will see the Oval Invincibles face Welsh Fire at The Oval on Friday 17 July 2020. The 100-ball competition will continue through to the finals on Saturday 15 August.

The women’s Hundred starts on Wednesday 22 July with Birmingham Phoenix vs. Manchester Originals at Blackfinch New Road in Worcester. Women’s finals day will be on Friday 14 August.

Jones said: “Scott’s contract finished at the end of the Rugby World Cup and we had some discussions but he has decided to move on. Whatever role he takes on next I know he will do an outstanding job because he was fantastic for us. We will miss him but we wish him all the best and his family.”

The Guardian reports that UK Athletics (UKA) has “lurched into a fresh crisis” after chief executive Zara Hyde Peters lost her job before she had even begun.

She had failed to tell her local athletics club about her husband’s “inappropriate relationship” with a 15-year-old schoolgirl.

In the space of 10 months UKA has lost its chief executive, performance director and chair – and failed to hit its medal target at the recent world championships.

7. Is Zlatan on his way to Hammarby?

The Sun reports that Zlatan Ibrahimovic has appeared to confirm a transfer to Hammarby – but the Swedish club deny a deal has been done. He tweeted a video of a Hammarby shirt with his name on.

Ibrahimovic recently left MLS side LA Galaxy, who are owned by Philip Anschutz of the Anschutz Entertainment Group (AEG). AEG also has a 45% stake in Hammarby.

Zlatan to Tottenham? ‘No chance’ says Mourinho as Spurs have Kane

European heavyweights Paris Saint-Germain, Bayern Munich and Juventus are the first three teams to already qualify for the knockout stages.

Mercedes driver Lewis Hamilton has been nominated for the 2019 BBC Sports Personality of the Year (SPOTY) award.

SPOTY 2019 will be held on Sunday 15 December in Aberdeen and voting will be open to the public. The programme on BBC One will start at 7pm.

F1: Max Verstappen ‘not bothered’ by Mercedes and Ferrari speculation

Manchester City will not allow Mikel Arteta to leave the club this season, says head coach Pep Guardiola, as speculation increases that Arsenal have identified the Spaniard as their No.1 target to replace Unai Emery.

With Everton also interested in Arteta as an alternative to Marco Silva, Guardiola felt obliged to address his assistant’s situation on the eve of their Champions League group C clash with Shakhtar Donetsk tonight.

“I’d like him to stay with us as much as possible,” said Guardiola. “Manchester City has an incredible, valuable person to work in this club for the future, but personal life is personal life and professional desire is for professionals and everyone, not just me.” 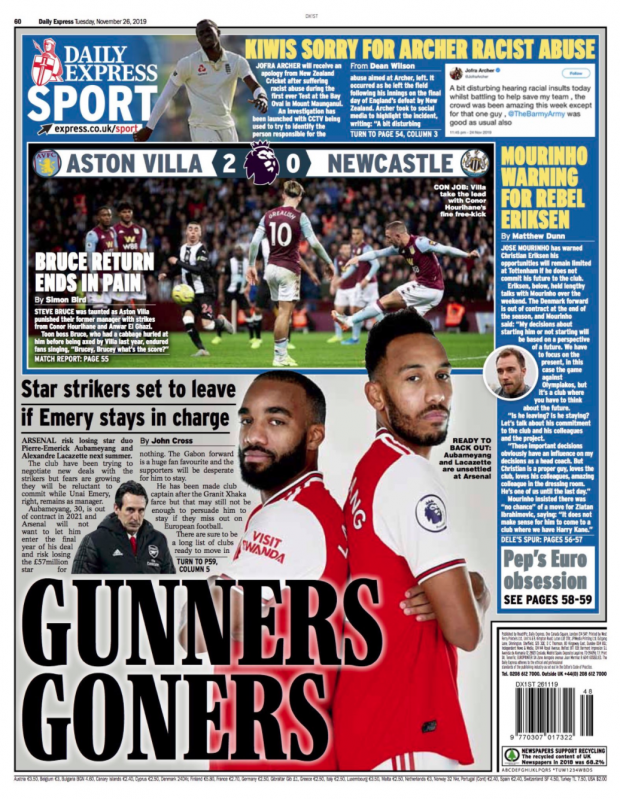