BEFORE INDIA’S women footballers board the plane from Kochi to Mumbai on Thursday, each player will be handed a dossier of sorts. From basic Covid-appropriate behaviour to avoiding shops and cafes at the airport, the document will spell out all the dos and don’ts for their trip.

And the moment they land in Mumbai, the 23-member squad and the coaching staff will be separated from other passengers and whisked away to a dedicated testing area at the Arrivals terminal through special lanes. Only after they test negative will the players board a bus for their hour-long journey to Navi Mumbai, where they will stay in a bio-secure environment for the next fortnight.

Mumbai had been reporting the highest number of cases for any city in the country till a few days ago, but there are clear signs now of the surge stabilising. On Tuesday, the city reported only 11,647 new cases, almost half of what it was reporting a few days ago.

But Maharashtra is not taking any chances. The state government is going all out to ensure that the Asian Cup, which kicks off on January 20, is not derailed by the third wave. The 12-nation tournament, which is also a qualifier for the 2023 Women’s World Cup, will be played behind closed doors in Pune, Navi Mumbai and Mumbai.

According to Aaditya Thackeray, state minister and president of the Mumbai District Football Association, the players and officials “will be in bio-bubbles and have testing protocols set for their own safety”. 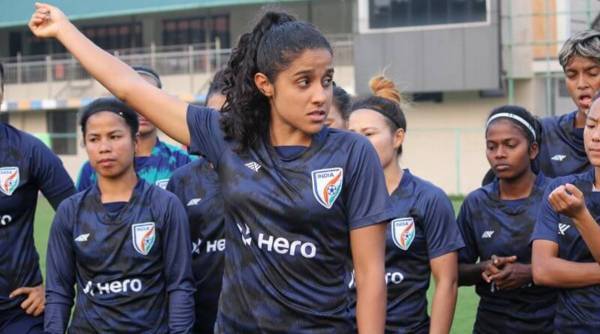 Only after they test negative will the players board a bus for their hour-long journey to Navi Mumbai, where they will stay in a bio-secure environment for the next fortnight.

“The most stringent Covid-appropriate behaviour protocols have been put in place to ensure that all the teams, officials and support staff are safe inside the bubble, and also for the safety of our citizens,” Thackeray told The Indian Express. “We are sure that the tournament will be a huge success, albeit at the moment without spectators and fans.”

India’s sporting calendar has already been hit by the latest Covid surge.

On Monday, the cricket board was forced to postpone the knockout matches of the U-19 Cooch Behar Trophy in Pune. Earlier, the All India Football Federation had to suspend the I-League, the country’s second-tier football championship that was being held in Kolkata.

Covid cases have also been reported in the ongoing Indian Super League in Goa while the India Open badminton championship, which got underway in New Delhi on Tuesday, saw some top players withdrawing at the last moment after testing positive.

But Asian Cup organisers are confident about the processes in place.

The 276 footballers, and hundreds of coaches, match officials and organisers, will have dedicated, fast-tracked immigration lanes at the Mumbai airport, frequent RT-PCR tests and be completely separated from the local population for the duration of the tournament, which ends on February 6.

“However, the Central and state governments gave an exemption since the tournament is being held in a bio-bubble, where everyone will practically be in a quarantine-like situation. That assurance was very comforting,” an official said.

The official also said elaborate procedures have been put in place to minimise the visiting teams’ interaction with the local population, right from the moment they land. Three countries — Australia, China and Iran — will be taking chartered flights to Mumbai while the rest will take commercial planes via Doha or Dubai.

“At the airport, even before they go for immigration, we have set up a dedicated testing facility for the visiting teams and officials. Once they clear that, they will be escorted by the organising committee staff to dedicated immigration counters and there’ll be a separate lane for them to exit the terminal,” the official said.

The teams are being put up in seven hotels across Navi Mumbai and Pune, which will be exclusively for their use. The hotel staff, drivers, chefs and other attendants will also be a part of the bio-bubble. The teams and officials will be allowed to travel only between the hotel and the venue, and will be tested every 72 hours.

On January 20, the tournament will begin with a match between China and Chinese Taipei at the Mumbai Football Arena. Coached by Sweden’s Thomas Dennerby, India will open their campaign against Iran later that day at the DY Patil Stadium.