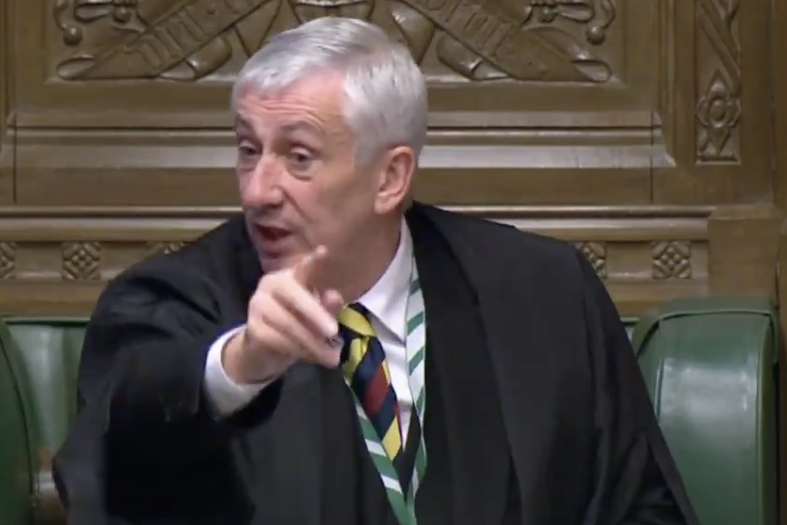 Speaker Sir Lindsay Hoyle today launched an excoriating attack on Boris Johnson’s “contempt” for Parliament, giving MPs the green light for open rebellion against the Prime Minister’s “disregard for the House” during the coronavirus crisis.

In a wounding rebuke from the chair, the Speaker said the Government’s “excuses” for ignoring the Commons were “unconvincing”.

“The way in which the Government has exercised its power to make secondary legislation during this crisis has been totally unsatisfactory,” said the Speaker.

“All too often important statutory instruments have been published a matter of hours before they come into force and some explanations as to why important measures have come into effect before they can be laid before this house has been unconvincing and shows a total disregard for the House.”

He demanded: “I am looking to the Government to remedy a situation I regard as completely unsatisfactory.

“I am now looking to the Government to rebuild the trust with this House and not treat it with the contempt that it has shown.”

His highly-critical statement was timed just before the start of Prime Minister’s Questions, meaning Mr Johnson was in the chamber to hear it as he prepared for the weekly clash with Sir Keir Starmer.

It also coincided with the chairman of the 1922 Committee, Sir Graham Brady, using an interview with the Standard to demand that Mr Johnson adopt “a new modus operandi” in place of imposing new covid laws by decree without debates or votes.

Backbenchers from all sides of the Commons appeared to be uniting to hold the Government to account. Some 80 MPs signed the proposed Brady amendment designed to force more votes, including senior Tories, Labour, Lib Dem and DUP MPs.

As expected, the Speaker did not call a vote on the Brady amendment. But he gave the green light to MPs on all sides to assert their right to drag ministers regularly to the Commons to be quizzed.

Is this the man Boris Johnson should fear the most?


Sir Lindsay explained that he could not select any amendments to today’s motion seeking an extension to the use of special powers. To do so risked “undermining the rule of law”, he explained. This is because the wording of a Government motion is set down in the Act itself. Sir Lindsay said any amendment might cause “uncertainty” or lead to legal challenges.

He told MPs: “When I became Speaker I made it clear that I would take decisions on matters relating to procedures guided by professional advice.

“I have concluded on the basis of advice that I received that any amendment to the motion before the House risks giving rise to uncertainty about the decision the House has taken.

“This then risks decisions that are rightly the responsivity of Parliament ultimately being determined by the courts.”

He added: “Lack of clarity in such important matters risks undermining the rule of law. I have therefore decided not to select any of the amendments to the motion.

“As I hope my early comments show I have not taken this decision lightly.”