Astonishing images released by detectives today showed them entering the bunker 13ft below the earth’s surface and rescuing six Eastern Europeans working and sleeping in the hideaway where 3,500 counterfeit cigarettes an hour were being produced.

One of the suspected ringleaders was a British fugitive who failed to return to his UK prison cell after a temporary release.

The factory workers, whose bunker was hidden under a shipping container inside stables near the Costa del Sol, were allegedly ‘left to die’ by their bosses before they were discovered.

Detectives have revealed the mens’ supply of oxygen was cut off when the diesel-powered generator they depended on for clean air stopped working after the police raid – and the first of the 20 detainees held above ground kept silent about the soundproofed underground hideaway.

Police discovered the bunker by using a forklift truck to move the shipping container and climb down a ladder after the workers made a desperate attempt to escape as their air supply ran out, but were not heard shouting for help.

The factory is located in Monda, Malaga, just a short drive from Marbella. 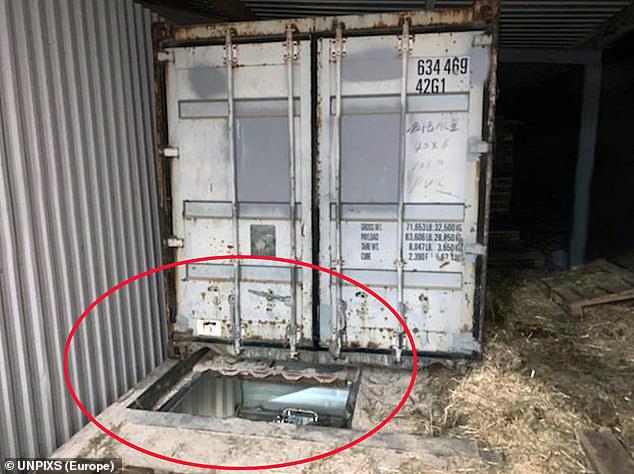 The Ukrainian factory workers had been working in a bunker beneath a shipping container in Monda, Malaga, a short drive from Marbella 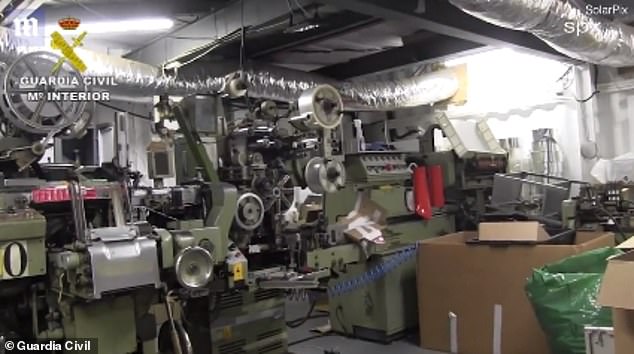 Inside the bunker Spanish police found a large machine for making cigarettes (pictured) alongside a kitchen, bathroom and bedroom for those living there

The number of Brits arrested has not yet been made public, although police say the criminal gang behind the illegal cigarette factory was ‘formed mainly by British nationals’.

A Civil Guard spokesman, identifying the British fugitive only by his initials of D.D, said: ‘One of the alleged ringleaders, a British national whose initials are D.D and is aged 30, was on the run from British police having failed to return to prison following a temporary release.’

The images released by investigators who smashed the British-led operation showed the high-tech factory where the Cartel-branded cigarettes were being produced, as well as the underground bunk beds where the men slept and the kitchen where they made their meals.

The operation, led by a specialist unit of the Civil Guard called the Central Operative Unit which is responsible for the investigation and prosecution of the most serious forms of crime and organised crime, was dubbed Operation Hannibal.

Spanish police said they had been supported by British officers. Cannabis resin and marihuana were also seized in the raids. 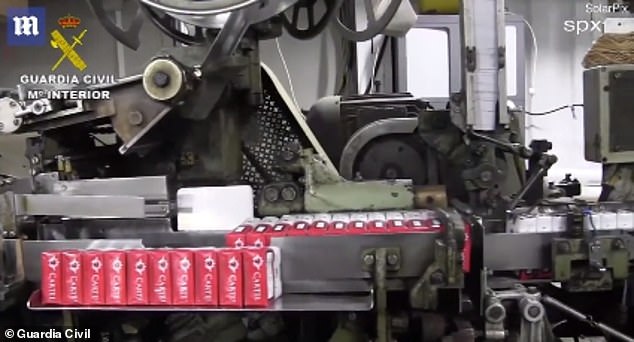 The machine created and packaged up cigarettes which are thought to have been destined for the UK market. A British gang is also said to have been running the operation 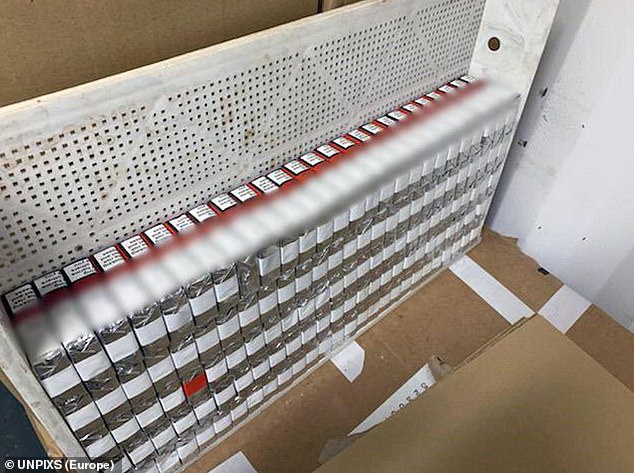 They were producing cigarettes for sale on the black market. The operation was uncovered by the Civil Guard with support from British police 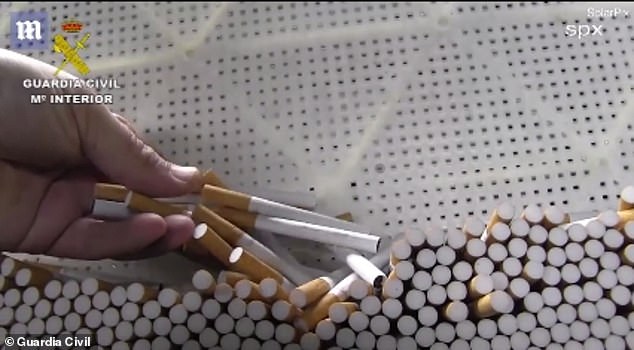 A spokesman for the Civil Guard confirmed: ‘A criminal organisation composed of British, Lithuanian and Ukrainian nationals, which made and commercialised black market cigarettes and was involved in drugs smuggling, has been smashed.

‘Twenty people have been arrested and 13 searches have been carried out at residential properties and warehouses.

‘The operation has led to the seizure of 153,000 packets of cigarettes which were ready to be sold, 17,600 kilos of tobacco, 20 kilograms of cannabis resin and 144 kilograms of marihuana.

The force added in a statement: ‘The factory was hidden away in stables under a shipping container that was moved using a forklift truck.

‘It wasn’t until the night of the day the police operation began that the hideaway, which was around 13ft underground, was discovered.

‘Six Ukrainian workers who lived together in unsanitary conditions and who had virtually no contact with the outside world, had been locked in and abandoned.

‘The other members of the organisation had said nothing to the Civil Guard about these workers when the police operation began.

‘A diesel generator which enabled the workers to stay underground but needed to be refuelled daily, stopped working the day of the police operation and made conditions inside the underground factory dangerous for those inside.

‘They realised there was a problem and air was in short supply and started shouting and banging on the shipping container over their hideaway.

‘But the police who were above ground didn’t hear their cries for help because the underground installations had been soundproofed so the machinery couldn’t be heard.’ 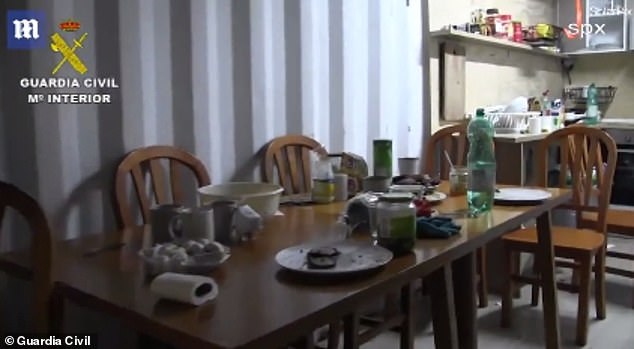 Six Ukrainians were found inside when Spanish Police entered. Above is their kitchen 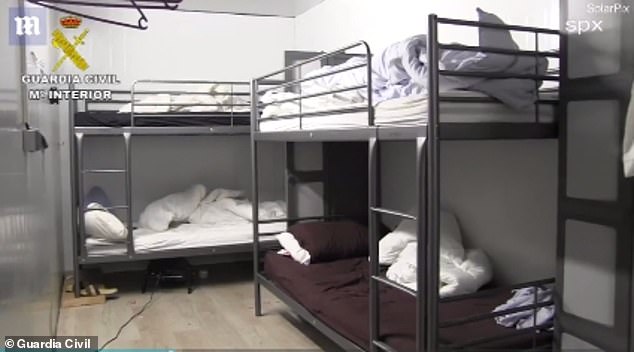 This is the bedroom the men used, where they slept on bunk-beds. They are thought not to have left the bunker at all while working 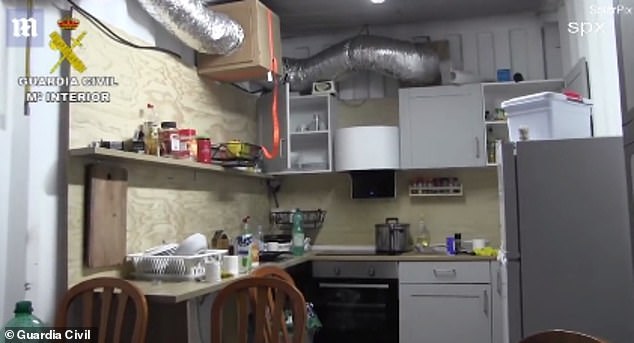 The Civil Guard spokesman revealed: ‘The underground factory was only discovered thanks to the insistence of officers, who rescued the men inside.

‘Although the members of the criminal organisation who had been arrested earlier in the day knew there were six workers inside and were aware of the difficulties involved in locating it, they didn’t inform police about its existence at any point.

‘This situation was worsened by the fact the workers could have died because the generator had stopped working due to a lack of fuel.

‘The lack of oxygen would have lead to considerable loss of life if police hadn’t discovered the factory in time.’

Twelve of the 20 people arrested have already appeared before a judge in a closed court hearing pending an ongoing judicial probe.

The court that ordered the prison remands is based in Coin, a half-hour drive inland from the Costa del Sol resort of Marbella.

Carlos Gallego, head of the UCO’s Financial Crimes Unit which led the operation, said police had been investigating the gang since June thanks following cooperation from Europol’s AP Smoke.

He said the cigarettes that were being produced were going to go on sale on the black market in the UK and posed risks to consumers’ health because they were not subject to proper controls. 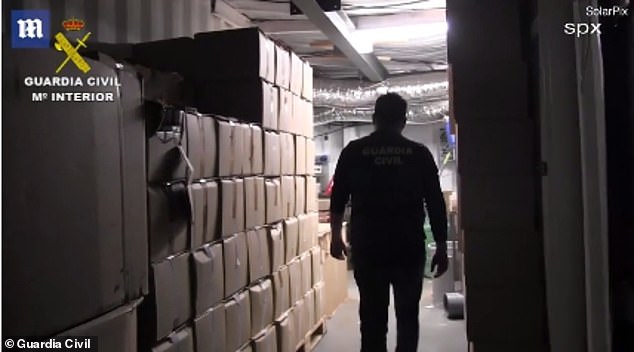 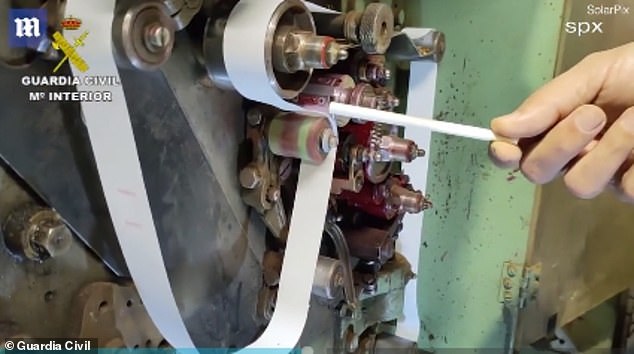 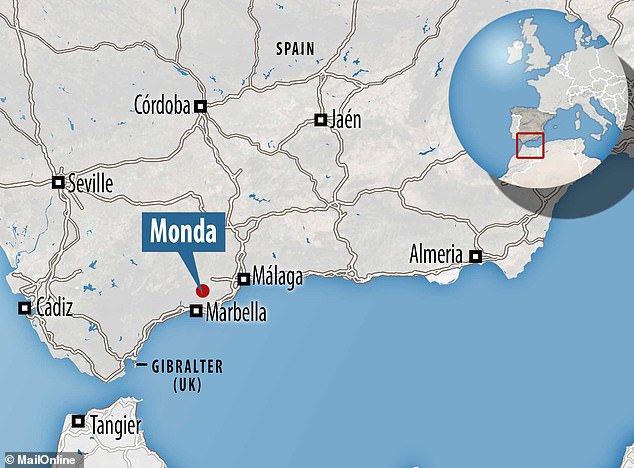 The hideaway was uncovered in Monda, Malaga, near the tourist hotspot of Marbella

A Civil Guard spokesman said the 12 suspects remanded in prison after appearing before an investigating judge were all British nationals.

Speaking at the scene Mr Gallego said: ‘The site chosen was the perfect place for the organisation to set up their clandestine factory. It’s a complex place and you cannot begin to imagine the difficulties we had locating it and establishing exactly what type of criminal activity was going on here.

‘The stables were the illegal cover for the illegal activity and impeded the discovery of the factory.

‘What’s important to point out here is that this is the first subterranean illegal cigarette factory that has been discovered in Europe.

‘Experts had pointed to the existence of these types of factories but as you can imagine they are not easy to find.’

He revealed the police raids began on February 11 at 5am but said the undiscovered factory was not discovered until 11pm that night and the six trapped workers were freed.

The workers knew how to operate the machinery because they had previously worked in legal tobacco factories in their home countries. Police say they had been underground for a week and were due to stay for a month in total before being replaced with others. 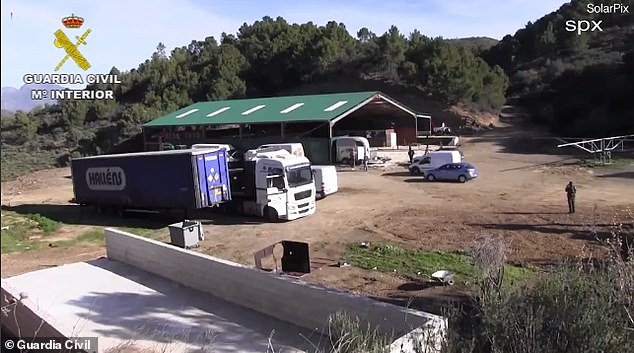 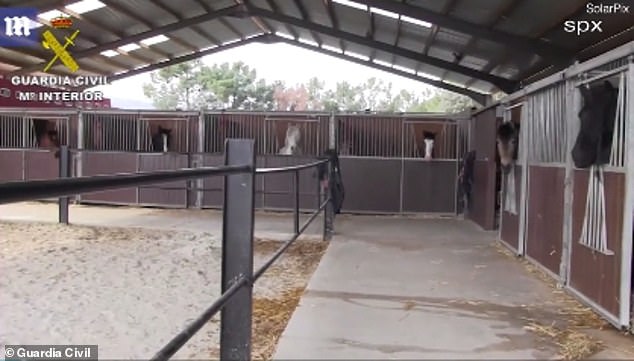 Horses pictured inside the stables positioned above the cigarette-manufacturing bunker

A secrecy order placed over the case following the arrests has now been lifted, enabling police to go public with details of the operation.

Thanking the UK authorities for their assistance, he added: ‘The cigarettes we seized that were ready for sale were of a brand that is very well-known in the UK.

‘That was where they were going to be sold in.’

Europol said the suspected ringleaders, who Spanish police have confirmed are British, kept workers in ‘extremely dangerous and toxic conditions’.

A spokesman said: ‘The operation uncovered a full range of production facilities operated by the criminal group.

‘Law enforcement authorities raided the primary production facility where the raw tobacco was cut and prepared for the second production phase.

‘In the facility, believed to have been operating since 2019, workers made and packed the counterfeit cigarettes; a complete production line under one roof. 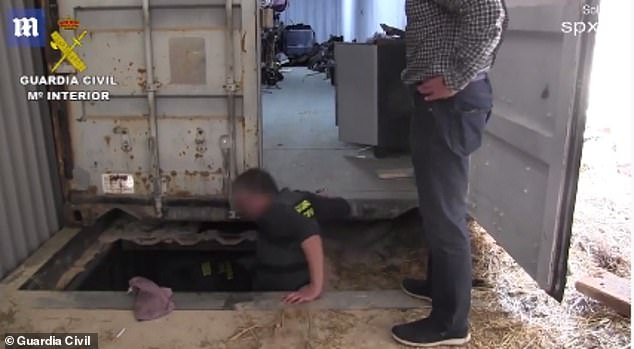 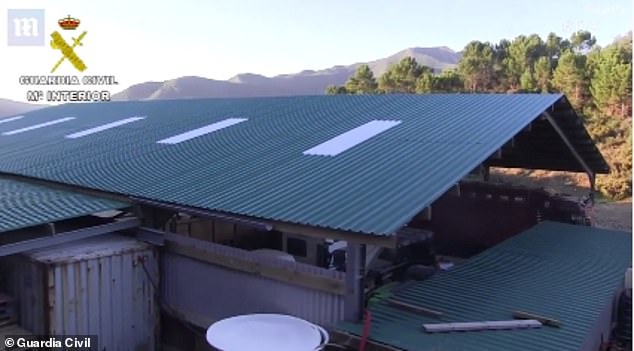 The bunker where the men were hiding was underneath this barn in Monda, near Marbella

‘Beds and living quarters for the workers were also found underground. This is the first underground factory to be discovered in the EU.

‘Workers there were forced to work in extremely dangerous and toxic conditions. Locked up four metres underground, they were not allowed to leave the facility on their own, and no emergency security was in place.

‘Similar cases uncovered that criminals blindfold the workers when taking them to and from the factory.

‘Although paid for their work in the facility, workers are usually not allowed to leave or make contact with others while working.

‘Criminals often even seal the premises to enforce this. These illegal activities are estimated to bring in about 625,000 euros (£525,000) per week in criminal profits.’

Swedish PM warns of ‘thousands of deaths’ after refusing to lock down despite pleas by 2,300 doctors

Spencon: Inside the collapse of an African construction giant