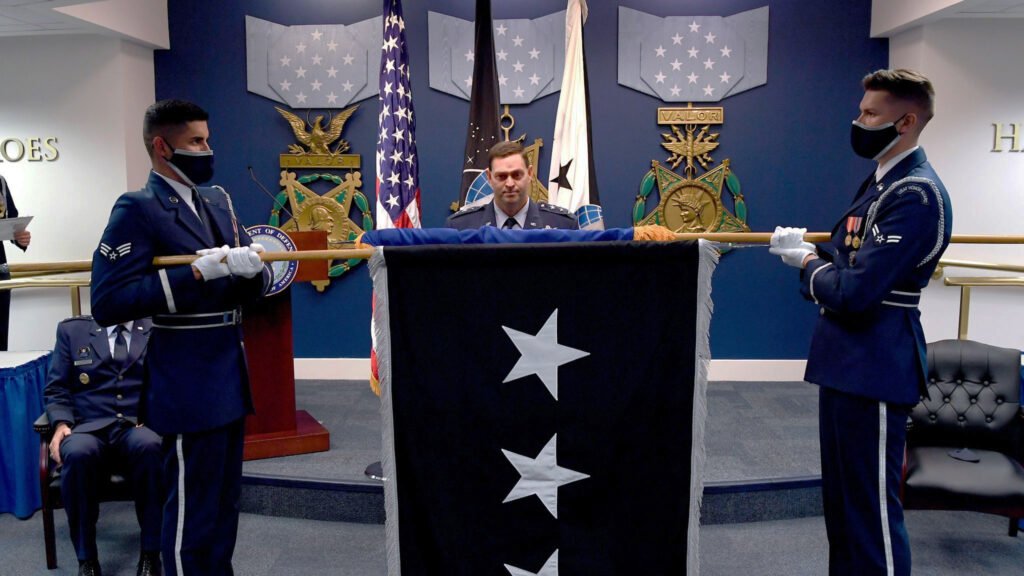 Maj. Gen. B. Chance Saltzman was the first U.S. Air Force general officer transferred and promoted to lieutenant general in the U.S. Space Force during a ceremony at the Pentagon Aug. 14. (Secretary of the Air Force Public Affairs)

WASHINGTON: Air Force Secretary Frank Kendall recently signed off on creation of four new Space Force components, with units now being set up to work within combatant commands in Europe, the Pacific, the Middle East, and South Korea, according to a top Space Force officer.

Saltzman explained that establishing the new Space Force components is a two-step process. Kendall’s signature on what are known as “organizational change requests” for Space Force components to European Command, Indo-Pacific Command, Central Command, and US Forces in Korea is the first step. It allows the Space Force to establish an administrative chain for Guardians assigned to those forward theaters that runs up through Chief of Space Operations Gen. Jay Raymond.

At the moment, Space Force only has one established service component — Space Operations Command (SpOC), which is assigned to Space Command (SPACECOM). Thus, Guardians who are not serving in joint force billets in the other combatant commands are instead administratively assigned to the Air Force components there, he said.

“So, what we’re establishing is a Space Force element, which is a service component, in each of those commands to have an organizational structure that Guardians can lean on for administrative support, etc.,” Saltzman said.

Step two, Saltzman said, is “done through the Chairman and the Joint Staff, which assigns that unit as the component to the combatant commands. And of course, it’s done in concert with the combatant commands themselves.” When those assignments are made formal, those components then will “have a responsibility for warfighting as well as that administrative control,” he added. “Now, a lot of that will be security cooperation, integrated planning into exercises, you know, planning for what happens when we have to go to war or execute an O-plan.”

The “more important question,” Saltzman noted, is how the Guardians in those Space Force components will work with SPACECOM, which has “the global responsibility” for space as a theater of operations (in military jargon, an area of responsibility, or AOR).

Sorting that out continues to be an issue of considerable debate, as Breaking Defense first reported, especially as SPACECOM itself reorganizes to streamline its own command chain.

Indeed, in mid-November SPACECOM held the first-ever summit of its Joint Integrated Space Team (JIST), comprised of military and civilian personnel from across the services who represent SPACECOM at the 10 other combatant commands, according to a Nov. 22 press release. Originally called Space-Integrated Planning Elements, the release explained, “JIST members are integrated into their host combatant commands to show their staffs and leaders how USSPACECOM can support their operations and how they can be supported.”

On the other hand, “the operational, detailed planning of how those mobility assets are integrated into the operations plans is done at the component level,” Saltzman continued.

So, for space, ensuring that relationship between command staffs is the role of SPACECOM via the JISTs, he said. The Space Force component, however, would have the responsibility for the “detailed operational integration to make sure that the [different] kinds of operations are synchronized and synergistic across all the components.”