One of the more striking constellations of the southern hemisphere’s sky, the Southern Cross, can claim a new accolade – its bright blue giant Beta Crucis star has been revealed as a heavy-weight champion.

An international team of scientists have discovered that Beta Crucis, also known as Mimosa, is 14.5 times heavier than Earth’s sun and is just 11m years old, making it the heaviest star to have its age determined by astroseismology.

To put that in perspective, Earth’s sun is thought to be roughly 4.5bn years old and the mass of more than 330,000 Earths.

The Southern Cross has long been used for navigation due to its visibility throughout the year in southern skies and is a significant symbol of nationhood for many countries, featuring on the flags of New Zealand, Australia, Papua New Guinea, Samoa and Brazil. It is known by at least eight different names in Māori and its symbolism is subject to multiple interpretations, including an anchor, a sky canoe and a hole through which storm winds escape.

The team of scientists, led by Dr Daniel Cotton from the Australian National University and Monterey Institute for Research in Astronomy in the US, cracked the star’s age and mass by combining asteroseismology, the study of a star’s regular movements, with polarimetry, the measurement of the orientation of light waves.

“I wanted to investigate an old idea,” Cotton said.

“It was predicted in 1979 that polarimetry had the potential to measure the interiors of massive stars, but it’s not been possible until now.”

Asteroseismology relies on seismic waves bouncing around the interior of a star and producing measurable changes in its light. Probing the interiors of heavy stars that will later explode as supernovae has traditionally been difficult.

The study relied on three different types of measurements of its light. The first is using space-based measurements of light intensity from two of Nasa’s satellites, Tess and Wire. The second uses 13 years of ground-based high-resolution spectroscopy, which is the study of the absorption and emission of light and other radiation by matter, from the European Southern Observatory.

Prof Conny Aerts of KU Leuven in Belgium said: “While these stars are the most productive chemical factories of our galaxy, they are so far the least analysed asteroseismically, given the degree of difficulty of such studies. The heroic efforts by the Australian polarimetrists are to be admired.”

“This polarimetric study of Mimosa opens a new avenue for asteroseismology of bright massive stars.”

The authors said the findings, published in Nature Astronomy, will provide new detail on how stars live and die, and how they affect the Galaxy’s chemical evolution.

‘We started eating them’: what do you do with an invasive army of crayfish clones? 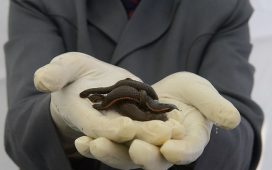