On a morning of cloud cover so heavy that the Headingley floodlights were switched on, and 2,056 souls planted their behinds around the ground for the first time for a men’s county game since 2019, Yorkshire chose to bowl.

With Sussex 68 for four just after lunch, it seemed a good decision. By stumps, less so, thanks to a smashing unbeaten 126 from Ben Brown, 40 from Aaron Thomason and a cameo of 37 from 16-year-old Danial Ibrahim.

Brown played with nimble feet and hands, running swiftly between the wickets and driving with panache, picking the gaps ably, like a pick-happy man with an orange pith obsession. Ibrahim was sighingly calm, straight drive here, flick there, making the most of late-afternoon Yorkshire bowling with the new ball that touched on the wayward.

Northamptonshire, the gluttons, bolted down four batting points before the close in a riotous day’s batting against Kent. Ricardo Vasconcelos and Emilio Gay put on 135 for the first wicket, before Gay, who made his maiden first-class century, and Luke Procter added 100 for the second. Darren Stevens, aged 45, picked up a couple of wickets with the second new ball to lead a mini-revival at the close.

There were two catches for Kent’s wicketkeeper Ollie Robinson, who received an apology from Kent Online, who had mistakenly pictured him in Wednesday’s story about the other Ollie Robinson.

Lancashire were squirrelled out by Glamorgan for 173 after a succession of batsmen got in, but then got out again, without adding greatly to the score. Tom Bailey scored a quickfire 31 to raise spirits, before picking up three wickets, as did Sajid Mahmood, as Glamorgan collapsed to 150 for nine.

Somerset unveiled their usual back-to-front batting style against Hampshire, reeling at 43 for five, laughing at stumps, 360 all out. Keith Barker grabbed six for 72, picking off the Somerset top order – none who passed double figures apart from Steven Davies. The rearguard started with 45 from Tom Banton, and was bolstered by an eighth wicket stand of 171 between Lewis Gregory (107) and Roelof van der Merwe (88).

Marcus Harris plundered 148, his second century in succession, put Leicestershire in a happy position against Gloucestershire. They ended the day at 357 for five.

Worcestershire crumbled for 131 at New Road as Brydon Carse and Matty Potts snaffled four wickets each. Durham ended the day leading by nine with six wickets in hand, bolstered by 52 from Alex Lees.

Fifties from Lyndon James, Steven Mullaney and Joe Clarke, who restarted his innings after retiring hurt, inched Nottinghamshire on to the front foot against Essex. Peter Siddle finished with three for 76.

Sam Hain (77) and Michael Burgess (71) kept Warwickshire afloat on a muggy day at Derbyshire. Sam Conners had the top order in a pickle, taking the first four wickets, before the middle-order solidified to see them towards 272 for nine at stumps. 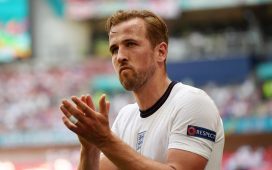 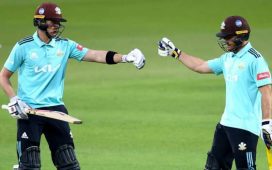 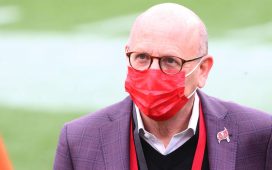 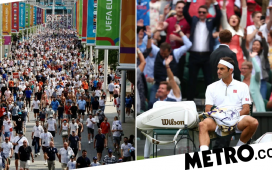