IT was a roll call of who is who in the traditional institution, the political class  and the business community on Saturday in Sokoto when a daughter of the Sultan of Sokoto, Muhammad  Sa’ad Abubakar and a son of a former governor of Bauchi State, Isah Yuguda, were united in marriage.

A Federal Government delegation was led by the Chief of Staff to the president, Abba Kyari and Secretary to the Government of the Federation, Boss Mustapha to honour Fatima and the groom, Mahmoud.

The Emir  of Kano, Muhammadu Lamido Sanusi, the Emir of  Gwandu, Muhammadu Iliyasu Bashar, the Emir of  Bauchi, Alhaji Suleiman Adamu,  the Emir of Argungu, Samaila Mera were also there as were frontline businessman  Alhaji Aliko Dangote, prominent Islamic clerics and other well-wishers.

The programme was conducted by the Sarkin Malaman Sokoto, Shiekh Buhari Siriddawa after the payment of N50,000 as dowry .

The wedding Fatiha was followed by special prayers to commemorate the 63rd birthday of the Sultan.

The prayers were  led by the Chief Imam of Ghana, Sheikh Usman Sharubutu.

President Muhammadu Buhari also felicitated with the Emir on his birthday and the wedding. 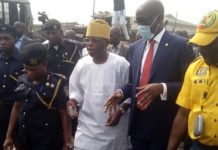