As Asia set new records for funding last year, it was a list of familiar names that led the charge both in terms of dollars invested and number of deals done.

SoftBank Vision Fund, Temasek Holdings, Tiger Global and Sequoia Capital China were some of the investment firms that helped drive 2021 investment funding in the region to $165.1 billion—up 50 percent from 2020—according to Crunchbase data.

Grow your revenue with all-in-one prospecting solutions powered by the leader in private-company data.

In terms of dollars, no firms led or co-led bigger rounds in the region than SoftBank and Temasek. 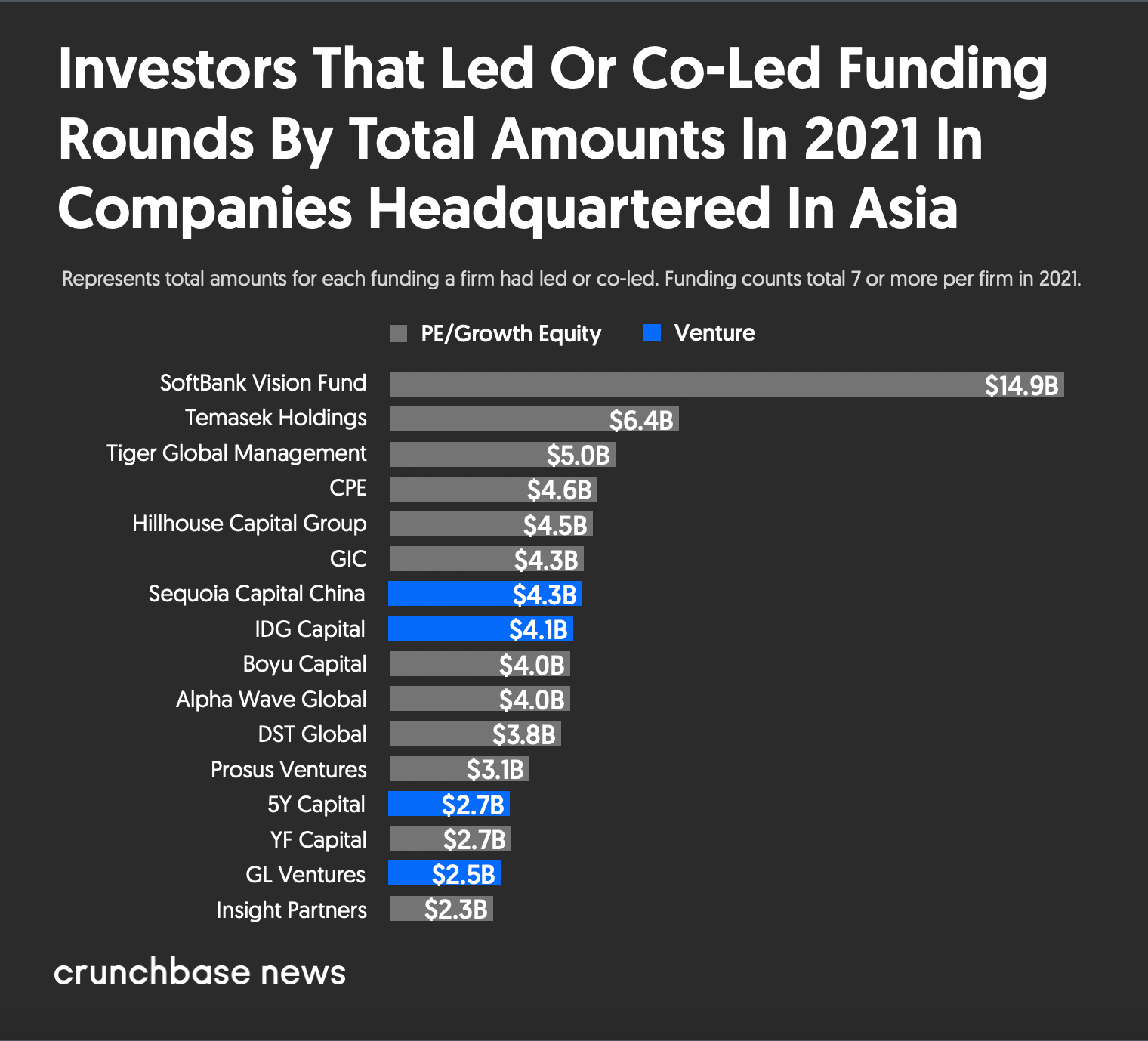 The nearly $15 billion of rounds SoftBank led or co-led represents an almost 150 percent increase over the $5.5 billion worth of rounds it led or co-led in 2020. Something similar is true for Temasek and Tiger Global, which both led or co-led rounds worth around $1.5 billion in 2020 but significantly stepped up their game in Asia last year.

Some of those large rounds led by these firms included:

Perhaps the most surprising aspect when looking at these numbers is not the fact these firms write large checks, but the number of checks they were willing to write. Tiger increased the number of rounds it co-led by more than 6x, and others like SoftBank and Temasek were not far behind. 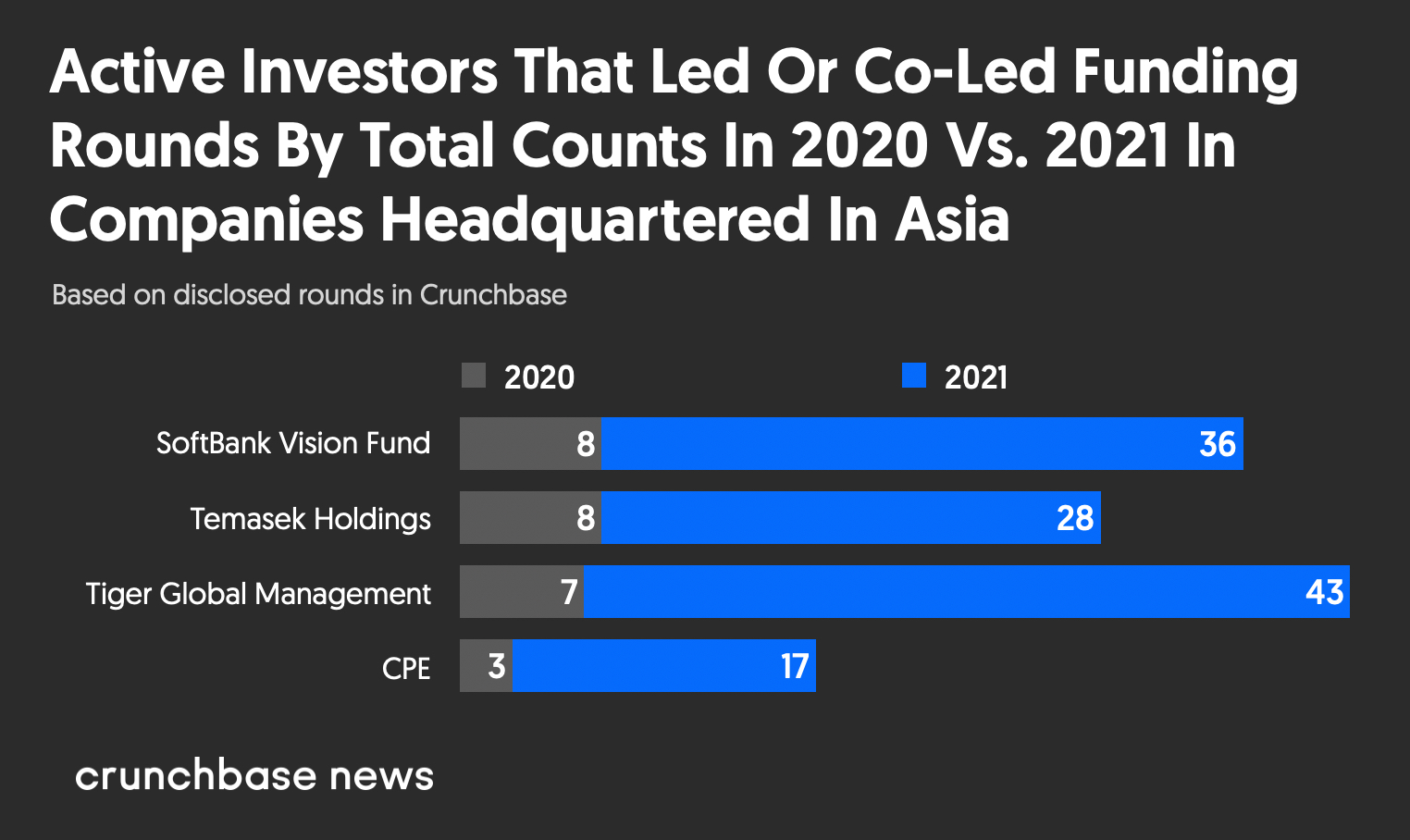 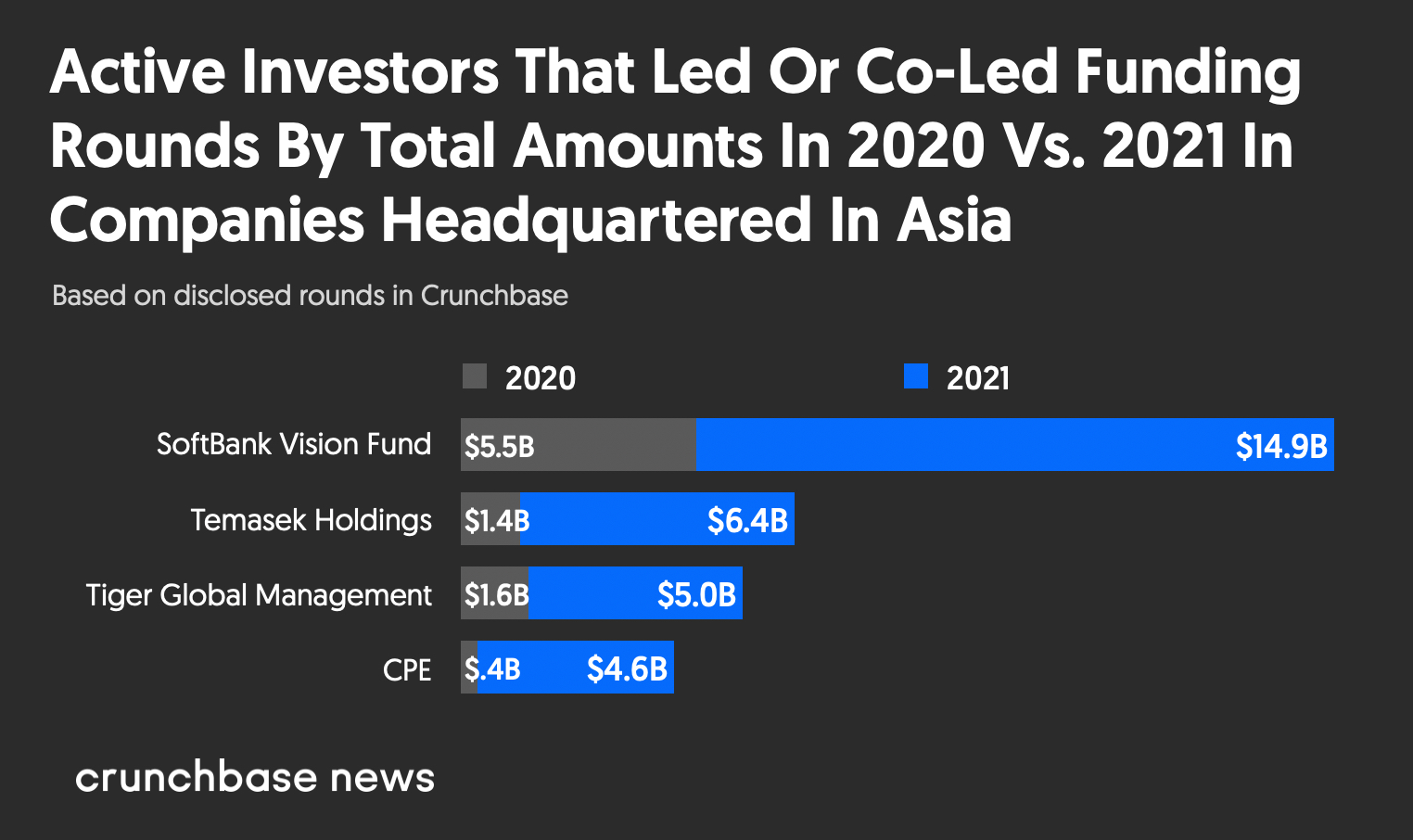 Although big investors backed big rounds, deal flow in general in Asia was strong last year, with more than 5,500 companies receiving funding—up from 5,100 the year before. While the majority of those companies were at seed-stage, the largest increase in the number of companies receiving money were early- and late-stage startups.

No firm funded more companies in the region than Sequoia Capital China. The firm surpassed the century mark in terms of companies it funded last year with 103, significantly up from 74 in 2020. IDG Capital nearly doubled the number of companies it invested in 2020. 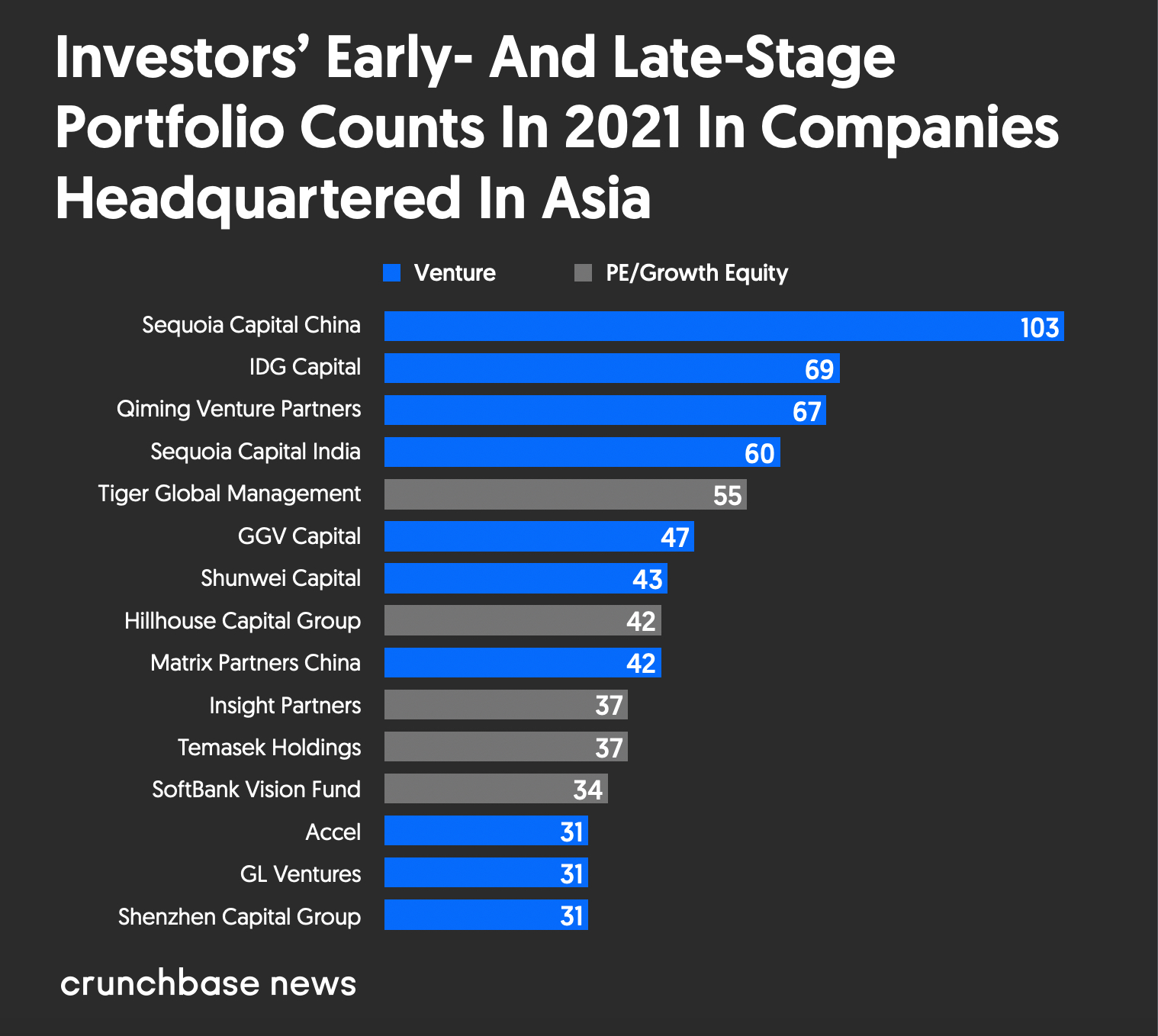 While those large numbers of bets on startups are impressive, they are not surprising. Large traditional venture firms—which top this list—have raised significantly larger funds in the last few years and have spread that money out in an attempt to hit a “big winner” even if the majority of investments don’t pan out.

Although late-stage and growth rounds normally capture the headlines due to the big dollar numbers associated with them, angel and seed rounds saw their best year yet in the region, with $5.3 billion invested in those early rounds even though the number of deals stayed pretty stagnant.

Several of the usual suspects that specialize in seed rounds led the way. Y Combinator led the charge by adding 94 new portfolio companies—up from nearly 60 in 2020—and other large U.S.-based firms including SOSV and Techstars also saw a strong year. 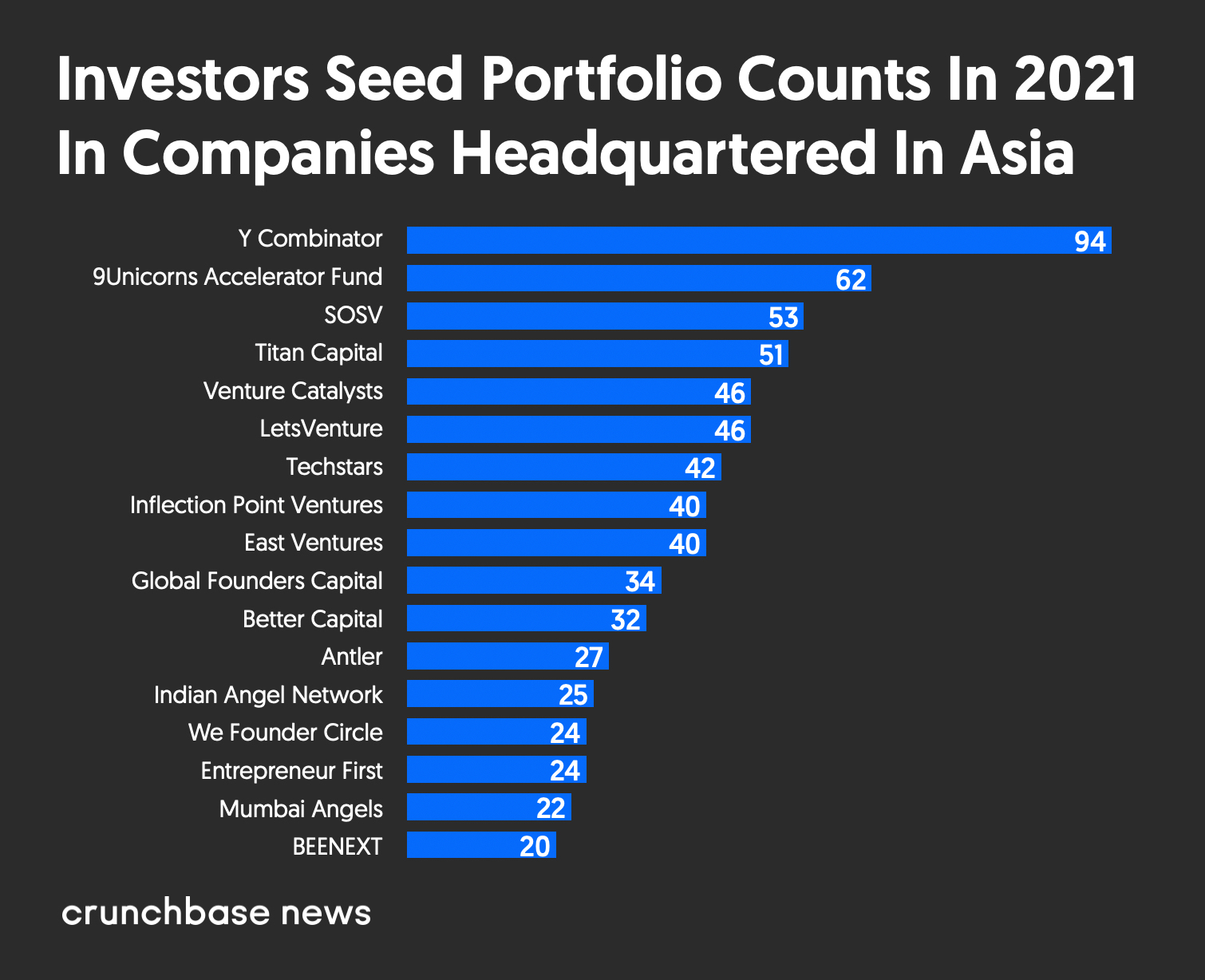 However, the seed investment numbers also illustrate the growing interest in the venture capital market in India. Four of the top 10 investors in seed rounds in 2021, in terms of the number of companies they invested in, were from India: 9Unicorns Accelerator Fund, Titan Capital, Inflection Point Ventures and East Ventures.

India, which sees the second-most venture dollars of any country in the region—albeit well behind China—had an impressive 2021. Overall, the country saw $37.6 billion invested, a 12 percent increase from 2020. While seed rounds make up a small portion of that, the appetite to invest in early rounds would seem to be a good indicator of a venture ecosystem that continues to grow and mature.

While the numbers for those who invest in Asia held few surprises—many of the top investors in both dollars and deal numbers are the same familiar names we will see on lists that chart top global or North American investment—it still is astonishing to see the proliferation of deals many big-name firms are now doing.

That’s especially true in Asia, which firms paid little attention to not that long ago. Now some of the biggest firms are placing more bets in the region—and some, like SoftBank and Temasek are placing more large bets in hopes of hitting on the next Flipkart or Coupang.

Time will tell if that strategy pays off, but with big-name firms now well entrenched in Asia, it is unlikely the region will see a downturn in venture anytime soon.

The data contained in this report comes directly from Crunchbase, and is based on reported data. Data reported is as of Jan. 7, 2022.

Note that data lags are most pronounced at the earliest stages of venture activity, with seed funding amounts increasing significantly after the end of a quarter/year.

All funding values are given in U.S. dollars unless otherwise noted. Crunchbase converts foreign currencies to U.S. dollars at the prevailing spot rate from the date funding rounds, acquisitions, IPOs and other financial events are reported. Even if those events were added to Crunchbase long after the event was announced, foreign currency transactions are converted at the historic spot price.

Early-stage consists of Series A and Series B rounds, as well as other round types. Crunchbase includes venture rounds of unknown series, corporate venture and other rounds above $3 million, and those less than or equal to $15 million.

Technology growth is a private-equity round raised by a company that has previously raised a “venture” round. (So basically, any round from the previously defined stages.)

Stay up to date with recent funding rounds, acquisitions, and more with the
Crunchbase Daily.