Soccer-Solskjaer says Fernandes will be allowed to take risks 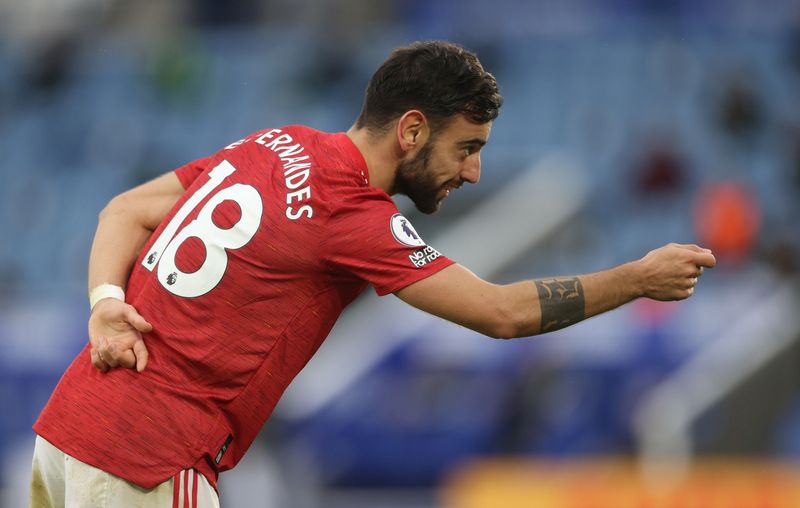 (Reuters) – Manchester United manager Ole Gunnar Solskjaer admits Bruno Fernandes frustrates him at times by trying a difficult pass when an easy option is available but says the midfielder must be allowed to take risks if he is going to influence the game.

United drew 2-2 at Leicester City in the Premier League on Saturday and Fernandes was involved in both United goals, as well as one of Leicester’s.

He slipped in Marcus Rashford for the opener in the 23rd minute at the King Power Stadium but gave the ball away cheaply in the buildup to Harvey Barnes’s equaliser.

The Portuguese international made amends by scoring in the in the 79th minute but Leicester grabbed a point thanks to Axel Tuanzebe’s late own goal, which denied United the chance to go second behind Liverpool.

Solskjaer said Fernandes was “a player who impacts results”.

“He creates chances, scores goals, takes risks – which any United player should be allowed to do and be brave enough to do,” he told reporters.

“He’s definitely a brave boy. He sees the pass.

“Sometimes I might tear my hair out and say that there’s an easier pass … but you can’t take that away from Bruno. You want him to be the X-factor who has players ahead of him making runs so I’m pleased with his influence this season and this year.

“He’s always there supporting his team mates … He does have players ahead of him making runs and giving him opportunities to play those passes… We all have a role to play, he’s playing his role to the best of his ability.”

United are fourth with 27 points, four behind leaders Liverpool, and host Wolverhampton Wanderers on Tuesday.