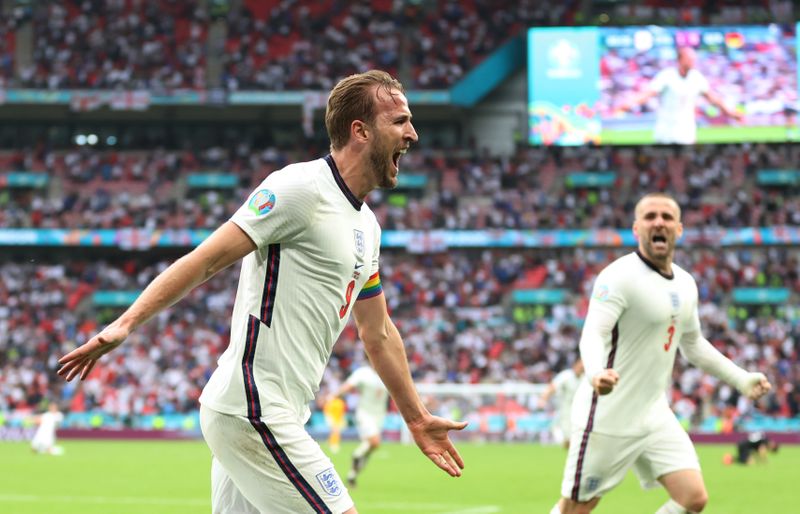 LONDON (Reuters) -Raheem Sterling and Harry Kane struck late goals as England reached the Euro 2020 quarter-finals with a 2-0 win over Germany at Wembley on Tuesday, their first knockout victory over their old rivals since the 1966 World Cup final.

England will play either Sweden or Ukraine, who meet later on Tuesday in Glasgow, in the last eight after a victory which sent the home crowd of over 40,000 into wild celebration.

It was England’s first ever knockout round win at the Euros inside 90 minutes and after a build-up dominated by talk of historic and bitter tournament losses to Germany, their focus will now be on making some history of their own.

The visitors’ defeat marked the end of Joachim Loew’s time as Germany coach after 15 years in charge, during which he guided them to the 2014 World Cup title in Brazil.

Debate will continue about England manager Gareth Southgate’s selections but it was telling that both goals came after midfielder Jack Grealish was introduced from the bench in the 69th minute when the entire tempo and mood of the game changed.

Six minutes after Grealish came on he was involved in a flowing passing move which ended with left wing back Luke Shaw deftly slipping the ball across the face of the goal for Sterling to slide in his third goal in four Euro 2020 games.

Yet shortly after scoring Sterling almost gifted the Germans a leveller when he gave the ball away on the halfway line and Kai Havertz sent Thomas Mueller through on goal.

The experienced World Cup winner had only England keeper Jordan Pickford to beat but dragged his shot wide of his right-hand post, leaving Sterling, who watched in anguish on his knees, to leap to his feet in relief.

After that reprieve, and with the crowd roaring England on, Grealish was the direct provider for the second goal, crossing from the left for captain Kane to beat keeper Manuel Neuer with a stooping header.

It was Kane’s first goal of the tournament and his return to scoring ways will be another positive for Southgate as he looks ahead at a potential route to the final.

Southgate’s decision to play a five-man defence and two holding midfielders was a cautious one, but England did start the game brightly.

Sterling tested Neuer in the 16th minute, cutting in from the left flank and finding room to unleash a drive towards the far corner which the Germany keeper did well to get across to.

Much of England’s probing was coming from Kieran Trippier down the right and he found Harry Maguire in a promising position with a lofted ball to the back post but the centre half’s header was over the bar.

Germany were enjoying plenty of possession in midfield with England sitting deep but they provided a warning of their threat when Havertz slipped through Timo Werner, although Pickford was out quickly to smother.

Just before the break Mats Hummels had to intervene quickly to clear as Kane looked to pounce after Sterling’s burst into the box had caused chaos.

After the interval Germany sensed England had lost their way and went close when Havertz’s powerful drive was superbly tipped over by Pickford.

The game was in the balance but then came Grealish, whose name had been sung by the England fans throughout the game and who lived up to those hopes and expectations by providing the spark England had been missing.

England will head into their quarter-final in Rome on Saturday knowing victory will set-up a semi and potentially a final on home turf back at Wembley.

“Any team will be looking at us and know that we’re dangerous. We want to go all the way so need to keep it up,” said Kane.

“There isn’t anything bigger than this when the expectation is on and we delivered so we should be proud but we can’t stop here. We have a vision of where we want to go and we can’t stop now. Hopefully we’ll be back here in the semi-finals and the final.”

Southgate, though, is as restrained with his words as he is with tactics and said he had been quick to calm his players down.

“We played extremely well, we deserved the win, but I’ve had to say to them straight away, I’m the party pooper; if we don’t capitalise on that on Saturday, it doesn’t count for anything.”