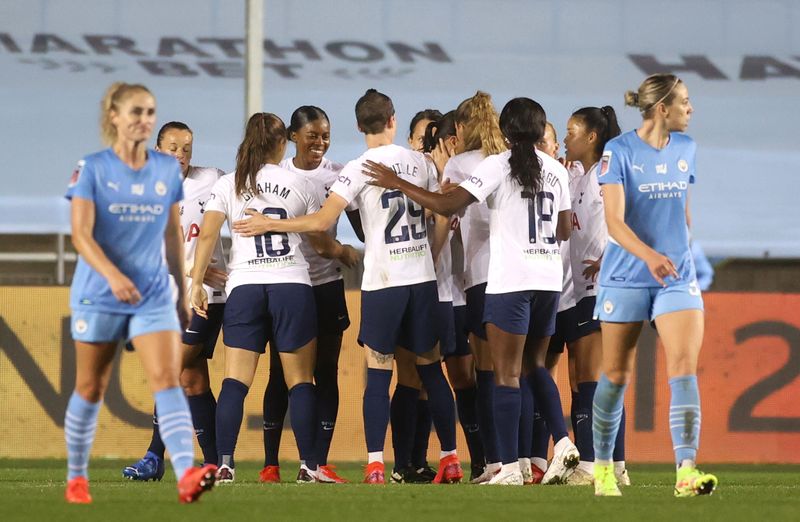 City took an early lead, but Spurs equalised against the run of play and got a late winner through an own goal, although there was a clear handball by Tottenham’s Rosella Ayane in the build-up that was missed by the officials.

Earlier in the day Arsenal, Brighton & Hove Albion and Chelsea all went on scoring sprees on the second weekend of top-flight action in England as Leicester got another baptism of fire in the top flight.

The Foxes, who lost 2-1 to Aston Villa in their first game in the WSL, went behind to strikes from Ella Toone and Maria Thorisdottir before former Red Devil Abbie McManus reduced the deficit, but a goal from Martha Thomas sealed the 3-1 win for United.

Reigning champions Chelsea bounced back from their opening-day defeat with a 4-0 drubbing of Everton that featured some brilliant goals, with Fran Kirby chipping a superb first and Sam Kerr heading home Guro Reiten’s pinpoint cross for the third.

Arsenal striker Vivianne Miedema continued her stellar scoring form, netting a brace as her side thumped Reading 4-0 at home, and there were also goals galore at Birmingham City as the home team were hammered 5-0 by Brighton & Hove Albion.

West Ham United and Aston Villa played out a 1-1 draw on Saturday.

Brighton top the table on six points, ahead of Arsenal, Manchester United and Tottenham on goal difference, with Everton bottom after consecutive 4-0 defeats.