Snowy scenes and a scintillating Monet – the week in art


Winter wonderland of the week

Winter Landscape, about 1630, by Hendrick Avercamp
Winter was fun in the 1630s to judge from this painting by a Dutch artist who specialised in snowy scenes. They had no central heating or modern thermal clothes, bubonic plague remained rife and famine was a threat – but the people in this picture couldn’t care less. They’re too busy enjoying the ice, whose vast expanse is crowded with fun-seekers. There’s even a game of ice-golf. Avercamp sets it all in a mysterious pale world of frozen whites and misty yellows. His art of winter reflects the period known as the Little Ice Age when temperatures plummeted in Europe and scenes like this also occurred on the River Thames.
• Scottish National Gallery, Edinburgh.

Frosty Morning, 1813, by JMW Turner
A man and girl stop to watch workers on a frozen roadside while another figure comes up the cold lane towards them. The earth is a hard glistening mystery. Morning’s light reveals a terrible chill in the atmosphere. Turner makes us see the beauty and bitterness of the countryside in winter.
• Tate Britain, London.

Lavacourt Under Snow, about 1878-81, by Claude Monet
Winter really is a wonderland in Monet’s scintillated eyes. Alive to the fleeting impressions of light, he joys in the blue snowy foreground giving way to the golden glitter of an icy sky.
• National Gallery, London.

Massacre of the Innocents, circa 1565-67, by Pieter Bruegel the Elder
The first artist to show the wonder of winter was Bruegel – but there’s not much skating going on in this snowbound village where soldiers have arrived to slaughter newborns at the behest of King Herod. Rudolf II, who owned this, had much of the violence painted out – perhaps so he could sit back and enjoy the snow.
• Royal Collection, Windsor Castle.

Winter, 1643, by Wenceslaus Hollar
Not good king Wenceslas from the carol, but the artist who bore his name – and whose vision of a winter’s day in 17th-century London is surprisingly sensual and tantalising. Who is this masked woman spotted at Cheapside in fine winter clothes while roundheads and cavaliers were battling it out? Hollar is so entranced he forgets the cold.
• British Museum, London.

The three kings who followed a star to the baby Jesus came bearing gifts of gold, frankincense and myrrh. But one of them, Balthasar, caused a revolution in art with the dawning of the Renaissance when his colour began to be emphatically depicted as black. In fact, the trumpeting, joyous festive subject of “the adoration” inspired some of the richest portrayals of black people in European art. Read more here.

We ventured inside the fortress of the new Lambeth Palace Library

Albrecht Dürer may not have written Lament on Luther

Architectural beauty is the subject of Trump’s latest executive order

Finches, giraffes and salamanders seized the big prizes in the Nature Photography of the Year competition

Vote with your feet: film, music, art and more to engage you politically

‘Wisdom and incredible strength’: the exhibition showing the lives built by Holocaust survivors

Resistance to the Myanmar regime in Chin state – a photo essay

Sou Fujimoto’s House of Hungarian Music: ‘We wanted to transform the forest into architecture’ 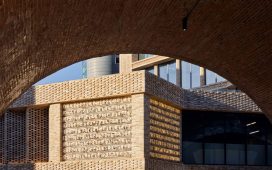