(CNN) — Lawmakers in Nigeria’s Ondo state have postponed sessions indefinitely after a snake was found in their chamber, a spokesman for the legislators said.

The snake dropped from the roof of the building as the legislators were about to meet on Wednesday in Akure, Ondo State in Nigeria’s southwest.

No one was bitten or hurt by the snake, but legislators were forced to end their session in the chaos that followed, Gbenga Omole said.

Building suffered from years of neglect

A part of the roof also caved in when they resumed sessions the following day, forcing them to postpone all meetings in the chamber, according to the lawmaker.

“When we are about to enter into plenary, a big snake just ran out of the chamber which disrupted our sitting, and we had to hurriedly leave the chamber,” Omole told reporters on Thursday.

“We are about to sit again today when a ceiling caved in directly where Mr. Speaker was sitting. The house was agitated, and when we looked around we saw the damage termites had done to most of the woodwork in the chamber,” he added.

Omole told CNN Friday the building had suffered from years of neglect, and lawmakers who came into office in May were working with the new government to address the structural problems.

A similar incident involving rodents caused a stir in 2017.

On his return from medical leave, Nigerian President Muhammadu Buhari had to abandon his office at the Presidential Villa in the nation’s capital, Abuja, after it was invaded by rats, according to his media aide.

This story was first published on CNN.com, “Snake forces Nigerian lawmakers out of chamber.” 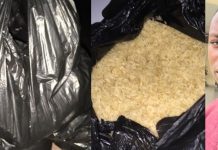 Rare landlord surprises tenants with unexpected donations thanks to COVID-19