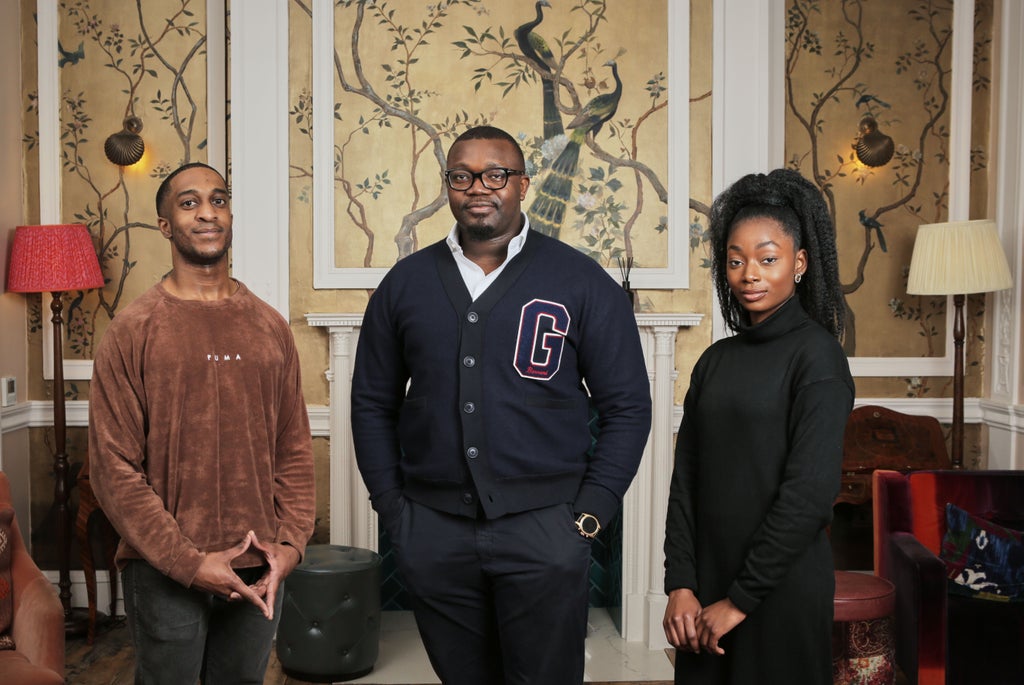 A youth empowerment organisation that helps black and minority ethnic university graduates overcome barriers to employment by changing their mindset and helping them network has become the fourth beneficiary of our £1m Skill Up Step Up campaign in partnership with Barclays LifeSkills.

2020 Change, founded by Duro Oye, works with jobless youths from under-represented ethnic groups, many of them graduates who are the first in their family to go to university but lack connections and social capital for breaking into creative industry and white-collar jobs.

It comes as the number of jobs pledged to unemployed youths who will be skilled up by our campaign passed 150. Employers stepping up to the plate included hospitality giants D&D London, who have offered 10 jobs, and CH&CO who have weighed in with six jobs, including commis chef and barista.

James Grist of D&D London, whose restaurants include Quaglino’s and Coq d’Argent, called our campaign “fantastic” and said that through it they hoped to “find the superstars of the future”. Allister Richards, chief operating officer of CH&CO, said “this excellent initiative from which we all win” will provide a platform for “discovering talent” and “realising potential”.

The youths for these particular jobs will be trained up by Springboard, which specialises in upskilling young people for the hospitality industry, and is one of three other charity partners we have announced, alongside City Gateway and First Rung. A fifth and final charity partner will be revealed in due course.

2020 Change is especially focused on boosting black youth who, as we have reported, are twice as likely to be unemployed as their white counterparts with 37 per cent of economically active black Londoners aged 16-24 unable to find work, according to the Office for National Statistics.

Mr Oye, 36, sent by his parents from Nigeria as a five-year-old and raised by his three elder sisters in south-east London, initially started 2020 Change because he wanted to help gang members make the mindset adjustment to believe in themselves and escape a life of crime.

“Ten years ago I made a documentary in which I followed six men from two rival gangs from Peckham and Brixton for 18 months,” he said. “I realised that these were immensely talented young men who had skills that weren’t being tapped. I also recognised myself in them. I had been involved in criminal gangs growing up in Thamesmead, but before I got too far down that road, I had people showing me there was something else for me. I am talking teachers, members of my church and my family. I ended up going to university and film school, but the difference between me and those gang members was quite thin – and I thought I could make a difference.”

Mr Oye began 2020 Change from the bedroom of his sister’s house in Kent. For five years it was hard going, hand to mouth, but his break came when an article about him by Jonathan Prynn in the Evening Standard was read by the general manager of Converse, who persuaded the shoe company to back him with £150,000 over three years.

Today 2020 Change puts 200 young adults a year through their 10-week “I Am Change” programme, yet what is surprising is that 80 per cent of their trainees, most of whom are self-referred, are university graduates.

Do graduates really need support to get a job? “Many of the youths we help have done all the right things – they’ve stayed out of trouble, finished school and gone to uni but still find it incredibly hard to get employed,” said Mr Oye. “They didn’t go to a Russell Group university and they don’t know how to navigate the corporate space so they end up falling short. We help them complete that last mile. At the end of our programme, they are fully equipped and ready to enter the world of work.”

‘I applied for over 70 jobs with no success: now I have a job in the civil service’

Brandon Charles believed he had the nous to succeed in life because, as a 12-year-old, he would buy chocolates from Lidl at 20p and sell them for 50p, turning a profit until he had enough to buy his first laptop, which he did with £400 – in coins – from PC World. But after graduating with a degree in computer science from Essex University and applying for scores of jobs without success, his confidence plummeted.

The 25-year-old from Croydon whose parents separated when he was two, said: “I made over 70 job applications for positions in data science and although I got interviews with the likes of Bloomberg, BBC and Amazon, I always failed at the final hurdle. It made me de-motivated and stressed that I would ever get over the line.”

When Brandon heard about 2020 Change from his younger brother and how it had helped him, he applied. “There were interesting talks from industry professionals, I learned mindfulness and most importantly, it gave me self-awareness, perspective and confidence,” he said.

Midway through the course, in October last year, he secured an interview for a civil service data scientist job with the UK Health Security Agency working on the pandemic. This time, bolstered by 2020 Change support, he nailed it and got offered the £32k a year job.

“After being unemployed for so long, It was a great relief,” he said. “I am on my way.”

‘At first I was sceptical but the programme was life-changing’

When Emmanuella Owusu-Ansah completed her degree in advertising and digital marketing at University of Northampton, she thought “doors would fly open”. But after applying for more than 100 jobs in advertising without success, the 24-year-old from Lewisham decided to put her career dreams to one side and take work as a receptionist.

Emmanuella said: “I was the first in my family to go to university and the first to go for a white collar job – but I felt locked out and hopeless. There was no feedback, no guidance where I was going wrong – I was going round in circles.”

Later, catching up with friends from school, she noticed they had changed for the better and wanted to know why. “One friend suddenly had purpose and was much more present. The others, too, seemed transformed and focused. Turns out they had been on the “I Am Change” programme with a group called 2020 Change. I thought, if it can work for them, it can work for me.”

Emmanuella signed up. “Initially part of me felt sceptical, having heard about so many courses, but actually this one was life-changing,” she said. “The principles we were taught were powerful, including self-discipline and follow through. And through the course I came to understand myself better – what I wanted to do and why I wanted to do it.”

Emmanuella, who today comes across with great confidence, applied for a job at Manning Gottlieb ad agency. “The 2020 Change programme teaches you how to present yourself at interview and come across as knowledgeable and self-assured and I put this into good practice when I interviewed,” she said.

She broke into a broad grin. “They took me on. I have achieved my dream of getting work in an ad agency. I started last March and I have been there ever since.”

Our campaign in a nutshell

What are we doing? We have launched Skill Up Step Up, a £1m initiative in partnership with Barclays LifeSkills to upskill unemployed and disadvantaged young Londoners so they can be “work ready” and step up into sustainable jobs or apprenticeships.

Why are we doing this? Youth unemployment in London has soared by 55 per cent to 105,000 since the start of the pandemic, meaning that 21 per cent of 16- to 24-year-olds are jobless at a time of record job vacancies of 1.17 million countrywide. This mismatch, caused largely by an employability skills and experience gap, is leading to wasted lives and billions of pounds of lost productivity for our economy.

How will it work? The £1m from Barclays will provide grant funding over two years for up to five outstanding, handpicked charities that provide disadvantaged jobless young Londoners with employability skills and wrap-around care to get them into the labour market and transform their lives. The charity partners we have announced so far are:

2. City Gateway: they will get young people work ready with a 12-week employability programme, including digital skills, a work placement, CV and interview skills and a dedicated one-to-one coach, extending to up to 20 weeks if they need English and/or maths qualifications, enabling them to gain entry level positions including apprenticeships in a wide range of sectors, including finance, digital media, marketing, retail, property and IT.

3. First Rung: they will help jobless young people into employment and apprenticeships by providing guidance, identifying career options, building their CVs and preparing them for interviews. Through coaching and mentoring, they will help them develop self-confidence, resilience, teamwork skills and pro-activity. Where necessary, participants will get help improving their English, Maths and digital skills. They will also engage with employers in North London to transform the lives of young people in their community.

4. 2020 Change: This group based in Covent Garden takes jobless youths aged 17-30 – from under-represented ethnic groups or with low socio-economic backgrounds – and makes them work-ready. They do this through their part-time 10-week “I Am Change” programme, which works on “mindset adjustment” and teaches corporate etiquette, mindfulness, financial literacy and digital skills as well as traditional CV and interview skills. The course includes TV and film workshops and they provide links to the creative industries through their Mentor Match Up programme.

How can the young and jobless skill up? If you are aged 16-24 and want to upskill towards a job in hospitality, contact Springboard here.

If you want to upskill towards a job in any other sector, contact City Gateway here.

How can employers step up? We want companies – large, medium and small – to step up to the plate with a pledge to employ one or more trainees in a job or apprenticeship. They could work in your IT, customer service, human resources, marketing or sales departments, or any department with entry level positions. You will be provided with a shortlist of suitable candidates to interview. To get the ball rolling, contact the London Community Foundation, who are managing the process on: skillup@londoncf.org.uk

How can readers help? The more money we raise, the more young people we can skill up. To donate, click here