Architect Jaimie Shorten’s will install six singing shark sculptures leaping from a London canal as this year’s pavilion for the Architecture Foundation.

Titled SHARKS!, this year’s Antepavilion will consist of six model sharks containing audio equipment. Positioned to look like  they are leaping from the murky canal, the sharks will sing and give lectures on architecture and urbanism.

Shorten’s winning design is a tongue-in-cheek comment on Hackney Council’s decision to serve enforcement notices against two of three previous Antepavilions, which references a well-known planning battle over a large shark embedded in the roof of a terrace near Oxford.

The annual Antepavilion competition held by the Architecture Foundation (AF) invites participants to design an experimental pavilion that demonstrates an “anti-authoritarian impulse”.

“First, the structure had to be located on pontoons in the canal and second it had to respond to the planning battle that the Antepavilion programme has provoked,” he told Dezeen.

In 2017 PUP Architects built a sneaky rooftop micro home disguised as an air duct on top of a warehouse as the first Antepavilion.

Next year an inflatable performance venue called AirDraft was constructed on a barge by architects Thomas Randall-Page and Benedetta Rogers. Last year Maich Swift Architects built Potemkin Theatre, a wooden tower on another part of the warehouse roof. 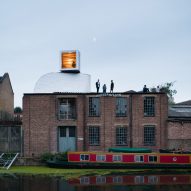 The fourth Antepavilion will draws on the council’s reaction to these predecessors and the story of the Headington Shark – a fibreglass shark that appears to have crashed through the roof of a terraced house in Headington, Oxford.

Oxford’s city council tried to remove the shark sculpture, designed by sculptor John Buckley, because it had no planning permission. However, it was allowed to remain following a local campaign.

“Russell Gray who owns Hoxton Docks and initiated the Antepavilion programme was also responsible for the installation of a World War II Russian tank on Mandela Way in Southwark which, much to Southwark Council’s annoyance, has now stood there for over twenty years,” said Woodman.

“So I think Jaimie’s proposal resonated strongly with him,” he added.

“Of course, the project is challenging to expectations of what a pavilion is but all the jury were impressed by the precision of the response to the physical and cultural context.”

Each of the six sharks will be movable so that the pavilion can be arranged and rearranged.

Shorten initially planned for the sharks to be clustered in a tableaux reminiscent of artist Théodore Géricault’s 1819 oil painting The Raft of the Medusa, which depicts the survivors of a shipwreck menaced by sharks.

In light of the coronavirus pandemic sweeping the globe, Shorten suggested the sharks could be separated to demonstrate social distancing measures.

Sponsored by property developer Shiva, Antepavilion’s winning architect receives £25,000 to execute their design. The construction of the fourth Antepvalion could be delayed due to coronavirus, the AF has warned.

Fans of shark-related design can also enjoy photos of a $100,000-a-night hotel room decorated with Damien Hirst artworks of sharks preserved in tanks of formaldehyde.

Wing and a prayer: the bizarre Chicken Church of Java

From V-Max to V8: Sydney’s only drive-in cinema reopens – in pictures

A comic for Covid-19: the tale of a plague-hit Derbyshire village

C.G. Jung’s The Tree of Life: from Norse gods to eastern mysticism