Manila: Six inmates were killed and 33 wounded during a fight in an overcrowded jail in the Philippines, authorities said Tuesday, in the second such incident in as many weeks.

An investigation was under way into the cause of the violence that Solda said started as a fight between two inmates before others joined the fray. It is not clear what weapons were used.

A ban on family visits since the start of the pandemic may have been a factor, Solda said.

“It’s been almost two years that we don’t have physical visitation in our facilities because of the Covid-19, so we can’t set aside the angle that this could be one of the reasons why others joined in the fight between the two PDLs (persons deprived of liberty),” Solda told AFP.

Security has been beefed up to maintain order in the facility, he added.

Violence is common in Philippine jails where inadequate infrastructure and a slow-moving and overburdened judicial system means cells are sometimes filled to five times their capacity.

About 1,900 inmates were squeezed into Caloocan City Jail that is designed for fewer than 200, Solda said.

The latest incident comes after a fight at New Bilibid Prison in the capital on January 2 left three inmates dead and 14 wounded.

Improvised guns and bladed weapons were used in the clash at the nation’s biggest prison. 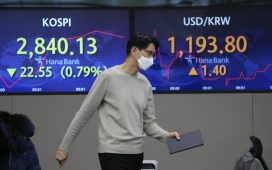