Sienna Miller and ex Tom Sturridge cosy up during holiday with daughter Marlowe, six, in Rome


Sienna Miller and ex Tom Sturridge are the ultimate friendly exes as he gifts her a rose, they play-fight with an ice-cream and cosy up during holiday with daughter Marlowe, six, in Rome

By Ciara Farmer For Mailonline

They parted ways in 2015, after four years of dating.

Yet Sienna Miller proved there is absolutely no acrimony in her platonic friendship with her ex Tom Sturridge as they enjoyed a sweet and fun-filled jaunt to Rome with their daughter Marlowe, six, who they co-parent.

The Layer Cake star, 37, was a vision in a flirty white slip dress in a nod to her trademark boho style while The Boat That Rocked actor, 33, went casual in a denim jacket while they frolicked with an ice-cream while she draped her arms over him. 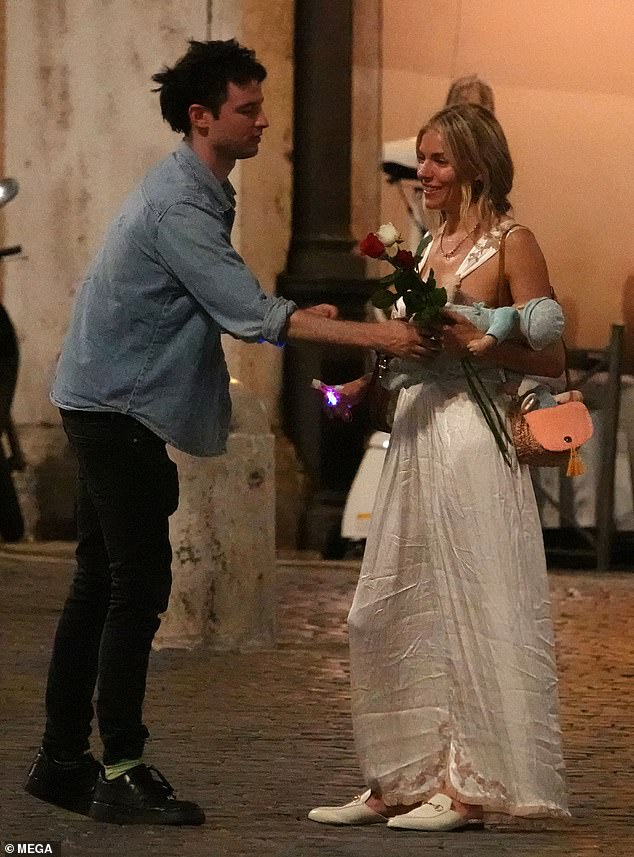 Roses for a rose: Sienna Miller proved there is absolutely no acrimony in her platonic friendship with her ex Tom Sturridge as they larked around in Rome

Sienna looked simply sensational for the night out as she donned the vintage-inspired slip dress which featured a lace trim and hunk loosely off her lithe frame.

She added a slick edge to the floaty style by slipping on a pair of white Gucci loafers with an open-back – in a move which contrasted with her boho look.

Her blonde locks were fastened in a loose plait falling from the nape of her neck while tendrils framed her face, which appeared dewy and make-up free.

Last week, Sienna treated fans to a rare insight into her role as a mother as she lifted the lid on her relationship with Marlowe in a new interview. 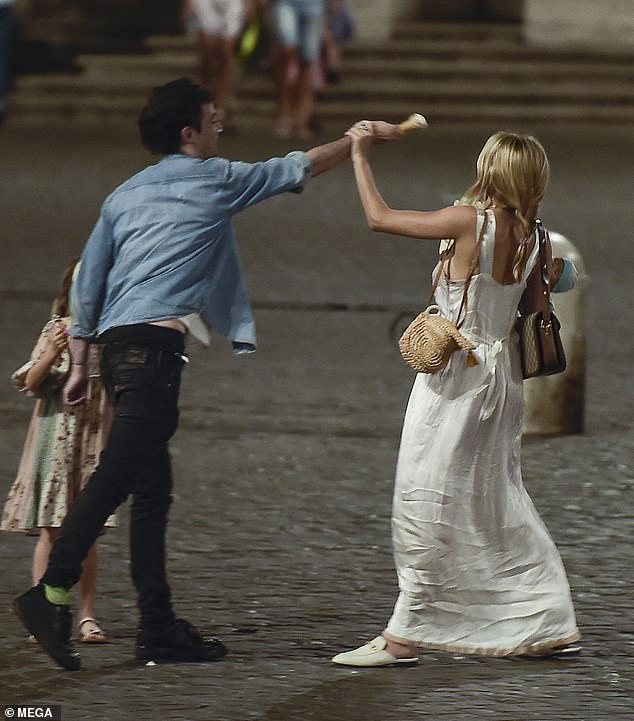 Food fight! The Layer Cake star, 37, was a vision in a flirty white slip dress in a nod to her trademark boho style while The Boat That Rocked actor, 33, went casual in a denim jacket 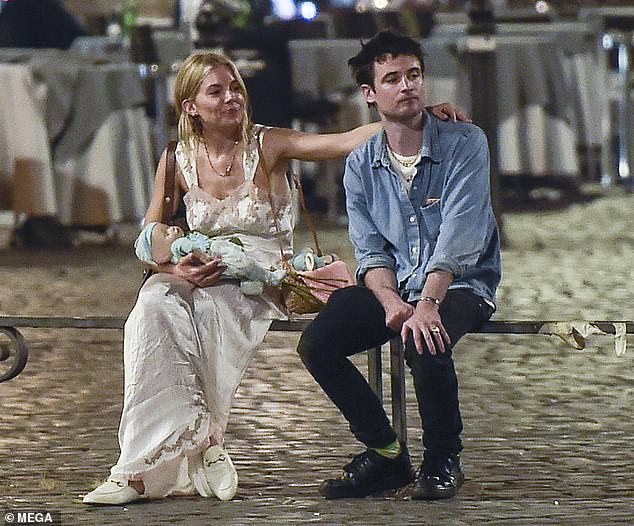 Hold me close: Sienna draped an arm casually around Tom’s shoulder as they sat watching Marlowe play in the street 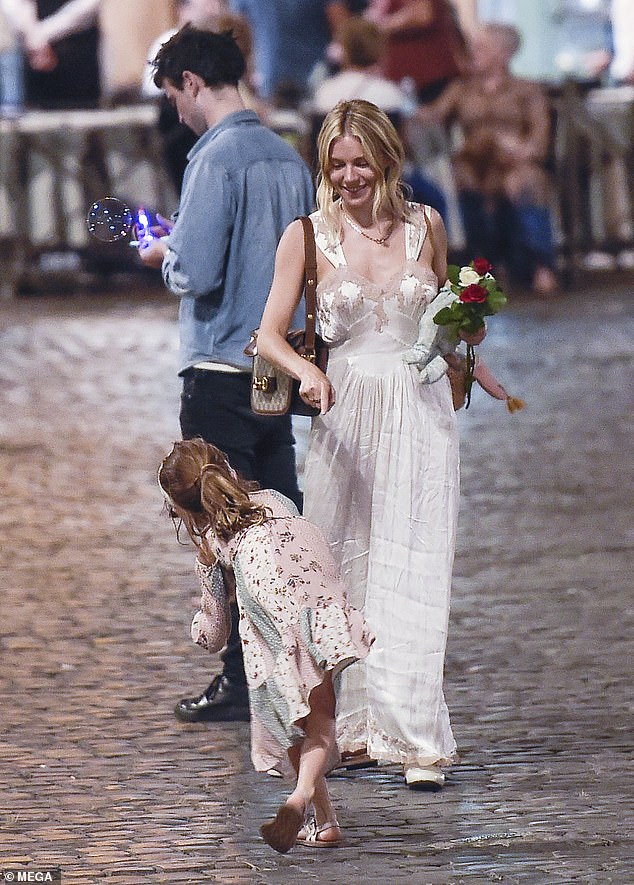 Teehee: She was beaming down at her beloved daughter as she played in the street

The Alfie star suggested her mini-me could follow in her acting footsteps as she revealed she shares many similarities with her only child, who she hailed as ‘heaven’.

Sienna told PEOPLE: ‘My daughter challenges me and is a real mirror. When you are raising a child you see aspects of your character in that person, reflected back, and it’s the most loving, intense relationship that I have. There’s nowhere to hide’.

The blonde beauty, who was in a relationship with Marlowe’s father Tom, 33, from 2011 till 2015, revealed that while she shares her ‘stubborn’ qualities, she also views her bundle of joy as ‘her ‘own’ person. 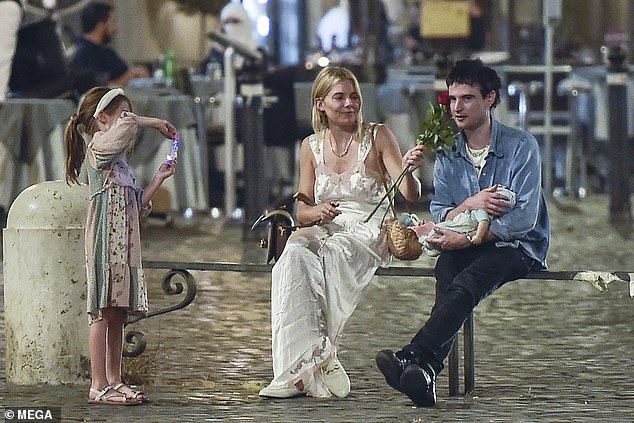 Coming up roses? While Marlow clutched a light up toy, Sienna held a rose and Tom held one of his daughter’s toy doll 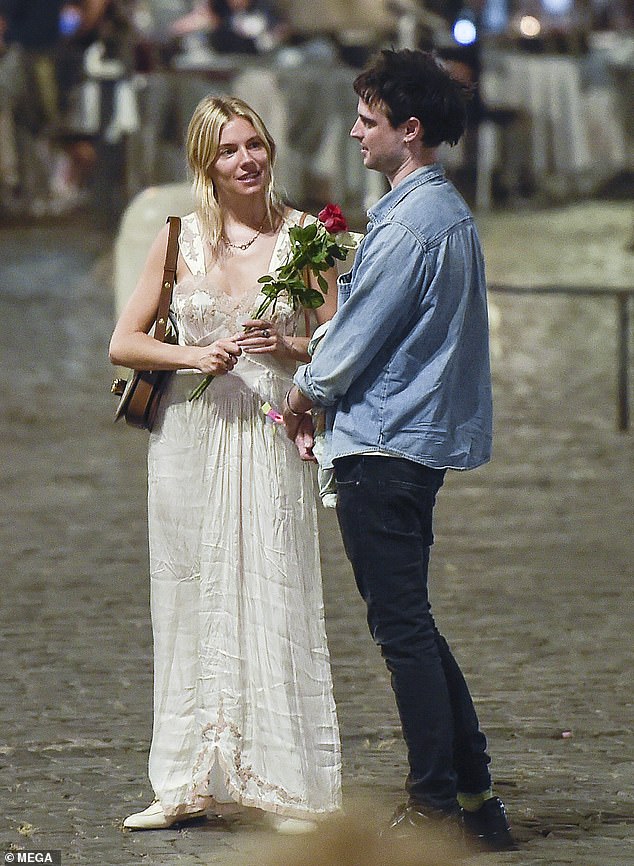 Sweet gaze! Sienna was deep in chat with her beloved ex as they hit the Italian streets

Sienna also insisted she would like to add more kid-friendly projects to her line of work so Marlowe, who she described as ‘performative’, can appreciate her career.

‘It’s a very fun world for a kid. Sets you can run around on, growing up and dressing up in funny clothes, it’s very much a sort of circus-gypsy existence and that suits her’, she explained.

Meanwhile, Sienna will portray the role of Roger Ailes’ wife Elizabeth in the upcoming drama miniseries The Loudest Voice. 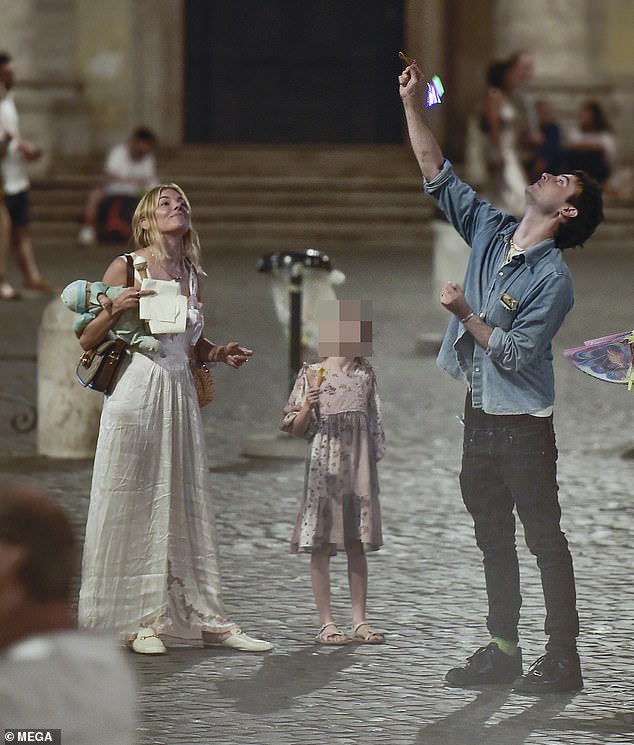 Woo! They parted ways in 2015, after four years of dating 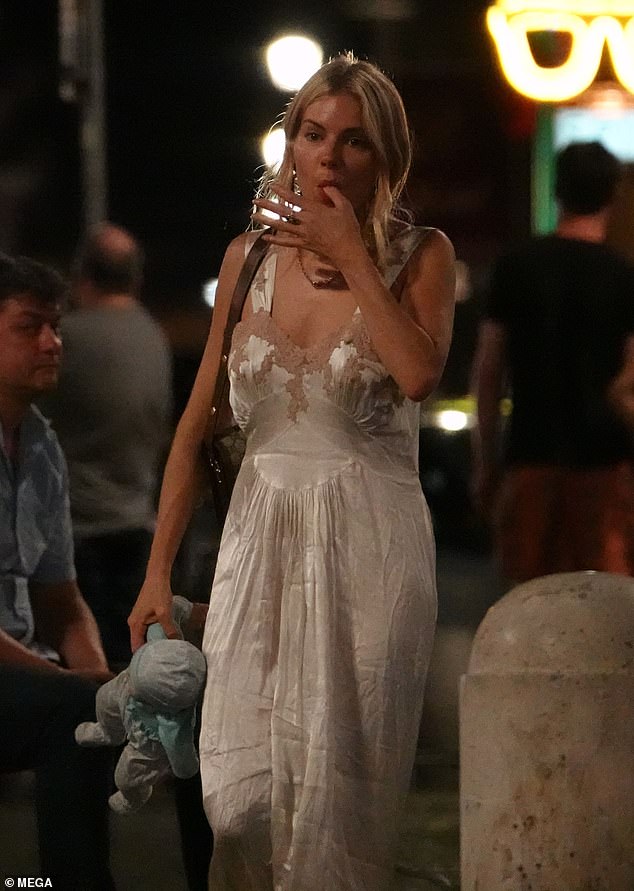 Feeling icy: She appeared to be sporting nightwear for outerwear in the sizzling gown