Americans were expected to open their wallets on Black Friday even after getting a jump on holiday spending in the weeks before, undaunted by higher prices and less generous discounts.

The day after the US Thanksgiving holiday has traditionally drawn consumers chasing deals in stores and online.

Almost two-thirds of Black Friday shoppers in the US planned to go to stores rather than shop online this year, up from 51 per cent in 2020, before coronavirus vaccines were widely available, according to a National Retail Federation survey.

In-store sales were up 39.8 per cent over last year as of mid-morning on Friday on the US east coast, according to Mastercard SpendingPulse. Total retail sales, excluding cars, rose 12.1 per cent.

Consumers were on track to spend between $8.8bn and $9.6bn online on Friday, according to Adobe Analytics, meaning that ecommerce sales could surpass the record $9bn spent last year. On Thursday’s Thanksgiving day, ecommerce spending totalled $5.1bn, Adobe said.

There was record spending in the UK on Black Friday, according to data from credit card issuer Barclaycard Payments. Transactions were up by 2.4 per cent by the evening compared to 2019 levels and up 23 per cent compared to 2020.

“We should be set for one of the most successful Black Friday shopping sprees on record,” said Rob Cameron, chief executive of Barclaycard Payments.

Many US consumers have sought to finish holiday shopping earlier than usual, worried that supply chain bottlenecks could make some gifts hard to find and delay ecommerce deliveries.

Almost 59 per cent of US consumers started shopping earlier than in 2020, according to market research group GlobalData. A McKinsey survey found that 31 per cent of respondents had already completed at least three-quarters of their holiday shopping by early October, citing in part supply concerns.

Early holiday shopping lifted US retail sales to a 1.7 per cent month-to-month increase in October, a bigger jump than economists anticipated. Adobe said that online shoppers have spent more than $75bn since the start of November, a 20 per cent gain over the same period last year.

The average discount on Thanksgiving was down 7 per cent year on year in the US, according to Salesforce. While order values were up 11 per cent, consumers bought 3 per cent fewer items. 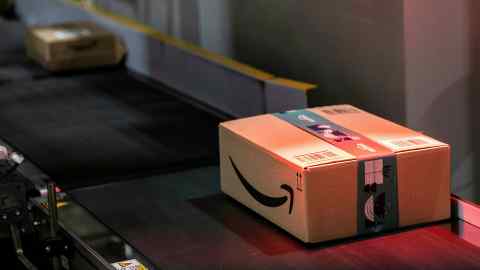 Despite congestion at ports and warehouses, some of America’s biggest retailers including Walmart and Target managed to secure more merchandise compared to the lead-up to last year’s holiday season. Home Depot and Lowe’s, the home improvement chains, booked robust sales in the three months to the end of October as shoppers bought up holiday decor.

Daniel Ives, analyst at Wedbush, forecast that Apple is on pace to sell about 40m iPhones between Black Friday weekend and Christmas, which would translate to a record holiday pace for the company amid a semiconductor shortage that has dragged on supply.

Electronics represented the category with the highest out-of-stock levels early on Black Friday, according to Adobe. However, laptops, televisions and smartwatches were among the most popular items among online shoppers.