Sharks and other large predatory fish avoid hunting in the warm waters at the equator and instead prefer to live in more mild conditions further north and south.

A study found the favoured hunting grounds of the animals is at latitudes between 30 and 60 degrees, a region including Europe, the USA and much of southern Africa

Researchers from the University of Bern, Switzerland, looked at records of attacks by large fish on ocean fishing lines between 1960 and 2014.

There were more than 900 million recorded incidents of sharks, tuna, sailfish and marlin trying to take the bait from longlines put out by fishermen.

The team, led by Marius Roesti, found that predatory fish were more often found hunting in mid-latitude areas than around the equator. 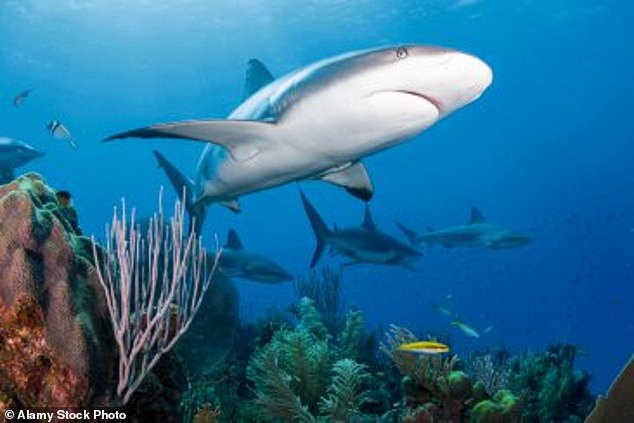 Caribbean reef sharks, Carcharhinus perezi, Jardines de la Reina, Cuba, Caribbean Sea. Researchers from the University of Bern, Switzerland, looked at records of attacks by large fish such as sharks on ocean fishing lines between 1960 and 2014.

Biodiversity tends to increase in both the oceans and on land around the equator due to the more humid climate and warmer temperatures.

Despite the wider range of species, studies of land based ecosystems found mixed evidence that they were interacting with each other more than in cooler climates.

Very little was known before this study about the geographical variation in the way ocean species interact with each other.

READ  Is Artificial Intelligence a danger? More than half of UK FEARS robots will take over

Roesti and colleagues found that predator attacks were more frequent in temperate regions – roughly between 30 and 60 degrees north and south.

They found the same pattern across four different ocean basins and over the 54 years of data – with predators having a strong preference for mid-latitude waters.

The amount of predatory fish hunting drops off again as you get towards the poles – so the their focus is almost completely on mid-latitude areas.

As you get towards the poles the main predators are marine mammals, seabirds and deep-water fish rather than sharks, tuna and marlin.

‘Since Darwin and Wallace, biologists have suggested that interactions between species become stronger towards the equator,’ the authors wrote.

They found that ‘relative predation was in no case strongest near the equator as expected under the biotic interactions hypothesis.’

‘Instead, relative predation peaked in or near the temperate zone.’

This pattern was particularly pronounced in the Southern hemisphere, where relative predation was 65 per cent stronger on average than near the equator. 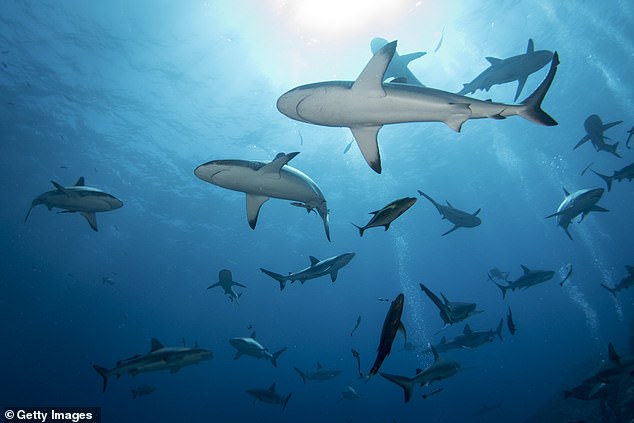 Grey Reef Sharks at Osprey Reef. Sharks are more likely to hunt in mid-latitude waters rather than warmer equatorial climates

Predator attacks were also linked to how many open ocean fish species were available in the water at the time of the hunt.

The paper’s authors say these results may help explain recent findings that the rate of formation of new and distinct species in marine fish increase away from the equator.

READ  How advertisers manipulate all our senses at once

It was previously thought that interactions between species lead to an increase in the diversity of species.

‘Perhaps the most provocative part of the species interactions hypothesis is that strong ecological interactions occurring over short time scales lead to increased species richness over evolutionary time,’ the authors wrote.

This is done either by driving speciation or by facilitating the coexistence of species.

‘In contrast to this idea, we found a negative association between the strength of relative predation and overall oceanic fish species richness across latitude in three out of four ocean basins.

The research has been published in the journal Nature Communications.

WHAT DOES THE GREAT WHITE SHARK’S DNA TELL US?

The genome of the great white shark has finally been decoded, and it may hold the key to discovering a cure for cancer.

The genome is far bigger than that of a human and contains a plethora of mutations that protect against cancer and other age-related diseases. 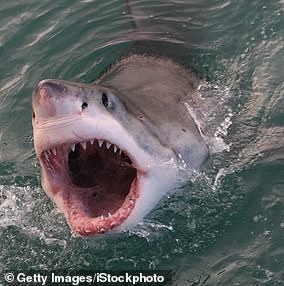 It contains an estimated 4.63 billion ‘base pairs’, the chemical units of DNA, making it one-and-a-half times bigger than its human counterpart.

Great white sharks, which measure up to 20 feet long (six metres) and weigh as much as three tonnes, are ancient giants that have been on Earth for at least 16 million years.

The animal’s genetic code also gives them enhanced wound healing which allows them to recover from severe ailments.

Experts believe the great white genome evolved to be stable and disease resistant and could be key in developing future treatments.

Early Britons ate every part of horse almost 500,000 years ago