The match looked lost as England slipped to 286-6, losing five wickets for 41 runs on day four in Leeds but Stokes dug in as the tail fell around him.

Stokes’ 76-run partnership with number 11 Jack Leach took England over the line as the hosts tied the series at 1-1 with the Old Trafford and Oval Tests remaining.

Asked about Stokes’ heroics, Australia legend Warne told Sky Sports: ‘Unbelievable stuff, high octane cricket. The atmosphere, the intensity of the crowd and to control the game the way he did was just amazing.

‘To be here to witness something like that was super special.

‘Getting to know Ben Stokes over the last couple of years, he’s one of those guys that you want in the trenches with you.

‘He’s one of those guys that trains harder than I’ve ever seen anyone train, he’s an amazing cricketer, he’s a special talent.

‘You can have all that but you still need somebody to take the opportunity and if you had to choose one guy in that England side like that you would choose Ben Stokes.

‘You still have to get it done. It’s easy to say all that but the way he did was just unbelievable.’

England great Botham added: ‘It takes a remarkable man. I said this morning that somebody had to front up and somebody has to be strong and – I’ve banged Ben Stokes’ drum for a long time now and I know other players, when they’ve seen him, you think there’s something special.

‘He’s is the special one, he is very, very valuable to cricket full stop, not just England. He will sell the game worldwide and it really is so, so important.

‘He should enjoy every moment. Enjoy it, take it in but that was a really, really remarkable performance.’ 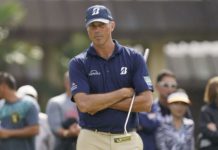