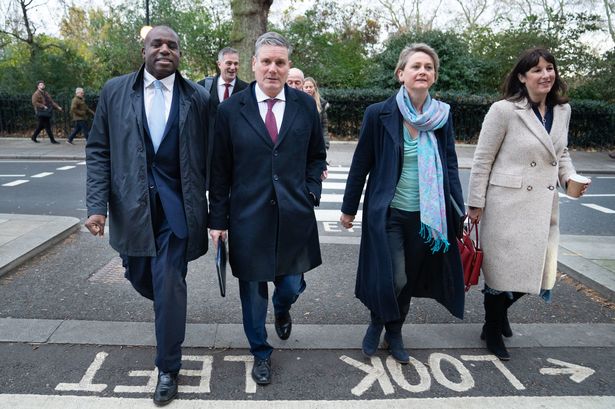 Labour’s rising stars have been recognised in Sir Keir Starmer’s second reshuffle of the year, as he seeks to create a “serious party of Government”.

Wes Streeting and Bridget Phillipson have been given big departments to look after as the leader moves his team further away from the Corbyn-era left.

And heavyweights Yvette Cooper and David Lammywon two of the biggest roles in the shadow cabinet.

Ms Rayner appeared to be blindsided when news of the reshuffle broke, as she was delivering a keynote speech on Labour ’s plans to tackle sleaze.

She said: “I don’t know the details of the reshuffle or the timing of it.”

Sir Keir and deputy Angela Rayner at the meeting this morning, after claims she was ‘blindsided’ by the details of the announcement
(

You may have been blindsided too – since it all happened on a major day of Covid news. So who’s rising up the ranks and who was demoted from a top job?

A star return to Labour’s top team, the MP since 1997 served under Blair, Brown and Miliband and came third in the 2015 leadership race.

Her job as Shadow Home Secretary – where she took on Theresa May – ended when she said she could not serve under Jeremy Corbyn.

As DWP Secretary in 2009 she faced controversy over benefit sanctions in the Welfare Reform Bill, and her views on Corbyn cast a shadow for the left.

But away from the front bench, she carved out a fearsome reputation as chair of the Home Affairs Committee, sharply interrogating Priti Patel.

Born to a union chief and maths teacher, the 52-year-old went from a state comprehensive to a first-class Oxford degree.

After a year off with ME aged 24 – “I hated every minute of it” – she worked on Bill Clinton’s 1992 presidential bid.

Following her ascent in Westminster, she and husband Ed Balls made history as the first married couple to serve in Cabinet together.

Yvette Cooper, third from left, has a long history with the Labour Party
(

The outspoken 49-year-old from Tottenham enjoys a promotion from Justice to one of the traditional great offices of state.

As a friend of Barack Obama with contacts in the US Senate, he may take more naturally to the role than ‘Red Wall’-focused Lisa Nandy.

Elected in 2000, he rose through the ranks under Blair and Brown before a 10-year backbench spell under Miliband and Corbyn.

On the back benches he campaigned powerfully for the Windrush generation and Grenfell victims, which included a friend of his, with viral speeches.

He was an outspoken anti-Brexit MP during years of rows and stirred debate in 2017 when he argued Comic Relief ‘perpetuates Band Aid stereotypes’.

But he is not easily pigeon-holed, chairing a review of racism in the justice system for the Tory government, and nominating Corbyn for leadership.

Aged 38, the former National Union of Students President and MP since 2015 will be seen as a moderniser in the top team.

He worked for the Blairite group Progress for a year after graduating and was a staunch critic of Jeremy Corbyn, joining Keir Starmer ’s front bench in May this year.

Born to teenage parents, he grew up on an east London council estate, had free school meals and was the first in his family to go to university.

He has personal experience of the NHS, having a kidney removed earlier this year due to cancer.

The 37-year-old enjoys a promotion from Shadow Chief Secretary to the Treasury to holding the Tories to account over schools.

Elected in 2010, this is the biggest role yet for the Houghton and Sunderland South MP.

A backer of David Miliband, Yvette Cooper, Owen Smith and Keir Starmer, she supported remain and a People’s Vote (second referendum) on Brexit.

Bridget Phillipson has enjoyed a steady rise through the ranks
(

It is the first Shadow Cabinet job for the 51-year-old frontbencher, who was elected to Hove in 2015.

He was a vocal opponent of Brexit and led a bid, blocked by Tories, to lower the voting age to 16.

A former special advisor and charity chief, he backed Liz Kendall and Jess Phillips in the 2015 and 2020 leadership elections.

This is the first shadow cabinet job for more than a decade for the ex-Blair and Brown minister.

From a family of seven children to a labourer and children’s home worker who grew up in Glasgow, 56-year-old was an advisor to Tony Blair before and after the 1997 election.

Shadow Europe Minister under Jeremy Corbyn, he was was sacked by the left-wing leader in 2016.

Mr McFadden lost his job for asking the Prime Minister to “reject the view that sees terrorist acts as always being a response or a reaction to what we in the west do.”

Some would see a move from Shadow Foreign Secretary as a demotion, but not the Wigan MP.

When the 42-year-old won her last job a colleague was said to remark: “That’s a lot of towns, Nandy”.

And asked if shadowing Michael Gove and the government’s key policy area felt like a demotion, Ms Nandy told BBC Breakfast: “It felt a little like coming home, to be honest.”

She has for years beat the drum about left-behind northern areas, co-founding the Centre For Towns think tank.

She co-chaired Owen Smith’s 2016 challenge to Corbyn and ran herself for the top job in 2020, coming third.

Lisa Nandy in a Mirror hustings for Labour leadership. She came third
(

The 58-year-old is moving from the Shadow Communities Secretary job to his second shadow cabinet post.

Unlike many others who’ve been promoted he was consistently a minister under Jeremy Corbyn.

Born in Hertfordshire, he worked in publishing for almost two decades before becoming an MP.

His dad played for Charlton Athletic and he knew Pulp’s Jarvis Cocker when he went to university in Sheffield.

Since September this year she had been up against Nadine Dorries, the controversial Tory minister.

Born in Swansea, she worked for a solicitors’ firm before winning Cardiff Central in 2015, ousting the Lib Dems.

She had this job before under Corbyn, but resigned from it in 2017 to vote against triggering Article 50 and Brexit.

Another sideways move, Lucy Powell shifts from the ministry of housing to the ‘ministry of fun’.

The Manchester Central MP worked at Labour HQ during the 1997 election and later helped lead an inquest into the party’s 2019 defeat.

The long-time political aide and MP since 2010 is another survivor through both the Miliband and Corbyn eras.

As shadow DWP chief he announced Labour would cut the ‘taper’ in Universal Credit – which the Tories later did.

He had suggested he was open to the idea of a Universal Basic Income but later cooled on the costly plan.

The 34-year-old was for a time Parliament’s youngest Labour MP and has enjoyed a steady rise.

More recently she has landed attacks on Tory ministers over Northern Ireland amid chaos over Brexit.

After being Shadow Northern Ireland Secretary, the Transport brief is her second job.

Few would argue the reshuffle was a demotion for the historian, who has written biographies of Attlee and Bevan.

He took a finely-judged approach to the thorny issue of migration in the face of hardline statements by Priti Patel.

Elected an MP in 2015, the 41-year-old is another of those who served in junior ranks throughout Corbyn’s time.

The former Labour leader had enjoyed a return to the shadow cabinet under Keir Starmer.

However, his job has now been split into two – one covering business and the other climate change.

This will give him more time to focus on climate change, on which he has campaigned relentlessly in recent years.

But it could prove difficult for him to land a blow on the government, given the role he’s shadowing doesn’t technically exist.

Nicknamed ‘Sparkle’, the No10 advisor in the Blair/Brown years proved a survivor even through the Corbyn era.

An MP since a 2011 by-election has had 10 years of unbroken service on the front bench including as the longest-serving Labour shadow health secretary in history.

He was moved while off sick with Covid, but insisted it was good news, telling friends he needed a new challenge.

The MP equivalent of a Duracell bunny, the lawyer was another survivor through the era of Corbyn, who was her Islington constituency neighbour.

But she’s slipped from the top of the pack since doing the Shadow Foreign Secretary job under the former leader.

She was notorious in 2014 for tweeting a photo of a house in Kent with a white van and England flags.

The lawyer was accused of snobbery and was later “squeezed out” of the 2020 Labour leadership race, not winning enough nominations to go to the members’ vote.

But her story is not what you might think – she told the Mirror in 2017 how she remembered bailiffs coming to her home, where her mum’s cats were put down because she was too poor to care for them.

The 41-year-old – moved from Transport – is another junior member of the top team and like Lisa Nandy, another voice for towns in the north.

He was a council leader in Oldham and represented councillors on Labour’s ruling NEC before winning the 2015 Oldham West and Royton by-election.

His victory defied fears Corbyn’s Labour would tank at the ballot box – at least then – and he’s been on the front bench almost ever since.