The Senate Committee on Public Account has accused officials of the Bureau of Public Enterprises of diversion of N2.5 billion from proceeds of the sale of the defunct Power Holding Company of Nigeria for the purchase of properties in Aso Savings and Loans.

The Senate query was hinged on the report of the Auditor General of Federation,  Anthony Ayine, before he proceeded on retirement.

But the BPE representative said the Bureau did not obtain any approval from the Debt Management Office when the Chairman asked him about the person that authorised the diversion of N2.5 billion to Aso Savings and Loans.

According to the BPE: “We did not have approval from DMO to pay N2.5 billion from proceed of PHCN to Aso Savings and Loans.”

Urhogbide further accused the representative of the BPE of acting in collision with Aso Savings and Loans.

The Chairman Committee further demanded for the list of staff who benefited from the properties acquired from Aso Savings and Loans.

He said it should be submitted to the Committee on Wednesday, adding that everything about the transaction was illegal.

Urhogbide said the Committee will ask the Federal Government to recover the money in Aso Savings and Loans.

READ  Nigeria: What We Want Govt to Do to End Strike - ASUU

According to him: “We are going to ask government to recover their fund you go and throw away in Aso Savings and Loans.”

BPE, in a written submission to the Committee had said: “This was a loan guarantee, but a fund placement at 5 per cent interest rate.

“It was used to negotiate a single digit interest rate to finance the bureau’s staff Housing scheme.

“There is an approval from the office of Accountant General of the Federation authorising the Bureau to establish a relationship with the organisation.

“Aso Savings and Loans has since September 2015 not be able to implement the directive by BPE to remit deposit to TSA.

“A committee chaired by Vice President is currently trying to resolve the issue with Aso savings and Loans PLC and about 16 MDAs are affected.

“Aso Savings and Loans Plc has offered the BPE some buildings and repayment of N70 million monthly to defray the deposit with accrued interest.” 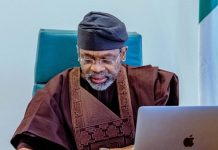 Sanwo-Olu, Aregbesola, others seek use of non-lethal weapons, designated areas for protests