Senate on Thursday confirmed the presidential nominees to serve as Commissioners for the Nigerian Communications Commission (NCC).

The confirmation followed a satisfactory report by the Ad-hoc Committee on the screening of nominees headed by Senator Folarin Teslim Kolawole representing Oyo Central Senatorial district.

Senator Folarin added that the nominees have been screened in line with NCC Act, 2003.

However, Senator Yaroe Binos Dauda representing Adamawa South Senatorial district raised the issue of poor qualification of a nominee representing North East, Aliyu Sa’idu Abubakar, saying that he has Ordinary Diploma, but was overruled by the Senate President.

Having dissolved into the Committee of the whole, nominees were all confirmed through a voice vote.

READ  'My govt will bring prosperity to Ghana' – Nana Addo

Remembering my father’s Biafra: The politics of erasing history

What government must do before re-opening churches –Archbishop Martins

Reps to define ‘ the poor’ in FG’s social interventions 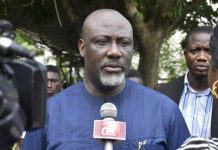