Tiny droplets which can harbour small pieces of urine, faeces, vomit and viruses float into the air at mouth-level after a toilet is flushed, a new study has warned.

It shows that tens of thousands of particles are spewed into the air by a flush and can rise several feet above the ground.

Droplets were spotted floating around five feet (1.5m) in the air for more than 20 seconds, with researchers pointing out this poses a risk of inhalation.

Small droplets and aerosols are so light they can float around in the air on tiny draughts, before settling on a surface.

Researchers say that they can also act as vectors for diseases. SARS-CoV-2, the virus which causes Covid-19, for example, has been found alive in human faeces.

Therefore, scientists warn that flush-propelled particles from an infected person’s faeces could float into the air, be sucked in by a passer-by, and infect them. 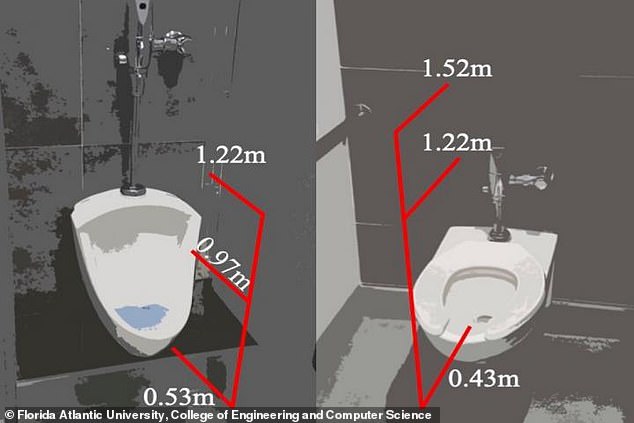 A study found aerosol droplets from a toilet flush can float around five feet (1.5m) in the air for more than 20 seconds, with researchers pointing out this poses a risk of inhalation

Scientists assessed how droplets ranging in size from 0.3 microns to 3 microns behave after a flush in a toilet, a toilet with the lid down, and a urinal.

Dr Siddhartha Verma, co-author of the study at Florida Atlantic University, said: ‘Both the toilet and urinal generated large quantities of droplets smaller than 3 micrometers in size, posing a significant transmission risk if they contain infectious microorganisms.

‘Due to their small size, these droplets can remain suspended for a long time.’ 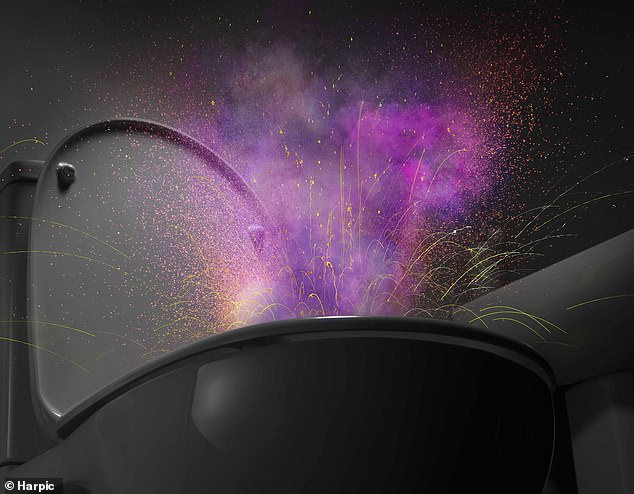 Harpic, the chemical company, recently used high-speed specialist cameras to capture the firework display of aerosol particles caused by a toilet’s sloshing water in a studio 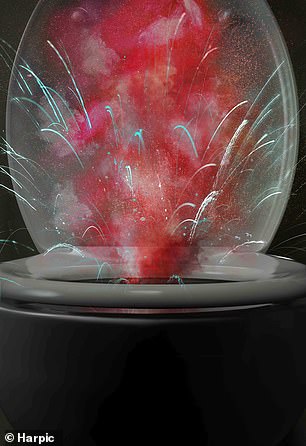 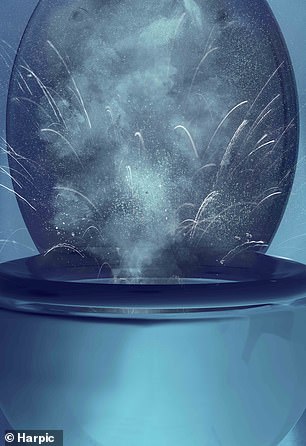 Striking visuals from Harpic add to a growing movement to encourage people to put the lid down before flushing. A previous study found coronavirus particles can spray potentially infectious parties in a cloud up to three foot high

Scientists flushed toilets more than 100 times and measured the droplets with a particle counter placed at various heights.

The toilet and urinal were flushed manually five times after 30, 90, 150, 210, and 270 seconds, with the flushing handle held down for five seconds.

Droplets were detected at heights of up to 5 feet for 20 seconds or longer after the flush, and this number dropped when the lid was down, but not by much.

After a flush there was a 69.5 per cent increase in the number of particles sized 0.3 to 0.5 micrometers. 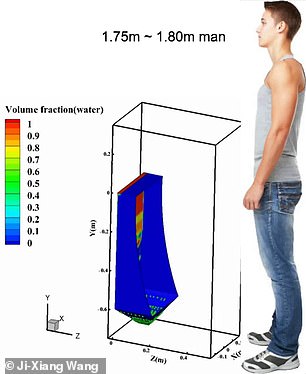 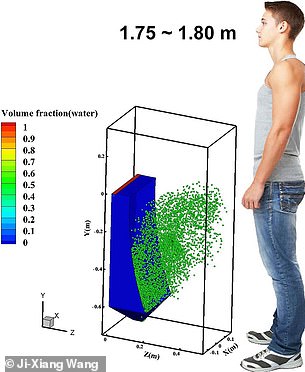 The flush of a urinal causes coronavirus-laden particles to ‘climb violently’ into the air, a study found last year, with experts recommending wearing masks in public toilets.  Pictured, the researcher’s model of a urinal, seen at the start of the flush (left) and seconds later (right)

Why you should wear a mask when using a urinal

The flush of a urinal causes coronavirus-laden particles to ‘climb violently’ into the air, a study found, with experts now recommending wearing masks in public toilets.

Researchers from China simulated how particles are expelled from urinals when the latter are flushed — creating an invisible spray of potentially infectious droplets.

They found that 57 per cent of the particles are ejected away from urinal, where they can hit the thigh of a user within less than six seconds.

The findings follow previous work by the team which found regular toilets also issue clouds of potentially viral aerosols when flushed — especially if the lid is left up.

However, the spray from urinals is predicted to travel both faster and further.

Urinals are more frequently used in densely populated areas — and the researchers noted that they pose a ‘serious public health challenge’.

Smaller aerosols pose a risk of transmission because they are so light they can drift and linger n the air for long periods of time.

Minute draughts and vortices produced by people walking in and out can kick them continuously higher, like playing keepy-ups with a slowly falling balloon.

But bulkier, bigger droplets are also a risk because, although they fall to the ground sooner, they can settle on surfaces and protect a pathogen for several hours.

If a person was to then inadvertently come into contact with this droplet, the infectious agent would be able to enter their body.

‘Aerosolized droplets play a central role in the transmission of various infectious diseases including COVID-19, and this latest research by our team of scientists provides additional evidence to support the risk of infection transmission in confined and poorly ventilated spaces,’ said Dr Stella Batalama, co-author of the study from Florida Atlantic University.

The study, published in the journal Physics of Fluids, builds on previous research which also exposed the unsanitary threat posed by flushing toilets.

Harpic, the chemical company, used high-speed specialist cameras to capture the firework display of aerosol particles spewed into the air by a toilet’s sloshing water.

A June study found coronavirus particles can be sprayed in a cloud up to three foot high by a single flush.

A piece of research from Chinese academics published in August found the flush of a urinal causes coronavirus-laden particles to ‘climb violently’ into the air.

They found that 57 per cent of the particles are ejected away from urinal, where they can hit the thigh of a user within less than six seconds.

The researchers proposed at the time that people should wear face masks when using public toilets to avoid breathing in particles. 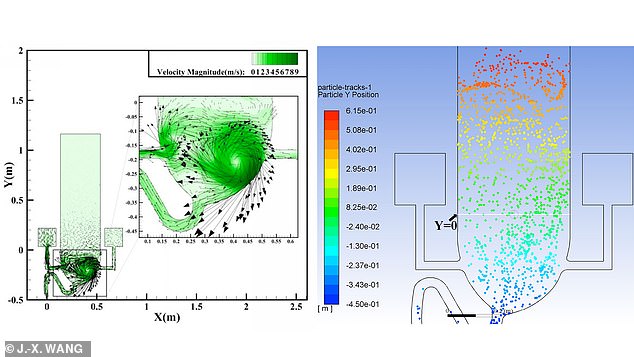 Flushing kicks up a cloud of infectious particles up to 3ft (one metre) above the water due to turbulence created by the rapid flow of water, a study found. Pictured, computer simulations showing the vortices (left) created by a flushing toilet which transport particles (right). The coloured particles on the right show the distance particles can travel, with warm colours (red) travelling further than cold colours (blue) 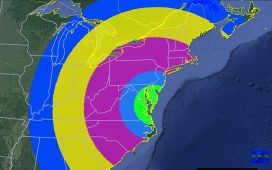 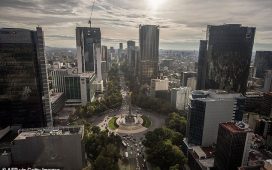 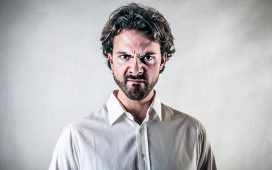 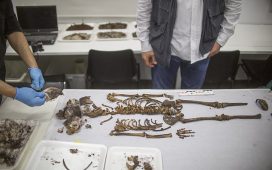