Scientists have created a mysterious phase of water – called ‘superionic ice’ – by beaming X-rays through a diamond in the lab.

Extreme conditions are necessary to produce superionic ice, sometimes referred to as ‘hot ice’, which adds to the other well-known phases of water – solid ice, liquid water and vapour gas.

Superionic ice is a special crystalline form, half solid, half liquid – and it’s electrically conductive.

It’s formed at extremely high temperatures and pressures at the centre of planets like Neptune and Uranus in the outer solar system.

Knowing more about the different phases of H2O – of which there are several – could help find life on other planets, the scientists believe. 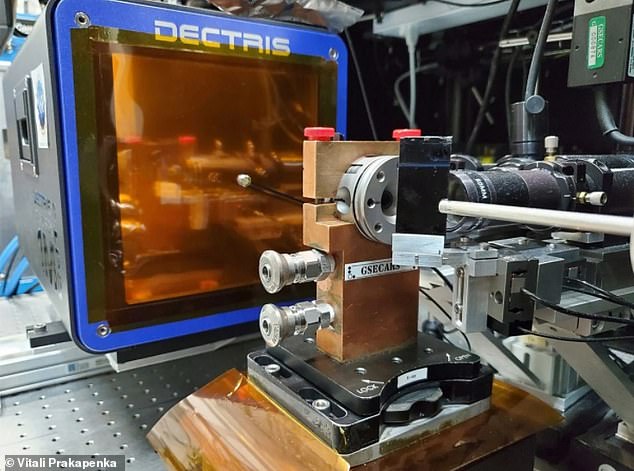 Scientists used diamonds and a beam of brilliant X-rays to recreate the conditions deep inside planets, and created a phase of water called ‘superionic ice’, at the Advanced Photon Source (APS). They squeezed their ice samples between two pieces of diamond – the hardest substance on Earth – to simulate the intense pressures, and then shot lasers through the diamonds to heat the sample up (apparatus at APS is pictured)

WHAT IS SUPERIONIC ICE?

Superionic ice, also called superionic water, is a phase of water that exists at extremely high temperatures and pressures.

Superionic ice is a special crystalline form, half solid, half liquid – and it’s electrically conductive.

It is simultaneously a solid and a liquid because it is composed of oxygen atoms in a solid crystalline lattice and liquid-like hydrogen.

The successful experiments to create superionic ice were conducted at the Advanced Photon Source (APS), the US government’s high-energy X-ray light source facility in Lemont, Illinois.

It had been thought superionic ice would not appear until the water was compressed to more than 50 gigapascals of pressure – about the same as the conditions inside rocket fuel as it detonates for liftoff – but these experiments were only at 20 gigapascals.

‘It was a surprise – everyone thought this phase wouldn’t appear until you are at much higher pressures than where we first find it,’ said study co-author Vitali Prakapenka, a University of Chicago professor and beamline scientist at APS.

​’But we were able to very accurately map the properties of this new ice, which constitutes a new phase of matter, thanks to several powerful tools.’

The solid form of water (H2O) actually comes in more than a dozen different structures, depending on the conditions of pressure and temperature in the environment.

‘Superionic’ – which shouldn’t be confused with ‘supersonic’ – refers to water that has both solid and liquid properties, which happens when water is placed under extreme pressure and heat.

In superionic ice, the oxygen atoms are closely packed and locked in place, while protons can move through the lattice, similar to atoms and electrons in a metal. 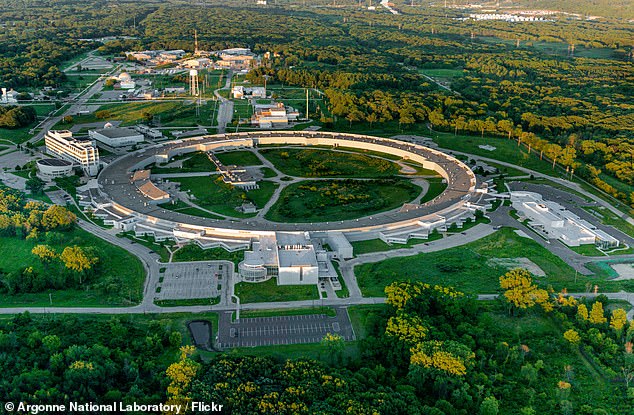 The experiments were conducted at the Advanced Photon Source (APS, pictured), the US government’s high-energy X-ray light source facility in Lemont, Illinois

Its existence has been predicted on the basis of various models and has already been observed under very extreme laboratory conditions.

First theorised in 1988, researchers in the US provided the first direct evidence for superionic ice in 2018.

However, superionic ice had only previously been glimpsed in a brief instant after the researchers sent a shockwave through a droplet of water.

Now, using APS, this team of scientists have found a way to reliably create, sustain and examine the ice.

APS is a massive accelerator that drives electrons to extremely high speeds close to the speed of light to generate brilliant beams of X-rays.

Prakapenka and colleagues squeezed their ice samples between two pieces of diamond – the hardest substance on Earth – to simulate the intense pressures, and then shot lasers through the diamonds to heat the sample up.

Finally, they sent a beam of X-rays through the sample, and pieced together the arrangement of the atoms inside based on how the X-rays scatter off the sample. 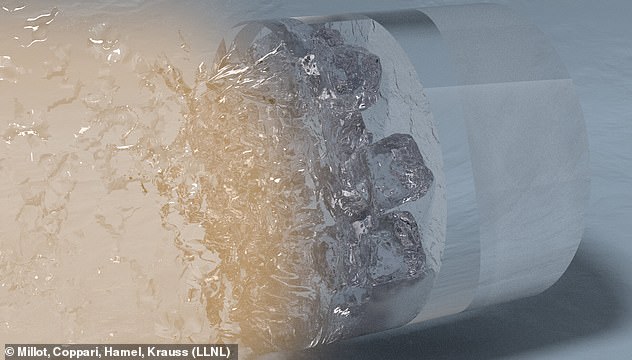 Superionic ice is a special crystalline form, half solid, half liquid. An artistic rendering is pictured

Looking at the structure of the ice, the team realised it had a new phase on its hands, and were able to precisely map its structure and properties.

‘Imagine a cube, a lattice with oxygen atoms at the corners connected by hydrogen,’ Prakapenka said. ​

‘When it transforms into this new superionic phase, the lattice expands, allowing the hydrogen atoms to migrate around while the oxygen atoms remain steady in their positions.

‘It’s kind of like a solid oxygen lattice sitting in an ocean of floating hydrogen atoms.’

This has consequences for how the ice behaves – it becomes less dense, but significantly darker because it interacts differently with light.

According to Prakapenka, the full range of the chemical and physical properties of superionic ice have yet to be explored. 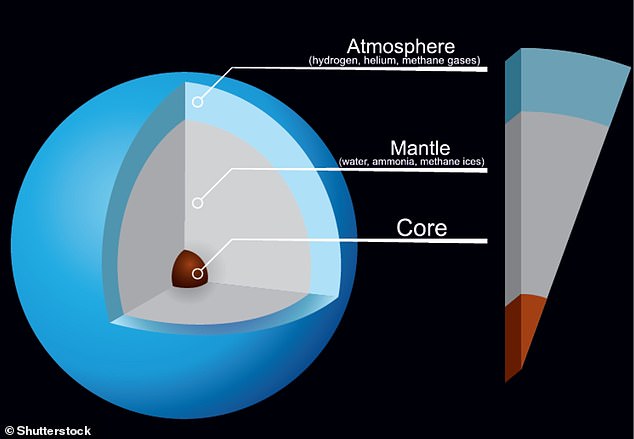 Superionic ice is formed at extremely high temperatures and pressures at the centre of planets like Neptune and Uranus in the outer solar system. Pictured is a cutaway of Uranus

Mapping the exact conditions where different phases of ice occur is important for, among other things, understanding planet formation and even where to look for life on other planets.

Scientists think similar conditions exist at the interiors of Neptune and Uranus, and other cold, rocky planets in other solar systems – known as ‘exoplanets’.

The properties of these ices play a role in a planet’s magnetic fields, which have a huge impact on its ability to host life.

Earth’s powerful magnetic fields protect us from harmful incoming radiation and cosmic rays, whereas the surfaces of barren planets Mars and Mercury are exposed.

Knowing the conditions that affect magnetic field formation can guide scientists as they search for alien life.

The new achievement has been published in the journal Nature Physics.

MIND THE GAP! OUR EARLY SOLAR SYSTEM WAS DIVIDED INTO AN INNER AND OUTER REGION EITHER BY JUPITER’S GRAVITATIONAL PULL OR STRONG WINDS BLOWING MATERIAL OUTWARDS

Our early solar system had a gap between its inner and outer regions even when it was just a swirling mass of gas and dust, a study reveals.

The mysterious gap, described as a ‘cosmic boundary’, existed around 4.567 billion years ago, when the solar system had just formed.

It grew to form what is today the gap between Mars and Jupiter, separating the inner and outer planets.

The study was conducted by experts at Massachusetts Institute of Technology (MIT), based on analysis of ancient meteorites – fragments of asteroids that have fallen to Earth from space.

Researchers don’t know exactly what created the gap, but it could have been caused by a young Jupiter or a wind from the solar system emerging.

This physical separation from the gap could have shaped the composition of the solar system’s planets, by keeping material on either side of it from interacting.

Read more: Our early solar system had a gap between its two regions, study finds