Boris Johnson’s government is drawing up a new industrial strategy that focuses on science and technology, the prime minister’s push to help the UK’s underperforming regions, and green energy.

Business secretary Alok Sharma is ripping up former prime minister Theresa May’s white paper on industry strategy and producing a new document this autumn, partly because of the impact of the coronavirus crisis.

The new strategy will reflect the priorities of Dominic Cummings, Mr Johnson’s chief adviser, by having a heavy focus on science and technology.

Mr Cummings is keen to create a government funded body to drive the development of cutting edge technologies, modelled on the US Defense Advanced Research Projects Agency, which was set up in the 1950s and supported innovations including the infant internet.

The new document on industrial strategy will include a “road map” about which sectors and regions should be the focus of future government investment, according to people briefed on the plan.

Mr Johnson won the 2019 general election on a pledge to “level up” the UK’s underperforming regions.

Britain ranks as one of the more regionally unequal economies in the developed world, according to figures from the OECD, the Paris-based international organisation. London is far ahead of other regions in terms of gross domestic product per worker and productivity.

The new industrial strategy will emphasise the importance of cities beyond London, such as Manchester and Birmingham, as well as the science and technology corridor between Oxford and Cambridge.

But ministers must also decide which industries to prioritise, given that some of the UK’s most cutting edge sectors, such as aerospace, have been hit hard by the Covid-19 pandemic.

READ  Closing churches again should be avoided at all costs

A spokesperson for the business department said industrial strategy was being updated to remain “relevant” and to reflect the government’s priorities.

“It is our ambition to have an industrial strategy which puts the UK at the forefront of global technological opportunities, boosts productivity across every part of the country and supports our green recovery from coronavirus,” added the spokesperson. 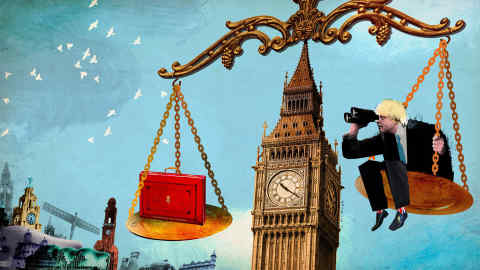 The new industrial strategy will include government efforts to improve the UK’s ability to respond to future pandemics, for example by increasing the country’s capacity to manufacture personal protective equipment for health workers.

Although the strategy is being billed as a break with the white paper produced by Mrs May’s government, there are expected to be overlaps between the two documents.

For example, the white paper identified artificial intelligence as a priority, and the new document is also due to also focus on AI.

Stephen Phipson, head of Make UK, the manufacturing sector trade group, said it was “essential” for the government to set out a post Covid-19 “long-term vision and strategy” that put industry at the heart of the economy.

“As we rebuild our economy there are going to be massive opportunities in areas such as clean energy, infrastructure and transport,” he added. “We have a once in many a generation opportunity to build a new industrial revolution.”

‘Thousands’ of people unable to get an NI number due to