Samsung has had to apologise to its UK smartphone users after they unexpectedly received a random notification during the night.

The notification, which simply said ‘1’ twice and was sent by Samsung’s Find My Mobile service, drained as much as 20 per cent of users’ batteries.

Samsung smartphone users have suggested that the notification could be due to a security breach due to the fact they’ve never even signed up for the service.

After being prompted for an explanation on social media, Samsung took to Twitter to apologise for the notification, which was unintentional. 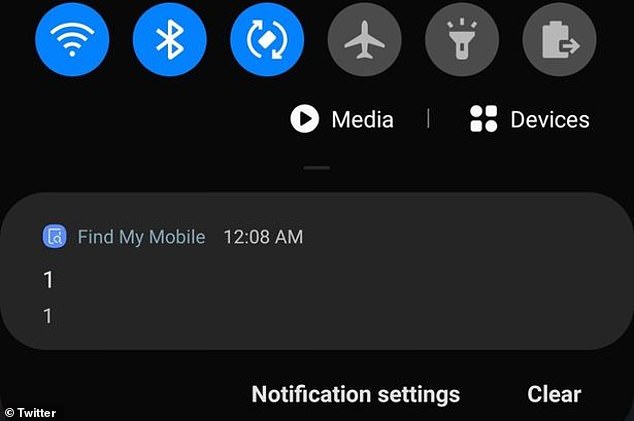 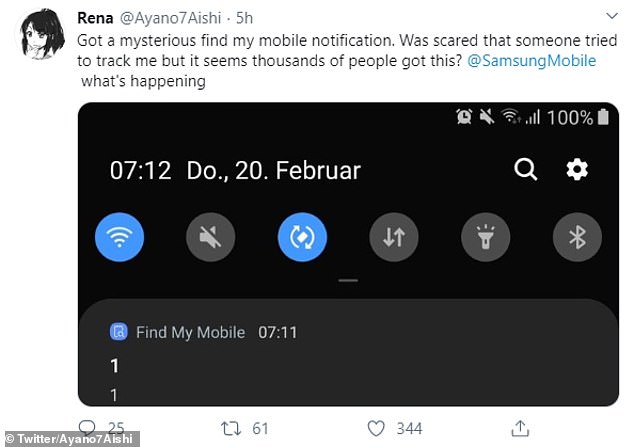 Some Twitter and Reddit users were concerned by the notification, which they thought may have been evidence of a hack

WHAT IS FIND MY MOBILE?

Find My Mobile is a service provided by Samsung that helps their mobile customers locate their device.

It shows them a pin-drop on a map denoting the whereabouts of their phone or tablet.

Find My Mobile can even be used to unlock user phones if they forget their PIN or password.

To use this service, Samsung phone users must be signed in to your Samsung account on their device.

‘This notification was confirmed as a message sent unintentionally during internal testing and there is no effect on your device,’ the company said.

‘Samsung apologises for any inconvenience this may have caused to our customers and will work to prevent similar cases from occurring in the future.’

Irritated users had taken to Twitter to rant about the notification and asked why it drained their battery.

‘I would be really grateful for an explanation,’ said Twitter user @MissCarrieW.

‘Really freaked me out this morning as I was fast asleep when the notification (and assumed test) happened.’

‘That Samsung ‘find my mobile’ notification everyone just got could easily be from an episode of Black Mirror,’ said another Twitter user, @The_L3mming_.

‘The fact the app has nabbed over 10 per cent of my battery doesn’t feel very comforting either. Security breach for sure.’

‘The ‘find my mobile’ app used up 7 per cent of my battery when this happened,’ @maofbepis said.

‘Some are reporting up to 20 per cent. Care to explain this drastic battery usage?’

Users who clicked on the notification found that nothing happened other than a substantial loss in battery power.

One Reddit user said they received the Find My Mobile notification even though they had never signed up for the service, asking if they should be concerned of a possible breach.

Like just about everyone else on Samsung phones worldwide I got a notification from Find My Mobile containing only “1” chars.

This screwup by Samsung is bad enough but the fact it drains a whopping 16% of my battery is, well …WTF? How inefficient is this? Turning off!

Some Samsung phone owners were still unhappy after the apology, with many complaining of the unwelcome distraction from a good night’s sleep.

Rob Baillie, mobile comms expert at Compare My Mobile, said: ‘Although it has now become apparent that Samsung’s ‘Find My Mobile’ notification was nothing to be alarmed about, it certainly caused a lot of consternation amongst owners.

‘That’s understandable given that it was sent at a time when trust in tech companies’ commitment to privacy is at an all-time low.

‘Belatedly, Samsung confirmed that the message was unintentionally sent during testing, but users across the globe are still sure to be concerned that this happened, and questions of security will arise.’

Samsung is yet to respond to MailOnline’s request for comment.

Have I already had coronavirus? How would I know and what should I do?

Pandemic shaming: is it helping us keep our distance?

'The moment everything changed': Covering Covid-19 from Westminster