Catalans Dragons full-back Sam Tomkins has been voted the Rugby League Writers and Broadcasters Association player of the year for the third time.

“I’m reaping the rewards of the guys in front of me playing well,” he said.

“The season’s gone well for me but it goes hand in hand as a full-back, you can play well if the guys in front of you are doing well.

“We’ve got players in the team that have been eight and nine out of 10 all year and, for me to play in a confident group on the front foot, as a full-back that gives you the opportunity to play well.”

The French side take on Hull KR in Perpignan on Thursday for a place in next month’s Super League Grand Final at Old Trafford.

Guasch has overseen Les Dracs’ rise since their entry into Super League, including their 2018 Challenge Cup win, and weathered the financial impact that the coronavirus pandemic had on their 2020 season. 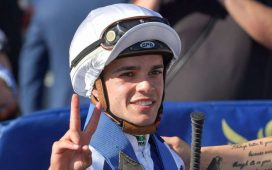