But the Mayor of London criticised the Government for measures such as the 11pm kicking out time in pubs.

Theatres can also reopen with certain restrictions in place. Indoor mixing between households is banned.

Mr Khan said: “Londoners have done exactly what has been asked of them since the start of this pandemic, and their monumental sacrifice managed to keep the number of cases lower in our city than most other parts of the country since the summer.

“Cases are gradually falling in most boroughs across the capital, and that’s why it is the right decision for London to have been placed in Tier 2 of the new Covid restrictions when lockdown ends.

“While we now know what restrictions will be from next Wednesday, there remains almost a week of lockdown still to go and it’s absolutely vital that Londoners continue following the rules to reduce the spread of the virus.”

He added the decision was a welcome boost for businesses who can open their doors to make preparations for Christmas but called on the Government to scrap the 11pm curfew.

“It’s a real blow to pubs, bars and restaurants which have endured such a difficult year and deserve better,” the mayor added.

He said: “CAMRA has been clear – we do not think that evidence has been produced to justify extra restrictions on hospitality, and particularly wet-led pubs, but if the Government wants to proceed, they must announce more financial help.

“It is really very simple — hospitality businesses have been singled out for extra restrictions, so they must be given dedicated support.”

Many areas across the country have been placed in higher tiers than before lockdown. Boris Johnson urged people to stand firm in the battle against coronavirus during the winter months by sticking to social distancing and self-isolation rules.

The proportion of Londoners infected with Covid-19 appears to be falling and could be as low as 0.78 per cent of the capital’s population, it was revealed today.

Latest figures from the Office for National Statistics showed London had the fourth lowest regional infection rate in the country of 0.9 per cent on November 18, and remained below the England-wide average. 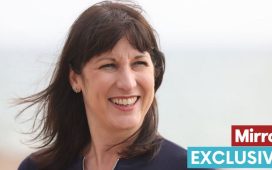