London Mayor Sadiq Khan has called for a “full, independent” probe into the policing of last night’s vigil in memory of Sarah Everard.

The Mayor said he had asked both Her Majesty’s Inspectorate of Constabulary and the Independent Office for Police Conduct to investigate the actions of police officers at the vigil.

He said he had asked Met Commissioner Cressida Dick and her deputy to come to City Hall to offer an explanation.

“I am not satisfied with the explanation they have provided,” he said in a statement.

Police grabbed and dragged away a number of women who were stood within the bandstand on Clapham Common, prompting jeers and screams from the crowd.

More people were detained amid pushing and shoving after police asked the crowd to leave, telling the mourners the gathering was in breach of Covid-19 lockdown restrictions, though many refused.

Scotland Yard has been slammed for its handling of the gathering and for its earlier refusal to allow a vigil to take place despite promises it would be Covid-secure.

Mr Khan added: “I will now be asking Her Majesty’s Inspectorate of Constabulary [HMIC] to conduct a full independent investigation of events yesterday evening and in previous days. I am also asking the Independent Office for Police Conduct [IOPC] to investigate the actions of police officers yesterday evening.”

He added: “It is vital that these events are not allowed to undermine the powerful calls since Sarah’s murder for meaningful action to finally stop men inflicting violence on women.

“It was clear before yesterday that there isn’t adequate trust and confidence from women and girls in the police and criminal justice system more widely.

“Further steps must now be taken to address this.” 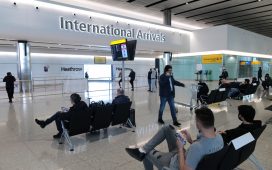