The crew of a fishing boat have told of how they witnessed a stricken Russian submarine make an emergency ascent right in front of them after it caught fire.

The fishermen were sailing towards Kildin Island, in the Barents Sea, when they claim to have seen the submarine – believed to be the top-secret Losharik – surface around 9.30pm on Monday.

One crew member, who spoke anonymously because they were fishing illegally, described how men were running around on deck before a warship and two tugboats quickly pulled up alongside the submarine.

A Russian fishing boat crew have told of how they saw a submarine – believed to be the AS-12 Losharik, pictured – surface near Kola Bay around 9.30pm on Monday night 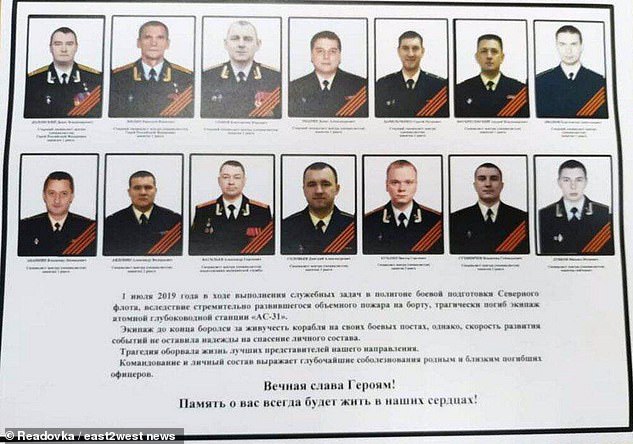 The crew said men were running around on deck before the sub was joined by a warship and two tugboats. They didn’t see any smoke, and only learned later about the fire and the fact that 14 submariners (pictured) had died

Speaking to SeverPost, the man said: ‘We were moving towards Kildin in the evening, and here, around 9.30pm, a submarine pops up.

‘It came up completely. I’ve never seen anything like it in my life.

‘On the deck, people were running, scurrying around.’

Pulling into an isolated bay, the crew of the fishing boat watched the rescue operation for around an hour and a half until the rescue boats moved away.

The fisherman added that the submarine moved away quickly, apparently under its own power, and they did not see any smoke.

The submarine and its escort sailed into the nearby Kola Bay towards Severomorsk, where it is currently docked.

It was only later that the fishermen heard that bodies had been brought ashore.

In total 14 submariners died in the fire, which Moscow says started in a battery compartment before quickly spreading.

Russia has named the 14 men who died in the accident, but otherwise the accident has been cloaked in secrecy.

It was revealed on Friday that all of the victims will be buried in ‘secret’ funerals that will take place in St Petersburg.

President Putin also bestowed top state honours on all of the men – including four who were given the Hero of Russia, the country’s most prestigious honour.

The other ten men will be posthumously awarded the Order of Courage. 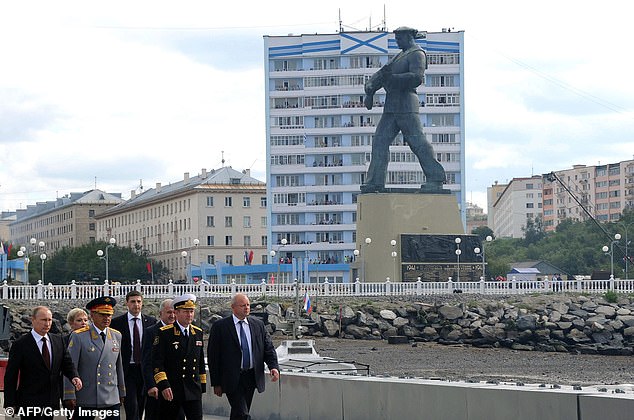 After around an hour and a half the crew said the submarine seemed to move away under its own power towards the port of Severomorsk (pictured, Putin at the port in 2014)

‘All of them will be buried in secret, at the request of their family members,’ reported Fontanko news service.

‘Only close friends, family members and comrades will be at the funerals.’

In previous cases of major Russian national disasters, funerals have often been held in public.

It had been reported earlier this week’s victims would be buried close to the dead from the stricken Kursk submarine which was lost in 2000.

Russia has made clear full details of the latest submarine losses will not be made public for national security reasons.

Moscow military analyst Colonel Viktor Baranets revealed that the fire broke out after some kind of ‘explosion’ while the vessel was almost 1,000ft underwater.

Writing for the Komsomolskaya Pravda newspaper, he said the high-ranking sailors battled for an hour and a half to bring the blaze under control.

The blaze was so hot that crew members ‘had no time to use special breathing devices’.

Despite this the ‘selfless, decisive actions of the crew saved the submarine and ensured it was tugged to Severomorsk military base’.

The nuclear power unit on board was not damaged by the inferno and no leakage occurred, it is reported.

Barenets, a retired officer who is a respected analyst, echoed reports today citing Vladimir Putin that the fire ignited in the vessel’s battery compartment.

But citing his own sources he said it has been caused by a short circuit and involved an ‘explosion’.

‘According to preliminary information obtained by the special commission (investigating the accident), the reason of the emergency was a short circuit in the power system of the (submarine) that caused a fire in the room for accumulating batteries,’ he wrote.

‘When the concentration of hydrogen here is over three percent, an explosion followed by a fire occurs.

‘This is what happened.

‘The fire developed ‘at hurricane speed’. 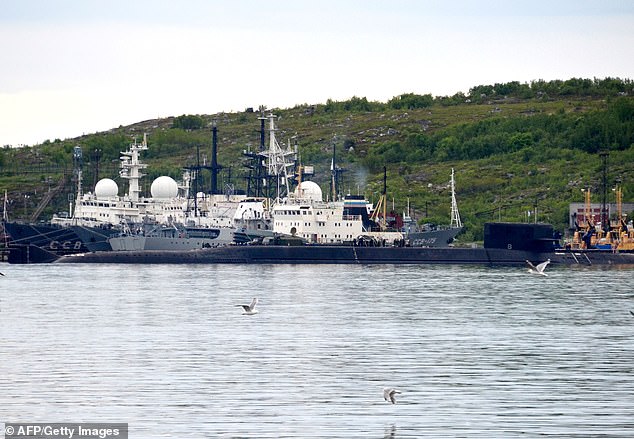 The top-secret submarine is now docked at Severomorsk, though Moscow has revealed little else (pictured, a submarine at the port on Tuesday. It is not clear if this is the submarine that caught fire)

‘That is why some members of the crew had no time to use special breathing devices.

‘The masks were simply melting.

‘And even in these conditions, the badly burned submariners were rescuing each other.’

Barenets said that the members of the crew are expected to be honoured for their actions when the vessel was hit by fire.

The dead will be honoured posthumously, he said.

‘All the submariners, both perished and survivors, will be awarded with Order of Courage,’ he wrote.

‘One member of the crew will be recommended for the award of Hero of Russia.’

Two of those killed in the incident were already Heroes of Russia – the country’s highest award.

Russia has named the fatalities as:

Reports say Solovyev rescued a ‘civilian expert’ on board the submarine.

The civilian left the burning section of the vessel and the crew member shut the hatch behind him and stayed in alongside other crew members ‘fighting to save the vessel’, said the defence ministry.

Solovyev was 37, and he left behind a pregnant wife and three year old son, say reports.

'Feels good to be out of my house': Biden lays Memorial Day wreath in Delaware