MOSCOW — Russia is increasing military support for its Central Asian neighbors, with the U.S. deadline for withdrawing troops from Afghanistan fast approaching.

Over the past month, Russia has held large-scale joint military exercises, signed new military cooperation agreements and moved to integrate its air defense system with its partners in Central Asia. Moscow says these moves are meant to help Central Asian governments defend themselves against terrorist threats emanating from Afghanistan, but some experts contend that their real aim is to counter America’s potential next moves in the region.

“Russia is primarily interested in strengthening its military and political clout in Central Asia, the soft underbelly of the Russian Federation,” said Andrei Serenko, head of the Center for the Study of Modern Afghanistan. “The situation in Afghanistan is viewed first and foremost as a threat capable of jeopardizing Russia’s influence in the region.”

Nearly 30 years after the collapse of the Soviet Union, Russia still maintains a significant military footprint in Central Asia. Moscow is the region’s largest arms supplier and has thousands of troops stationed at bases in Kazakhstan, Kyrgyzstan and Tajikistan. Those three Central Asian republics are also members of the Collective Security Treaty Organization (CSTO), a Moscow-led military alliance including several post-Soviet states.

U.S. President Joe Biden’s announcement earlier this year that he would withdraw all American troops from Afghanistan by Sept. 11 has pushed Moscow to look for ways to bolster those ties.

In late April, Russia held a large-scale exercise with Tajikistan involving over 50,000 military personnel and 700 units of military hardware, ranging from fighter jets and tanks to rocket launchers and artillery. The drills took place near Tajikistan’s southern border with Afghanistan and centered on a border breach scenario.

Days after the conclusion of the exercise, Russian Defense Minister Sergei Shoigu traveled to Tajikistan to sign an agreement to establish a joint air defense system. Shoigu also stopped in Uzbekistan, where he announced that the Russian and Uzbek defense ministries had adopted a four-year “strategic partnership” program, the first of its kind.

Ahead of Kyrgz President Sadyr Japarov’s visit to Russia on Monday, the Kyrgz Defense Ministry announced that the country would host a joint military exercise under the auspices of the CSTO in the coming months. The exercise is expected to feature 4,000 troops from Russia, Kazakhstan, Kyrgyzstan, and Tajikistan.

One of the Kremlin’s top priorities has been to strengthen the 201st military base in Tajikistan, Russia’s largest base in Central Asia. On Tuesday, Russian newspaper Izvestia reported that Moscow is preparing to supply its troops at the base with fourth-generation portable air defense missile systems, citing sources within the Russian Defense Ministry. 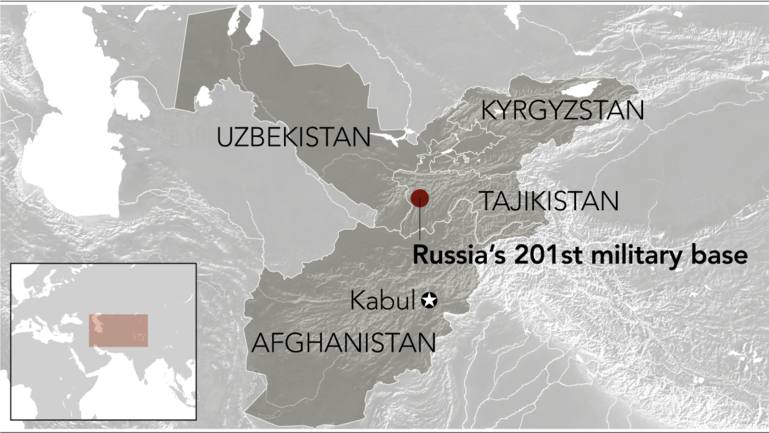 Although the Kremlin has long criticized the U.S. war in Afghanistan, its response to the Biden administration’s pullout plan has been more ambivalent. While praising the decision as long overdue, senior Russian officials have also expressed concern that an outbreak of violence in Afghanistan could spill over into Central Asia, creating a political crisis in Russia’s backyard.

In a March interview with a Kazakh news outlet, Shoigu warned that Afghanistan was at risk of becoming a safe haven for extremist groups and drug traffickers following the U.S. withdrawal. “Large groups of terrorists are moving to different countries, including Afghanistan,” he said. The Islamic State group “has already appeared there, and we are observing the arrival of those who, firstly, left Afghanistan for Syria, and plus those who came from Syria to another country are added to them.”

Alexey Leonkov, a military analyst for the influential Russian defense journal Arsenal of the Fatherland, told Nikkei Asia that Russia viewed IS, not the Taliban, as the greatest threat in Afghanistan. He explained that although Moscow had misgivings about the Taliban’s jihadist past, it was holding out hope that the Islamist group could moderate its stance and help form a more stable government.

“If the situation in the region deteriorates and Afghanistan adopts the black flag of the Islamic State, then that will become a problem for all countries bordering it and it will be necessary to wage full-scale military actions,” Leonkov said.

IS established a branch in northern Afghanistan in 2015, with the eventual aim of expanding into South and Central Asia. In 2018, Russia’s envoy to the United Nations, Vasily Nebenzia, stated that the group had over 10,000 active fighters in Afghanistan. Recent estimates from the U.S. and Afghan militaries suggest a much lower figure: between 1,000 and 2,500. Leonkov said that bolstering air defense capabilities in Tajikistan would help Russia counter potential drone attacks by IS. In recent years, the group has launched such strikes against U.S. troops in Iraq and Syria.

But some experts argue that beyond deterring terrorists, Russia’s recent moves in Central Asia are meant to keep the U.S. out.

Serenko of the Center for the Study of Modern Afghanistan said Russia is concerned that following the withdrawal of U.S. forces from Afghanistan, some or all of those troops could be redeployed in Central Asia — a region that is also a key focus of China’s Belt and Road infrastructure initiative.

“Moscow considers this threat [of a U.S. redeployment] to be important and unacceptable and it will do everything it can to make sure there is no American base in the region,” he said.

The concern is not purely hypothetical. Earlier this month, The Wall Street Journal reported that the Biden administration is looking to reposition some of its forces from Afghanistan to either Tajikistan or Uzbekistan, citing U.S. officials.

Although the prospect of either country hosting a U.S. military base remains distant, Serenko warned that Russia could not afford to completely dismiss the possibility. He noted that the U.S. military presence in Afghanistan had provided the countries of Central Asia with a de facto “security umbrella” over the past 20 years, something they might be reluctant to give up. 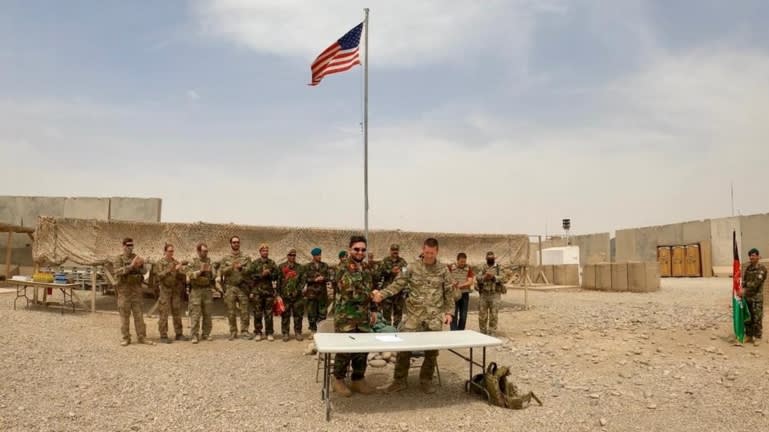 The U.S. Army hands over a base to the Afghan Defense Forces on May 2, ahead of the planned full withdrawal by Sept. 11.

“I could imagine some Central Asian governments agreeing to host a U.S. military base on their territories simply because working with the Americans is more familiar,” Serenko said. “The Americans have shown that although they didn’t have much success battling the Taliban in Afghanistan, they are completely capable of providing security to the southern frontiers of Central Asia.”

Further complicating matters for Moscow are swirling questions about the CSTO’s unity and effectiveness. Last October, the CSTO declined to intervene in the war between alliance member Armenia and Azerbaijan over the break-away region of Nagorno-Karabakh, since the hostilities did not take place on Armenian soil. Armenia would go on to lose the war and was forced to make territorial concessions to Azerbaijan.

More recently, in late April, Tajik and Kyrgyz soldiers exchanged gunfire at the border following a water dispute by local residents. Although the conflict was quickly brought under control by the governments of both countries, it left dozens killed, hundreds injured, and tens of thousands of Kyrgyz civilians displaced.

Serenko told Nikkei that if Russia wanted to prevent the appearance of U.S. military bases in Central Asia, then it needs to reassure its CSTO allies about its ability to respond to a potential crisis in Afghanistan.

“The U.S. withdrawal from Afghanistan will raise the question to what extent the CSTO is an effective and attractive bloc,” he said. “Moscow will have to demonstrate the benefits of CSTO membership, the importance of this project.”