The RSPCA has warned that there may be a looming dog welfare crisis as new figures reveal a 650 per cent surge in the number of searchers for puppies to buy.

The UK animal welfare charity is urging those thinking of welcoming a dog into their home to ‘adopt, not shop’ — and fully consider the responsibility they are taking on.

Government figures also show a doubling of the licences issued for commercial dog imports from 5,964 in June–August 2019 to 12,733 in June-August 2020.

The rising demand appears to be fuelling an increase in the import of puppies bred overseas — where conditions are harder to be sure are humane, the charity said. 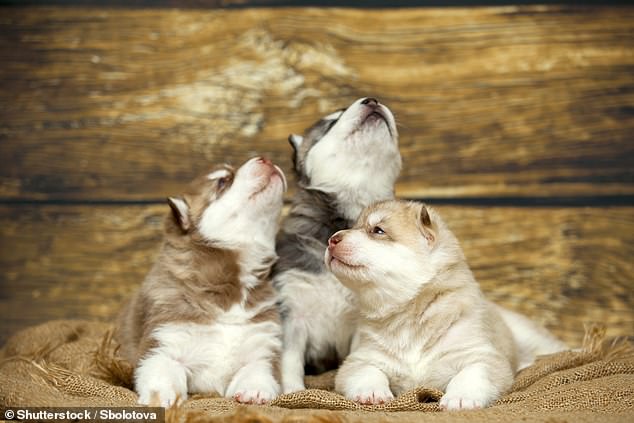 The RSPCA has warned that there may be a looming dog welfare crisis as new figures reveal a 650 per cent surge in the number of searchers for puppies, pictured, to buy (stock image)

‘It’s wonderful to see that so many people want to welcome dogs into their families and we’ve loved waving so many of our own dogs off into their forever homes,’ said RSPCA dog welfare expert Dr Samantha Gaines.

‘However, we are concerned that some families may not be considering the long-term commitment of taking on a dog and how they’ll care for their new pet post-lockdown,’ she continued.

‘We’re also worried that more families will hand their dogs into rescue due to behaviour problems that have emerged due to changes in routines and set-ups caused by lockdown.’

‘During the past few months we’ve seen more visits to our website from people seeking advice on their dog’s behaviour.’

‘Dogs can be sensitive to changes to their routine and we’d urge anyone who is concerned about their pets’ behaviour to speak to their vet or to a clinical animal behaviourist for help,’ Dr Gaines added.

The RSPCA has responded to more than 94,000 incidents across England and Wales this year — with more than 45,000 relating to dogs.

The charity also rehomed 7,480 dogs last year — the equivalent of one around every hour-and-a-half — and 39,178 animals in total.

Those interested in adopting a pet through the welfare group can visit the ‘Find a Pet’ section of the RSPCA website, which includes current information on the organisation’s coronavirus protocols for rehoming animals 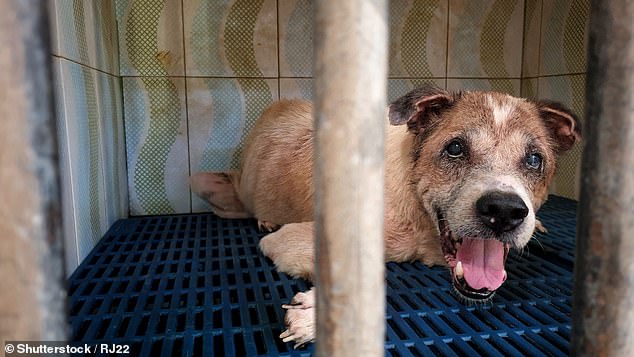 The UK animal welfare charity is urging those thinking of welcoming a dog into their home to ‘adopt, not shop’ — and fully consider the responsibility. Pictured, a shelter dog (stock image)

‘We have seen a rise in people searching for dogs to adopt during lockdown, which is fantastic, but at the same time, there appears to be a rise in people looking to buy puppies,’ said RSPCA chief executive Chris Sherwood.

‘We know that there are not enough puppies bred in the UK to meet the demands of those who want to buy them and, worryingly, there appears to be a surge in puppies coming in from outside the UK.’

‘The problem with this is that, although breeders from countries like Romania are licensed, we have no way of checking the conditions those animals are being kept in and we fear that sales like these could be fuelling cruel puppy farms.’

‘We’re urging people to thoroughly do their research before committing to getting any dog and to make sure they don’t get caught out by people acting illegally or irresponsibly.

We have lots of dogs waiting for their forever homes so please do consider getting a rescue dog.

‘If families would still prefer to buy a dog, we’re encouraging them to use The Puppy Contract. This is a free online tool that will help find responsible breeders and a happy, healthy dog.’

Get up and go: is 54 really the age we lose our passion for life?

Futuristic flying 'AirCar' takes to the skies for the first time

Arctic methane is being released into the atmosphere, scientists claim

COVID-19: mobile game to help children with their mental health during the coronavirus pandemic